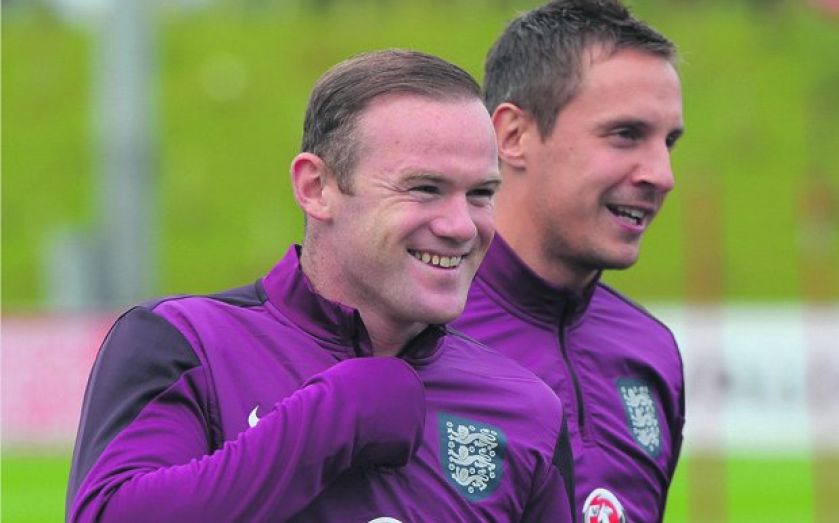 Rooney is fourth on the list of England’s all-time leading goalscorers having netted 41 times in a Three Lions shirt, three strikes behind Greaves and in sight of Sir Bobby Charlton and Gary Lineker, who bagged 49 and 48 respectively.

With Switzerland already dispatched and progress from Group E looking straightforward with Estonia, Lithuania and Slovenia their other opponents, Rooney could feasibly arrive in France for Euro 2016 as England’s greatest marksman.

England average more than six goals in their previous four meetings with San Marino and tonight could provide the perfect opportunity to make ground on Greaves, although Rooney insists goals against the joint-worst team in world football are not his sole focus.

“It’s there, there’s no denying it,” said Rooney. “Jimmy Greaves is there and if I can overtake him this week, in the coming weeks, the coming months then that would be great.

“It’s not something going into the game I’m thinking ‘oh, I’ve got to beat Jimmy Greaves’ record to get close to Bobby Charlton’.

“I’m wanting to do well for the team and if I score goals then great and the most important thing for us is to perform well and to win games.”

England boss Roy Hodgson confirmed he is likely to stick as close as possible to the side which kickstarted their qualifying campaign with victory in Switzerland, with Aston Villa’s Fabian Delph fit to resume his place in England’s midfield after a minor knock.

And like Rooney, Hodgson is not obsessing himself with the volume of goals England score as he believes his side are more than capable of sealing progression from the group outright with emphasis on the points column.

“Quite frankly, I don’t think qualification this time around is going to hang on goal difference so the important thing for me is how we perform,” explained Hodgson.

“At no time in my talks with the players, not once have we mentioned goals and the number of goals scored. For us it’s about the performance and building on what’s good.

“We’re not trying to play anything down but I must also say we’re not suggesting this will be a goal feast.”

The Football Association [FA], meanwhile, is considering taking some of England’s games on the road from 2018, as it considers a long-term usage plan for the national stadium.

England have played all their matches at Wembley since the £757m redevelopment was completed and the 90,000-seat complex reopened in 2007.

Low crowds are an increasing problem with a half-full ground expected for tonight’s fixture with San Marino, while such figures would prompt a sell-out at club grounds.

The FA are also said to be keen to secure an NFL franchise should a London team be established.

SAN MARINO: ALL YOU NEED TO KNOW

ONE WIN, NOT MANY GOALS
San Marino’s greatest moment came in 2004 with a 1-0 win over Liechtenstein, which remains their only competitive victory in 25 years. In 123 games, the European minnows have scored a meagre 20 goals and conceded a whopping 531. Just one of those strikes has come in the last six years – a shock equaliser from Alessandro Della Valle in their forlorn World Cup qualifying match against Poland in 2013, which San Marino proceeded to lose 5-1.

RECORD-BREAKERS
England have netted 26 times in their four meetings against San Marino. However, hitman Davide Gualtieri still holds the record for the fastest goal in World Cup competition with his strike after 8.3 seconds against the Three Lions back in November 1993, a match England went on to win 7-1.

ONE PRO, 10 PART-TIMERS
Defender Mirko Palazzi is the only full-time pro in the San Marino ranks, with the right-back plying his trade for Rimini in the fourth tier of Italian football. The rest are a diverse bunch with a furniture shop worker, lawyer, accountant, office clerk, student and ceramic shop worker set to grace Wembley.

ARE YOU BHUTAN IN DISGUISE?
Goalkeeper Aldo Simonici, also an accountant, has conceded 171 goals in 39 caps so it is no surprise San Marino are ranked joint-bottom of the Fifa world rankings alongside the unheralded Bhutan, Anguilla and Cook Islands. San Marino do head into tonight’s qualifier in some form after beating Italian Serie D side Bellaria Igea Marina and drawing with club side San Marino Calcio in the summer, but lost 2-0 to Lithuania in their opening Euro 2016 qualifier.