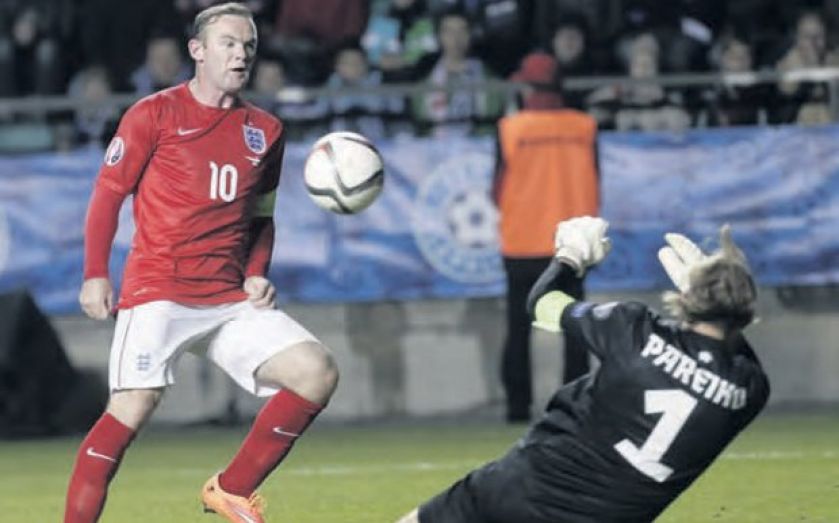 WAYNE Rooney will join a select band of nine England players tomorrow when he wins his 100th cap for the national side against Slovenia at Wembley. The debate will rumble on about what the striker has really achieved in an international career that has stretched over 12 years.

In truth, the highlights have been few and far between. Fading are the memories of the 18-year-old who terrorised defences at Euro 2004, just months after becoming England’s youngest player when coming off the bench against Australia. Instead his performances, like those of his teammates, at a succession of major tournaments have been, by his own admission, poor.

Still, the Manchester United man looks certain to eclipse Bobby Charlton’s England record of 49 goals. One more tomorrow will take him level with Jimmy Greaves on 44, although he reached that haul in just 57 appearances. Rooney’s goal minutes are trading at 26-29 with Sporting Index and are worth a small buy.

Slovenia have emerged as the chief threat to Switzerland in the race for second spot in Group E, with England as short as 1/12 to top it after a 100 per cent start.

The Slovenians have been as high in the world rankings as 15 but are now ranked 36th – a place above England’s opponents on Tuesday, Scotland.

The pair last met at the 2010 World Cup, where Jermain Defoe’s first-half goal proved enough to give England a nervy 1-0 win that took them through the group stages. The previous meeting was a 2-1 friendly win at Wembley in 2009, which was another unconvincing performance.

The Three Lions didn’t impress against San Marino or Estonia in their last two games, and the subsequent performances from Switzerland suggest the opening 2-0 win over the Swiss was not quite as good as we first thought.

This fixture has all the makings of another laboured England win over spirited, but ultimately limited opposition. Sporting Index has pitched England’s supremacy at 1.5-1.7 and a win by a two-goal margin looks right, so buying is advised with the hope Rooney turns it on and leads a rout.

Weak opposition has played its part, but Roy Hodgson’s defence haven’t conceded yet. Iceland and Croatia are the only other teams in European qualifying with the same record. Spread bettors can buy the time of Slovenia’s first goal at 74 with Sporting Index. England are expected to find the net in the 38th minute, but it took them 58 minutes to find a way past Switzerland and 73 to breach Estonia’s backline – so we may have to wait.