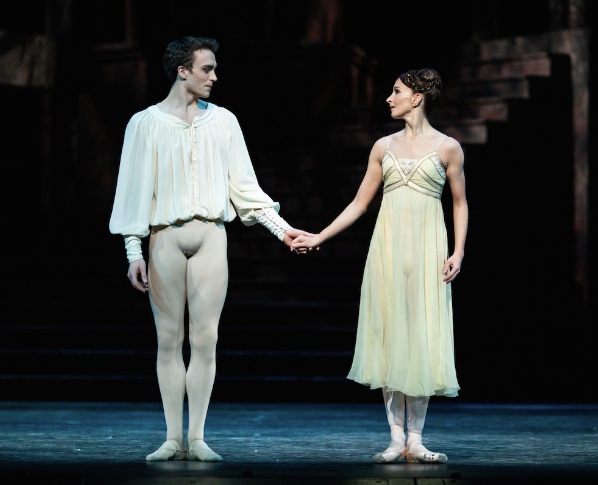 Shakespeare famously trailed his tragic romance with ‘there never was a story of more woe / than this of Juliet and her Romeo”. Big words, Bill. But they hold up in this brutal, speechless version by The Royal Ballet.

The Bolshoi Ballet first brought Romeo & Juliet to the Royal Opera House in 1956, but wouldn’t let a Western company perform it afterwards, let alone one that was going to tour the USA with it, as The Royal Ballet intended to do. A bit miffed that the Russians had taken our thing – our thing – and turned it into a magnificent production, The Royal Ballet was determined to get R&J into its repertoire. So they hired Kenneth Macmillan to re-choreograph the entire thing to debut at the opera house nearly a decade later.

Visually, it takes cues from Franco Zeffirelli’s original production for the Old Vic starring a young Judi Dench, in which she was locked up in a sort of fortress. The set here is similarly classical, all marbled pillars and mausoleums, and the Venetian costuming will be familiar to fans of Zeffirelli’s later film.

Prokofiev’s main theme – sadly better known as the theme to The Apprentice these days – is all brassy pomp and circumstance, lending ensemble scenes such as the masked ball serious parpy heft. This scene, and the ones set in the marketplace, command large numbers and show off the size and diversity of the company brilliantly.

However, after all these years, it’s still Macmillan’s choreography that captivates the most. Notoriously difficult, it manages to be both technically impressive and emotionally raw, as in a powerful moment when Juliet glides backwards and en pointe to her bed, where she simply sits contemplating taking the sleeping draught as the score swells around her. In the final scene, Romeo dances a gruesome pas de deux with what he believes to be her corpse, Juliet’s body acting as a literal dead weight on his shoulders.

Woeful, yes, but in the best, most brutal way possible.