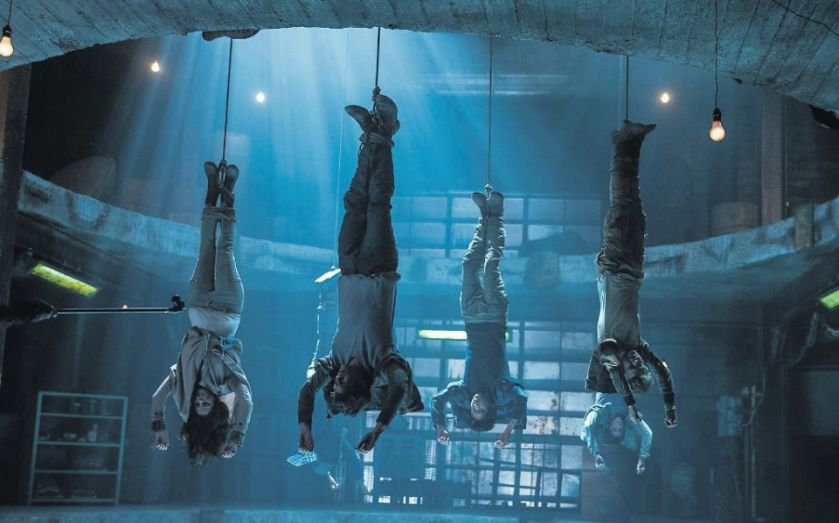 A disaffected older man given a new lease of life by an affair with a young woman? A murder that eats away at the protagonist? If a Woody Allen exploration of the moralities of sex and death seems familiar, it’s because he’s been here many times before. Often with much better results.

This time Joaquin Phoenix takes centre stage as literary professor Abe, who takes a new job in the hope of curing an existential crisis that’s getting in the way of his career and his sex life. Phoenix and Emma Stone, who plays the student Abe is having an affair with, are let down by a wayward plot and slightly hokey dialogue, but both are on fine individual form. Phoenix does middle age malaise incredibly well, and Abe feels more like his creation than he does Allen’s. Stone matches that world-weariness with energy and intelligence, proving far more than a perky love interest.

It’s a tug-of-war between the comedic and dramatic, where lighter moments are bogged down by philosophy, and the more serious ones cheapened by the laughs. At its best it recalls the comic timing of films such as Crimes and Misdemeanours, but a limp, clumsy ending is a stark reminder that this is a director in a low creative gear.

Hot off the heels of surprise hit The Maze Runner, this follow up sees Dylan O’Brien return as Thomas, leader of the “Gladers”. He survived the titular maze of the first movie, only to find himself in a desolate, post-apocalyptic world. Here he must take down the villainous WCKD (World Catastrophe Killzone Department, obvs) and survive a perilous wasteland known as The Scorch.

This year’s other Young Adult sequel, The Divergent Series: Insurgent, followed a strong first movie with a follow up filled with baffling twists and a lot of running.  This is a somewhat more coherent ride but there’s still something missing. The Maze Runner’s intriguing psychological mystery is jettisoned, leaving O’Brien on the run from various villains and Cranks (basically zombies).

O’Brien (pictured) is nothing if not earnest, adding a modicum of gravitas to the increasingly ridiculous scenarios he’s faced with. A slew of familiar faces join him (no doubt scrambling for the blockbuster payday), including  Game of Thrones’ Aiden Gillen as a WCKD operative Janson and Breaking Bad’s Giancarlo Esposito (Gus Fring) as a resistance leader; the rushed pace of the film gives neither much time to make an impression.

The Scorch Trials leaves everything original back in the maze. What’s left is a frenetic but mindless dash to the next instalment. There have been worse YA movies this year, but this won’t be giving The Hunger Games any sleepless nights.

A naked man stands on an empty stage talking about nothing. Or, more accurately, talking about everything – love, life, death, family – but doing it in such a round-about way that it often feels like nothing.

Simon Stephens’ one-man play tells the story of Willem, a young Dutch émigré who returns to Holland for his younger brother’s funeral. The tone is meditative and the words, which take the form of letters to the deceased, are elegant and often funny, but the end result is underwhelming. It’s a poetic little play, but one that feels too small for the Young Vic. Even Eelco Smits’ clever, touching performance can’t quite fill the space.

Willem’s nudity – he sheds his clothes, apropos of nothing, after about 20 minutes – is no doubt intended to express emotional vulnerability, a lowering of defences, but in this sea of subtlety and implicit ideas, you’re really just glad to have something, anything, to look at. And, it turns out, even bums become a little boring after a while.

Old people are weird. That’s the take home message from The Visit, a black comedy-horror from the reliably disappointing M Night Shyamalan. This time two unnaturally precocious children are packed away on a train to visit their mother’s estranged parents in the snowy and remote Pennsylvanian wilderness.

What should have been a softly inspiring familial reconciliation soon takes a turn for the bizarre however, as pop-pop and nana begin to put the “strange” into “I’ve inexplicably sent my young children away to see my estranged parents”. Gramps has a weird old shed that nobody is allowed inside. The kids are instructed not to leave their room after 9:30pm. And nana keeps scuttling around the house at night like a massive spooky spider, clawing at the walls and shrieking like a woman possessed.

Teenage documentarian Becca, armed with the handheld camera that provides the film’s found footage format, wants to investigate the oddness. Meanwhile younger brother Tyler spouts off-tempo, tension-breaking quips in his young-person, hippity-hoppity vernacular. He raps too, which is easily more harrowing a prospect than any number of lank-haired old women cackling outside your bedroom door.

Together the siblings are Goosebumps protagonists given mortal form, and while there are some sweetly awkward scenes of inter-generational misunderstanding early on, the notion of the elderly as the enemy never quite sits right. A few good scares slowly give way to a rapid succession of cheap jump frights – one of which is disarmingly similar to an old internet prank video you might remember – and as the kids try to endure their week of weirdness, the tension slowly dissolves into comedy and farce.

Writer and director Shyamalan has invested heavily in tired gerontophobic horror tropes and the sad mystification of mental illness. Pop-pop’s incontinence forms one of the film’s early frights, while his wife’s dementia is frequently employed to make the elderly couple appear ever more otherworldly and menacing.

Like so many horror films of its kind, The Visit could easily have been averted with an open return train ticket. Either that, or a modicum of responsible parenting on mum’s part. Had the kids been kept at home, we’d all have been spared this janky Shyamalan mess.