Putin is about to win his cynical bet in Ukraine: The West is truly dead 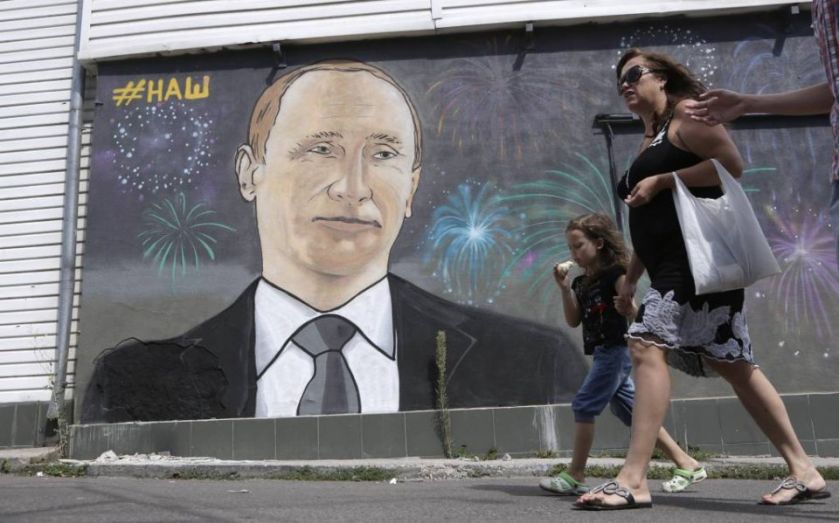 I am becoming worryingly convinced that Vladimir Putin must be a big fan of this column. Just a few days on from me revealing that he is odds-on favourite to become the super-villain in the next Bond caper, the Russian President confirmed my worst suspicions. Falling back on one of his late-Roger-Moore-era stunts, Putin piloted a mini-submarine to the bottom of the Black Sea, supposedly to observe the remarkably intact remains of a Byzantine wreck. Or so he says; it seemed more like an audition to me. But while August is often described as the “silly season” of international politics, Putin continues to win his deadly gamble with the moribund West over Ukraine. Although the low-level conflict between Russia and Kiev still garners the lion’s share of western coverage of what is going on there, it is in the far less assessed realm of economics that the true battle is being waged. On that score, there is little doubt that the Kremlin continues to win its cynical bet that – for all the histrionics and breast-beating over his incursions into Crimea and eastern Ukraine – the West is unlikely to do much of anything practical to bolster the increasingly enfeebled Ukrainian state. Ukraine’s parlous economic condition long predates the present conflict, though it certainly has not helped matters. As someone who once did some business there, its endemic miasma of corruption, lack of rule of law, and almost total disinclination to engage in structural reform made my firm decide that we wanted no part of the place. Primarily due to these long-term and hugely intractable problems, and because I do not think (unlike more hawkish and perhaps less economically realistic analysts) that Ukraine constitutes a primary western interest, I remain convinced that the West should not offer much help to a country that amounts to such a losing proposition. Saying that, Putin has goaded the gormless West into a worst-case scenario diplomatic position. To intentionally mis-paraphrase Theodore Roosevelt, we are speaking loudly, and carrying no stick at all. If the West is truly serious about rescuing Ukraine from Putin’s clutches, it should do so, and now, as negotiations over a deal to save Kiev from default on its debts reach crunch time. If it is not going to do so, it should maintain an eloquent silence. But to bleat loudly and do nothing just reinforces what is fast becoming a global suspicion; namely that the West, which has shaped and preserved the global order since 1945, is well and truly dead. For there is precious little doubt that Kiev is economically on its last legs. Ukraine’s currency, the hryvnia, has declined by more than 60 per cent against the dollar since the start of 2014, while the country’s debt pile is increasingly unsustainable, as much of it is dollar-denominated. The IMF has matter-of-factly proclaimed that debt restructuring is absolutely necessary. The country’s GDP is estimated to have declined by almost one-quarter (23 per cent) since 2012, with a further contraction expected this year of up to 9 per cent. Inflation is set to rise to 46 per cent by the end of 2015. The government in Kiev is demanding that creditors accept a 40 per cent write-down if Ukraine’s debt is to be made sustainable, something they have adamantly refused to do. Given the obvious distress of the Ukrainian economy, what has been the heroic western response? The usual American attention deficit disorder, as it conveniently forgets about the crisis, coupled with Europe’s usual embarrassed silence at its lack of ability to move beyond endless navel gazing toward meaningful foreign policy action of any sort. So far, America has offered up $2bn in loan guarantees for Ukraine, while Europe – which in terms of interests ought to have far more skin in the game than the US – has been even more pathetic. By mid-May 2015, the EU had dispersed a grand total of $1.8bn of economic assistance. I can see Putin’s Cheshire-cat-like grin in the Kremlin from here. As Edward Gibbon made so eloquently clear in his magisterial Decline and Fall of the Roman Empire, one of the classic signs that a great power is on its way down is when it begins to confuse rhetoric with policy reality; feeling good is not the same as doing good, which often requires real sacrifice. Or, as we’d say more bluntly in America, it is past time the West (or what remains of it) either puts up or shuts up about Ukraine.