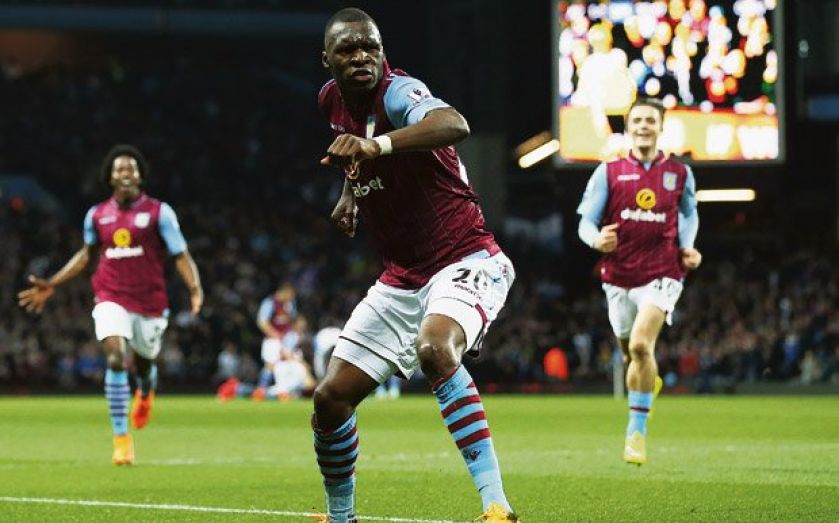 Interim Queens Park Rangers boss Chris Ramsey lamented his side’s defensive frailties after a stunning Christian Benteke hat-trick deprived the Hoops of a potentially priceless victory in their quest for Premier League survival at Villa Park last night.
Benteke rescued a vital point for Aston Villa with a late free-kick, having earlier wiped out Matt Phillips’ opener and fired the hosts into the lead before QPR retaliated through Clint Hill and the prolific Charlie Austin.
QPR have the league’s leakiest defence but are now unbeaten in two away games following Saturday’s thrashing of West Brom and moved up one place to 18th, two points adrift of Hull City and safety, while Villa are now three clear of the relegation zone.
“The goals we gave away were schoolboy errors,” said Ramsey, whose side face champions-elect Chelsea at Loftus Road on Sunday.
“The point was better for them. We would have loved to have won the game and been above the line. Based on the performance in the second half we are disappointed we have not got the three points. But all in all, would I have taken a draw here before the game? I think most people would have expected us to come away with a loss.”
QPR have not won successive away matches in the Premier League since September 1995 but took a seventh-minute lead when an unmarked Phillips headed past Villa keeper Brad Guzan following Bobby Zamora’s cross.
Their lead was shortlived. Villa levelled within two minutes as Benteke maintained his recent renaissance in front of goal by working his way into the visitors’ box and curling past recalled England stopper Rob Green.
Belgium forward Benteke netted again shortly after the half hour mark when strike partner Gabby Agbonlahor outmanoeuvred centre-half Steven Caulker to link with the 24-year-old, who raced clear to clinically deceive Green. The last time QPR completed a league double over Villa the Midlands outfit were relegated at the end of the 1986/87 season, and the Hoops went some way to reviving those demons by equalising 10 minutes after the restart.
Phillips swung over a corner which was steered into the far corner by veteran former Crystal Palace defender Hill, who replaced injured full-back Yun Suk-Young in Ramsey’s starting line up.
QPR regained the lead inside the final quarter of an hour as Phillips wriggled beyond full-back Kieran Richardson before picking out Austin to fire his 17th goal of the campaign past Guzan. The home side salvaged a point after 83 minutes as Benteke directed a free-kick past the dive of Green for his seventh top-flight goal in five matches.
RUN-INS: ASTON VILLA AND BOTTOM THREE
Aston Villa
11 April: Tottenham Hotspur (A)
25 April: Manchester City (A)
2 May: Everton (H)
9 May: West Ham United (H)
16 May: Southampton (A)
24 May: Burnley (H)
Burnley
11 April: Arsenal (H)
18 April: Everton (A)
25 April: Leicester City (H)
2 May: West Ham United (A)
9 May: Hull City (A)
16 May: Stoke City (H)
24 May: Aston Villa (A)
Queens Park Rangers
12 April: Chelsea (H)
25 April: West Ham United (H)
2 May: Liverpool (A)
10 May: Manchester City (A)
16 May: Newcastle United (H)
24 May: Leicester City (A)
Leicester City
11 April: West Bromwich Albion (A)
18 April: Swansea City (H)
25 April: Burnley (A)
29 April: Chelsea (H)
2 May: Newcastle United (H)
9 May: Southampton (H)
16 May: Sunderland (A)
24 May: Queens Park Rangers (H)