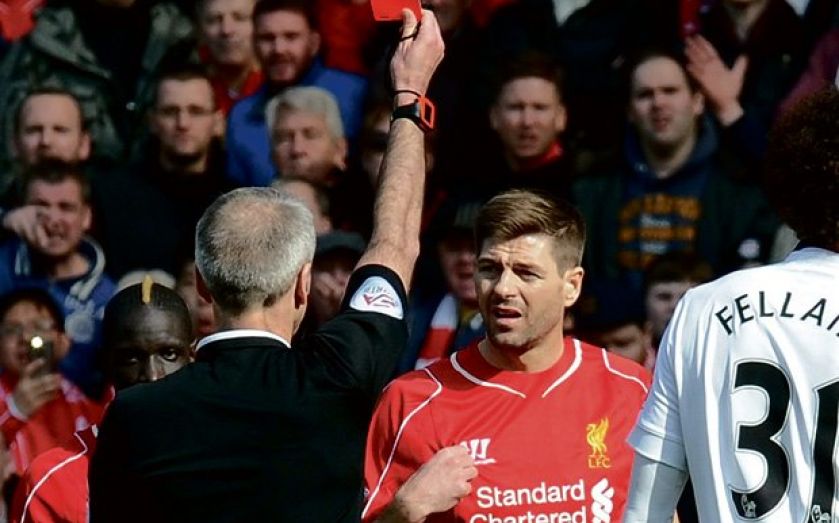 LIVERPOOL captain Steven Gerrard apologised to team-mates, supporters and manager Brendan Rodgers after being sent off just 40 seconds after coming off the bench in yesterday’s defeat to Manchester United.

Gerrard was dismissed for stamping on Ander Herrera early in the second half, as the Reds saw their five-match winning run in the Premier League ended by resurgent top-four rivals United. Liverpool were trailing to midfielder Juan Mata’s strike when Gerrard came on at half-time, and the Spaniard added an acrobatic second after his expulsion, before Daniel Sturridge’s consolation goal.

“I have let my team-mates and manager down today, even more importantly I let all the supporters down and I take full responsibility for my action,” said Gerrard, 34, in his final season at his boyhood club.

Rodgers refused to blame Gerrard for the defeat, which widened the gap between fourth-placed United and Liverpool to five points.

“He was probably frustrated watching us in the first half, we didn’t make a tackle,” said Rodgers. “I won’t criticise him. He has been brilliant since I came here.”

Victory was United’s fourth in a row in the league and followed last week’s equally impressive 3-0 triumph over Tottenham, also vying for Champions League qualification.

Sturridge set up a late, vain Liverpool rally when his 69th-minute deflected shot beat David de Gea at the goalkeeper’s near post.