The price of petrol and diesel dropped for the third month in a row in January, as the cost per litre reduced by more than 1p.

The UK average price of unleaded was 120.92p on average, while diesel was 130.01p, according to research from RAC Fuel Watch published today.

It now costs an average of £65.78 to fill up a 55-litre family car with petrol, coming in at £6 less than the cost at the end of October.

Prices at the UK’s largest supermarkets – Asda, Tesco, Sainsbury’s and Morrisons – were an average 3p per litre lower at 116.66p for petrol and 125.43p for diesel, although prices dropped slower at motorway service stations where a litre of unleaded was 138.87p and diesel was 147.55p. 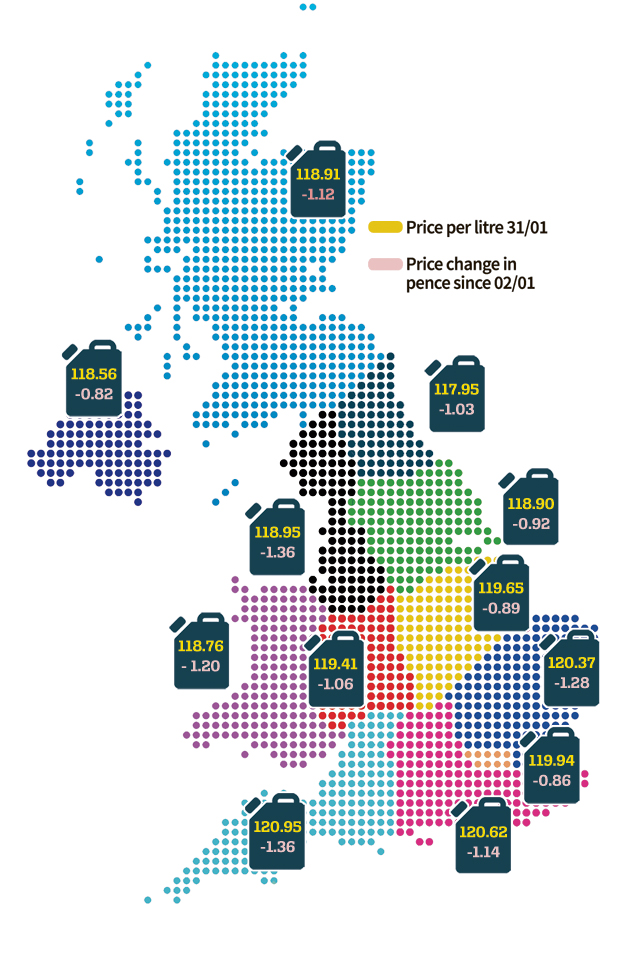 What petrol costs wherever you are in the UK (Source: City A.M.)

However, the RAC has raised concerns that consumers are not benefiting from the maximum possible savings as retailers have not passed on cost reductions made at the wholesale level.

If retailers were to pass on existing savings, the RAC said, the price of petrol would reduce by 3p a litre in the next two weeks.

RAC fuel spokesperson Simon Williams said: “The wholesale fuel market operates very transparently, but the same can’t be said of the retail market. We understand retailers are free to charge what they like for their fuel and that it’s then up to consumers whether they’re prepared to pay their prices or not.

“Unfortunately, consumers don’t have an easy way of knowing whether they are being charged a fair price so they have to trust they aren’t being ripped off. That’s why we always encourage drivers to check the current average price of petrol and diesel, and see if they can beat that price when paying for fuel locally.

“Combine this with the fact some bigger retailers vary their prices from location to location, fuel is an essential purchase for most people and that shopping around it not that easy, and you have the perfect recipe for drivers being charged over the odds.”