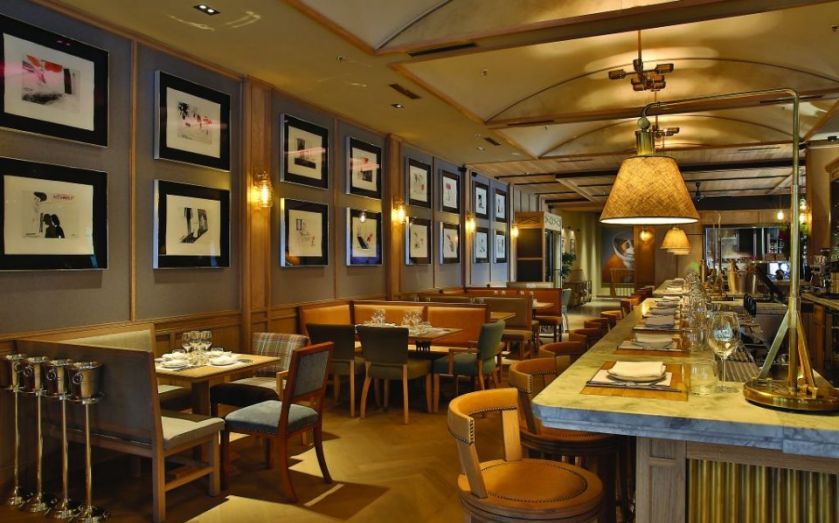 Is there a greater sign of our times than a hospital closing down to be replaced by a modern European restaurant and some offices? It’s the kind of thing politicians go wild for, especially this close to an election.

“I pledge that my government will favour nurses over barbecued langoustines. We need hospital beds, not Jerusalem artichoke risotto.”
But that’s just what happened to Middlesex Hospital, which closed in 2005 – an election year at that! – finally reopening a few weeks ago as Fitzroy Place. The restaurant on the ground floor, Percy & Founders, is a sprawling 200 cover affair with vaulted ceilings and stone archways. It even has a ghostly chapel that lurks behind a glass pane in the dining room; the last remnant of the old hospital.
The decor is earthy, as is fashionable these days, with lots of shades of brown and grey. It gives the impression it’ll improve with age, once it’s been around long enough to have had a few drinks spilled on it and gotten a few scuffs on the furniture.

It seems to be going for a young crowd; the art is of the kind your grandparents would probably disapprove of – a gigantic painting of a dog wearing a cone dominates a stairwell – and it was playing some pretty decent house music, which is unheard of in the restaurant business. The strategy seems to be working – a group of girls in their early 20s were at the table next to us, which made me wonder how on earth they could afford to eat here, because while it’s not wildly expensive, it’s certainly not cheap.
The menu couldn’t scream “spring” any louder if it were covered in pictures of hatching chicks and daffodils. There’s tuna tartare with spring onions, cucumber and a little too much lime; spring vegetables with goat’s cheese; a satisfyingly meaty lobster and prawn scotch egg with a pornographically gooey yolk. There’s lettuce soup, which sounds like it should be a bowl of murky water but is in fact a vivid green concoction thickened with potato and, I suspect, coloured with spinach. It comes with croutons topped with bacon, smoked tomatoes and onion jam – don’t ask me how you dunk them in the soup without the topping tumbling in.

It’s all exceptionally pretty and very well put together, which is to be expected given Diego Cardosa is executive chef. He used to head up the kitchen at Angela Hartnett’s fine-dining Italian Murano, one of the handful of restaurants that everybody in the known world agrees is thoroughly excellent.
Percy & Founders is quite a departure; more relaxed, trendier, aimed at the after-work crowd rather than the foodie who’s going to book six months in advance.

Of the mains, only one was explicitly Italian – tagliatelle with spring greens, nettles and haytor cheese. The pasta was faultless: firm and taut, although it became a bit of a slog about half way through thanks to the sheer amount of butter involved.
The chicken main consisted of  strips of breast separated from its browned skin by a layer of herbs; a fatty cube of leg meat, cooked ever so slightly rare; a little golden chicken pasty so light you could almost fool yourself it's healthy (the menu called it a pie, but it's definitely a pasty).
Dessert was good, too – whipped dark chocolate, caramelised oats and honeycomb was a haphazard pile of delicious sweet things – to hell with presentation. Lemon curd, yoghurt, almond crumble and prosecco sorbet was a more refined affair: light, tart, very nice.

The decor is earthy, as is fashionable these days

This was all washed down by a couple of  glasses of Timotheus Grüner Veltliner, a fantastic Austrian wine that deserves a place on any wine list.
Percy & Founders is a perfectly decent restaurant. I can’t imagine people flocking from far and wide to eat there but if you’re in Fitzrovia, it’s worth trying – it’s so big I doubt you’d have to book. And, to be frank, for caramelised oats that good, I’d advocate shutting down a few more hospitals. Hurrah for gentrification!