Just as it seemed Theresa May was on track to appease the hard-line Brexiters in her party, it’s now the Remainers causing problems. Last week three MPs, Anna Soubry, Sarah Wollaston and Heidi Allen, quit to join the new Independent Party formed by eight breakaway Labour MPs a few days before. More Conservatives have threatened to leave unless the government stops allowing itself to be pressured by the Brexiters within the party.

With Labour now officially backing a second referendum, the government has been forced to offer concessions to MPs in an attempt to reign in the most vocal Remainers, lest the nation be dragged towards another ballot.

As a result, lawmakers will now get a series of votes on three key elements of the UK’s exit from the European Union.

First, the government will give MPs another chance to back Theresa May’s Brexit deal, alongside whatever assurances she has been able to secure from the EU regarding the controversial Irish border backstop.

If that gets rejected, the government will seek explicit consent from parliament to pursue a no-deal Brexit.

And finally, if May’s deal is rejected and the government does not get the backing of parliament for a no-deal exit, the Prime Minister will ask lawmakers if they wish to extend the deadline for Brexit beyond March 29th.

GBP/USD raced higher this week as traders priced in lower odds of a no-deal Brexit and higher chances of an extension to Article 50. It broke the $1.33 handle midweek and has since eased back slightly – sentiment is still overwhelmingly bearish on cable, with 70 per cent of our traders positioned short. 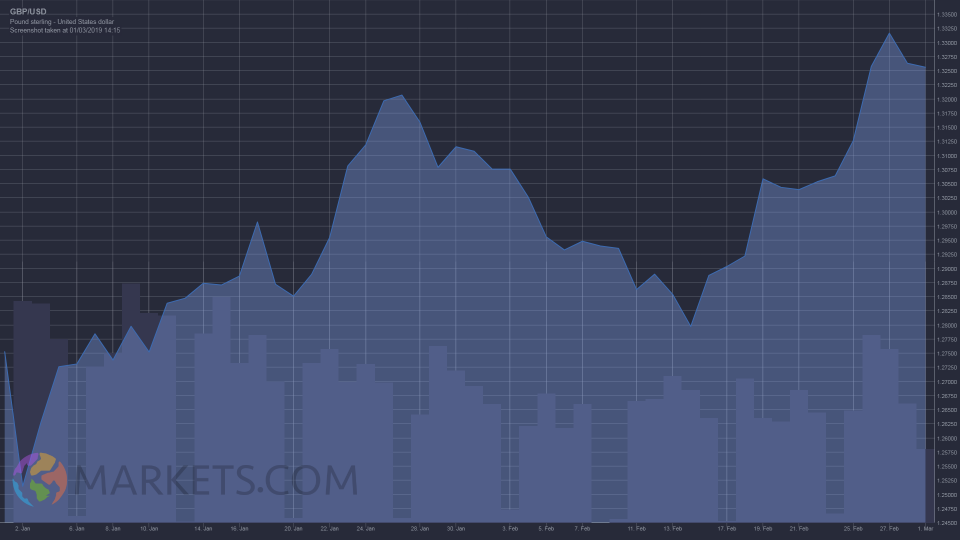 It’s a similar story for the pound against the euro; after EUR/GBP returned to May 2017 lows around £0.8560, sterling eased back again, and our sentiment gauge reveals that nearly 85 per cent are positioned long on the euro.

Sterling appreciation forced the FTSE 100 down from its mid-October highs around the 7,200 handle, with the UK’s blue chip index still down around 100 points. The FTSE is dominated by companies who report their earnings in dollars, hence the downside movement in the face of cable strength.

Is the market too optimistic?

Markets have been pricing in higher odds of a softer Brexit for some time now, but the latest developments have shown that there is still plenty of upside left as progress is made.

Traders are betting that parliament will turn down Theresa May’s deal, although in something of a twist it could be that hard-line Brexiters like Jacob Rees-Mogg’s European Research Group throw their backing behind the Prime Minister. They were initially opposed to the deal, but this wouldn’t be the first time they had softened their stance when faced with the prospect of losing Brexit altogether.

It’s also highly likely that MPs will flat-out refuse to give the government their consent to pursue a no-deal exit. The split here will be more interesting; Remainers and Brexiters alike turned down the original deal – for different reasons – but there are plenty of Brexit-supporting MPs who are happy with, or even hoping for, a no-deal exit.

If no-deal is blocked, parliament surely has no option but to back an extension of Article 50. The risk of a no-deal won’t go away, however. The EU has previously said it won’t back an extension unless there is a high chance that it will result in a new deal that gets the backing of parliament.

EU leaders would much rather extend the negotiating period until the end of the year at least, but Theresa May is likely to seek for just a couple of months’ extra time – a move designed to show Brexiters that she’s not simply trying to delay Brexit to the point it doesn’t happen.

Sterling has a lot of room to the upside, which means the FTSE could see further losses, but markets may be overlooking the fact that a parliamentary vote in favour of extending the negotiating period doesn’t guarantee it will happen. The EU has been reluctant to budge so far, and the downside for the pound could be severe if markets continue to price in the best-case scenario while ignoring the very real barriers to such an outcome.