Outbreak map: Where has Ebola spread to so far? And how many people have died? Here's what you need to know 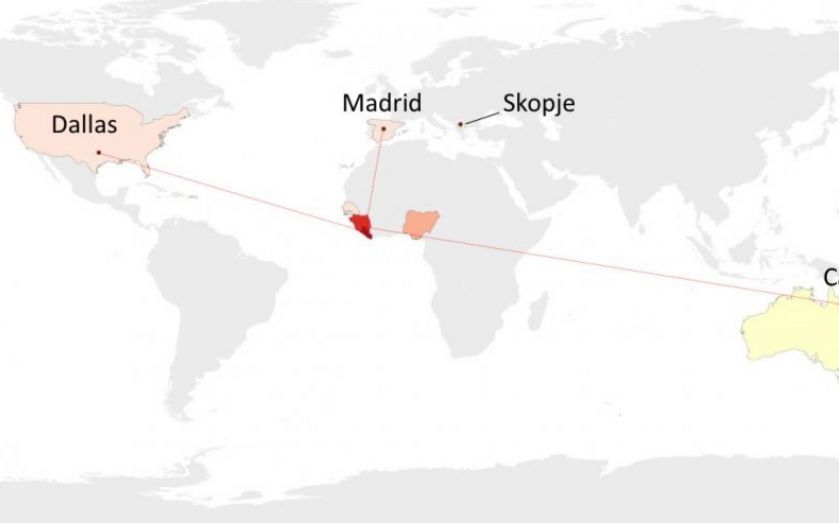 As the Ebola epidemic continues to grip west Africa, there are increasing concerns that it might take hold in Europe, the US or other parts of the world.
On Monday the UK health secretary Jeremy Hunt said that the UK is likely to see "a handful" of Ebola cases over the next few months and the disease has already popped up in isolated incidents in the US and Spain.
The epidemic began in Guinea in February, and has since killed over 3,800 people, according to the latest estimates by the World Health Organisation (WHO).
Of the three main countries affected, Liberia has suffered the most cases and deaths. By 5 October there had been 2,210 deaths there. In Sierra Leona and Guinea there had been 879 and 768, respectively.
When considering speed of infection, it is spreading fastest in Sierra Leone. The number of cases in the past 21 days as a percentage of total cases was 40 per cent, according to WHO. In Liberia and Guinea, cases during this period represented 34 per cent and 26 per cent, respectively.

The below map was updated on 3 November to include the most recent WHO data.

But it is not just people in west Africa who are at risk – in recent weeks, the disease has also made its way to countries outside of Africa, sounding alarm bells for the international community as it already struggles with the burden of trying to eliminate the outbreak inside Africa.
The map below shows the travel routes the virus may have taken in recent weeks. Yellow represents countries with only suspected cases. Darker coloured countries have had larger numbers of confirmed patients.

US
Earlier this week, the first person to be diagnosed with the disease in the US died at a Dallas hospital, Texas.
Liberian Thomas Eric Duncan arrived at Dallas on 20 September, but soon fell ill and was taken to hospital on 28 September.
Now a second person, a hospital worker who treated Duncan, has tested has tested positive.
Health officials have identified a further nine people, including six health workers, who had direct contact with Duncan while he was contagious. Another 38 people also may have come into contact with him.

Spain
On Monday, a nurse in Spain tested positive for the disease after treating a repatriated missionary from Sierra Leone in a Madrid hospital. This marked the first case of someone becoming infected with Ebola outside of the African continent.

Australia
A woman who was being tested for Ebola at a hospital in Queensland has had a negative result, according to health officials.
The 57-year-old went to hospital after developing a fever – one of the symptoms of the disease. She had recently returned from a trip to Sierra Leone.
However, six others are being quarantined on suspicion of having the disease. The health authorities in Australia interviewed 651 travellers in the past few months as part of efforts to keep the disease out of the country.
“It’s not impossible that it will come here but what we’re doing is carefully monitoring everyone who’s coming into this country who’s been to West Africa,” Prime Minister Tony Abbott said.

Macedonia
Yesterday it was reported that a British man had died of Ebola in Macedonia, and that another, believed to be his friend, had also contracted the disease.
However it has now been revealed that the man died of unrelated causes.
The country's health ministry had said there were “high chances” it was not an Ebola case, but in a statement it said officials had followed World Health Organization procedure in closing the hotel where the man was staying. It placed the residents in quarantine.

Epidemic to pandemic?
Opinion is split over whether Ebola could make the leap from a localised epidemic in west Africa to a global pandemic.
In an emergency Cobra meeting last month, UK foreign secretary Philip Hammond said he thought it was highly unlikely that the virus would spread in the UK.
"The issue is about the possibility of somebody who has contracted the disease in west Africa getting sick here,” he said. “It is not about the disease spreading in the UK because we have frankly different standards of infection control procedures that would make that most unlikely."
The White House has offered a similar opinion about Ebola spread in the US, insisting that the risk of contagion was lower than that of flu.
“Despite the tragic epidemic in West Africa, US health professionals agree it is highly unlikely that we would experience an Ebola outbreak here in the United States, given our robust health care infrastructure and rapid response capabilities,” it said in a statement.
But Jim Kim, President of the World Bank, said yesterday that the international community had “failed miserably” in its response to the outbreak, and warned that the situation is set to get much worse.
“It’s late. It’s really late,” he said during an interview with the Guardian. “We should have done so many things. Healthcare systems should have been built. There should have been monitoring when the first cases were reported. There should have been an organised response.”
“Now that there are cases in Spain and the US, the chance of the virus going to other European countries is fairly high,” he added.
Here is WHO data showing how the crisis has escalated:
Ebola: Origins and transmission
Officially named the Ebola virus disease (EVD), it belongs to the Filoviridae family (filovirus) of viruses. It first appeared in 1976 as two simultaneous outbreaks; one in Yambuku, Democratic Republic of Congo, and one in Nzara, Sudan.
Every time an epidemic starts, it is because a human has caught the virus from a wild animal through infected bodily fluids. Fruit bats are considered to be the natural host of the Ebola virus, and the disease has historically been found in remote villages in central and west Africa, which are close to tropical rainforests where the bats are present.
Once the animal-to-human barrier has been crossed, human-to-human transmission occurs via contact with any infected bodily fluid, in much the same way as the initial animal-to-human transmission.
The time period between contracting the disease and showing symptoms ranges from between two and 21 days.
Symptoms and treatment
It is described by WHO as a “severe, acute viral illness”, with initial symptoms including a sudden onset of fever, intense weakness, muscle pain, headache and a sore throat.
This tends to be followed by vomiting, diarrhoea, rash, impaired kidney and liver function, and in some cases, both internal and external bleeding.
There is currently no cure for Ebola and no vaccine to protect against the virus, although a number are currently being developed.
Share:
Tags: Ebola