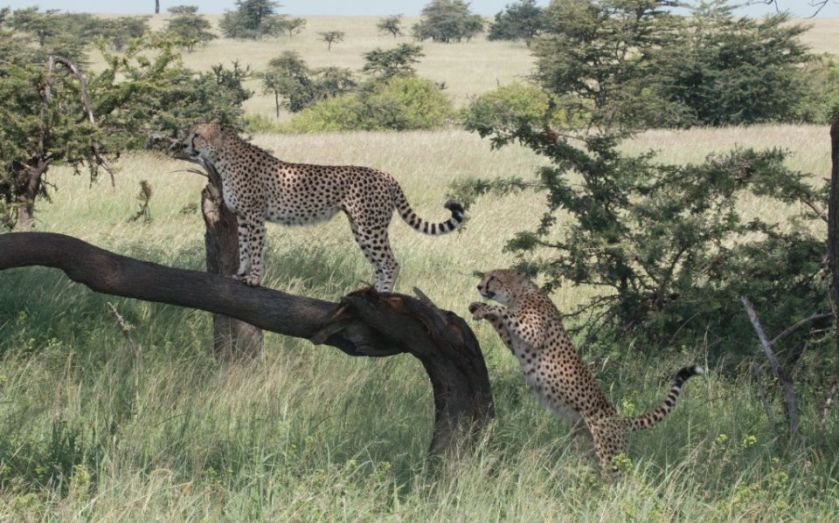 One June morning I found myself in the back of a mud-splattered four-by-four, the savannah sun beating down upon my head, a torrent of profanities drumming my ears, and a full-grown cheetah eyeing me down the barrel of my Canon lens. As she prowled the long oat grass I struggled to keep her in focus. “That’s because you’re not on the f**king AI Servo!” came the reply from the front seat. Before I could work out what the hell that meant, the cheetah bounded off. Panicking, I pressed the shutter: I had missed the moment. More cursing ensued but I soon composed myself. I was, after all, in the Mara, the most abundant of Africa’s national parks, and I’d be seeing plenty more game.

The curses were from Paul Goldstein, one of the UK’s most respected wildlife photographers, with whom I would be spending a week to learn his trade.  His reputation preceded him, and not just as a lensman: it’s well known that he doesn’t suffer noobs gladly. But when you’re the best in the business and own a handful of luxury camps in Kenya’s Maasai Mara, you can afford to be a little curt.

In his defence, Goldstein is a charmer as well as a martinet. With his strict time-keeping and stentorian voice, he manages his camps as if they were exotic outposts of a 1950s boarding school; the carrot and the stick are both integral to his teaching method. On game drives, when the intensity of the moment takes him, he launches into a tirade of expletives: sometimes directed at an individual, sometimes at a beast, and sometimes at the savannah in general for failing to arrange itself into a picture-perfect composition. But if you follow his guidance and put in the work – which is, after all, what I was here to do – he will regale you with anecdotes and good humour.

We met on the runway in the park’s Mara North conservancy as I disembarked from a rickety twelve-seat plane with broken seatbelts. These were my first steps in Africa, and no amount of David Attenborough re-runs could have prepared me for the half-hour drive to the Kicheche Mara Camp. Giraffes strolled languidly beside the rutted thoroughfare; herds of zebra scattered before us and reconvened in our wake; warthogs trotted past with their tails held erect; birds of all colours flew everywhere. I asked Goldstein whether I could stop to take some photos. His reply: “We’ll find you something interesting to photograph.”

I find myself unable to describe the spectacle of the Maasai Mara, so I’ll borrow four words from Polish photographer/journalist Ryszard Kapuściński: “Light everywhere. Brightness everywhere.” The light is indeed what strikes your eyes first: its brilliance in the morning, its clarity at noon, its warmth in the crepuscular hours. The terrain of grass and acacia trees is a fairly uniform green-brown canvas, but the sun recasts it in a kaleidoscope of golds, ochres, whites and viridians. The light gives the park its shifting, unpredictable character; at night it is a black sea pierced by howls.

Which is where AI Servo, and all the other arcane functions of my Canon SLR, come in. As a trainee photographer, I was essentially here to learn how to capture light. Every morning we left the camp before dawn and drove out to meet the sunrise. In these early hours, when the wildcats played on the cool plains, Goldstein showed me how to manipulate shutter speed and aperture, refocus compositions, take portraits and slow pans. I learned to adjust my camera’s sensitivity to light as the sun rose in the sky. I still got told off, not least for my posture – “You look like an old man having a w**k,” I was told on one occasion – but as my technique improved, his tone softened.

On my fourth day I was put to the test. We had been following a family of cheetahs throughout the morning, and we knew they were hungry. They had halted in the bushes beside a plain of grazing impala, and we were waiting for them to make their move. Goldstein and I whiled away the hours trading quotes from The Fast Show. I was in the middle of a Paul Whitehouse impression when Goldstein leapt to his feet, camera in hand, obscenities in mouth. Mummy cheetah had chased down an impala fawn and pinned it to the ground.

What ensued would have been unbearable to watch except through a lens. The four cubs gathered round, and their mother left them to toy with the shivering fawn for 20 excruciating minutes, tripping its legs and pawing off chunks of flesh. At one desperate point, the fawn hid under our vehicle, vainly hoping to shake off the cats. Eventually, concerned that its bleating would attract hyenas, the mother finished it off with a bite to the jugular. It was grim, but it made for sensational photography. When Paul saw my slideshow he patted me on the back, and I knew the compliment was genuine.

After the heat of the showdown, we retired to the calm of the Kicheche Bush Camp, further south in the Olare Motorogi conservancy. (Tourism in the conservancies, which constitute the northern third of the park, is more regulated than in the reserve, which makes up the rest; here, the Maasai are compensated for the use of their ancestral lands.) Over a lunch of home-baked pizza and mango, the camp’s managers explained that the great wildebeest migration north from the Serengeti was getting underway, and their crossing of the Mara River would make for some great photo ops. For that, we would have to head to the southernmost reaches of the Maasai Mara, where the river marks the border with the Serengeti and Tanzania.

We rose an hour earlier than usual and drove south through the brightening air, waking the guard at the gate to the reserve. As we approached the river, an unearthly buzz rose over the rumble of the engine. It got louder, and I distinguished two pitches: the lowing of animals, and what sounded like the hum of a huge swarm of flies. We parked by the river, and our driver pointed across the water to the Serengeti’s fields beyond. Scattered across them were half a million wildebeest and zebras, pacing and stamping as if in preparation for an Olympic race. The hum belonged not to flies, but to the younger beasts.

Some of the animals had tentatively wandered up to the riverbank, testing the waters for currents and crocodiles. They waited for hours, and so did we. Then, without warning, one wildebeest took the plunge and ran across into the Mara; others followed its example. Before long, the animals were streaming across the shallows like rush hour commuters at the Dartford Crossing. I deployed my full arsenal of zooms and slow pans, doing my utmost to capture the spume and the glittering sun on the water, and as the buzz swelled into a cacophony of grunts and groans I took my best photos of the trip.

• Safarilink (flysafarilink.com / +254 206 000 777) offers twice daily scheduled flights from Nairobi to multiple airstrips in the Maasai Mara from £206 return per person including taxes.

• For more information on visiting Kenya, contact the Kenya Tourism Board on 020 7593 1731 or visit magicalkenya.com