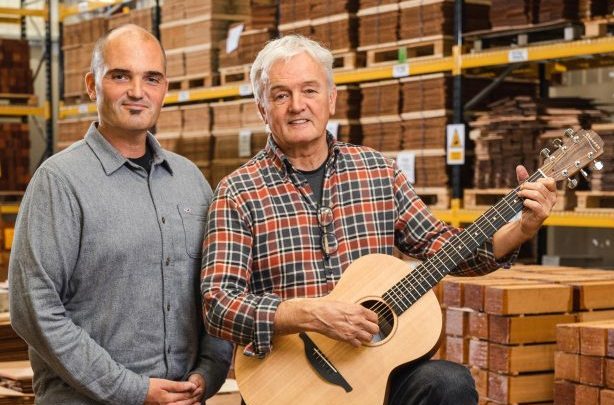 County Down-based guitar maker Lowden Guitars has been honoured with a Queen’s Award for Enterprise for International Trade. Following their recent celebration of 45 years in the business of creating high-quality guitars and the launch of their collaboration with Ed Sheeran on the Sheeran by Lowden brand in early 2019, the outstanding legacy of founder and luthier George Lowden, pictured right with Managing Director David Ausdahl,  and the team of skilled guitar makers has been recognised with this prestigious award.

Learning to manufacture guitars ‘the hard way’ through self-teaching, George’s focus has always been on craftsmanship, quality and experimentation with new shapes and innovations. This dedication to innovation has been an important aspect of the brand’s success and reputation as Lowden grew from one work bench to a sprawling workshop which employs and trains the skilled craftspeople who contribute to Lowden’s reputation for quality.

“It has been a milestone moment for Lowden Guitars to be included by the Prime Minister and Her Majesty the Queen on the list of businesses in this year’s Queen’s Awards for Enterprise,” said George Lowden, Founder, Lowden Guitars, about their recent recognition. “It has taken a lot of hard work, patience and determination during the last 45 years and we are delighted and humbled to be among other home-grown companies and brands on this prestigious list.”

2019 was marked by significant growth and development for Lowden across its export markets in the USA and Europe. Due to high product demand following the launch of Sheeran by Lowden, which saw Lowden produce a new brand of guitars in collaboration with globally-acclaimed singer-songwriter Ed Sheeran – a partnership which evolved naturally off the back of the friendship established between the Lowden family and Sheeran – 2019 also saw Lowden grow its staff numbers and continue to develop its world-renowned guitar range with the addition of eight new models to the brand’s core collection as well as the launch of Lowden Strings and a suite of Lowden-branded guitar care products.

Acknowledging the importance of Sheeran by Lowden’s success in making Lowden a household name, Managing Director David Ausdahl said, “Building on the long-standing reputation of Lowden as an aspirational guitar brand sought out by players around the world of varying backgrounds, launching Sheeran by Lowden has introduced our guitars to a whole new generation of players, encouraging many musicians on-the-rise to dedicate themselves to reaching their highest potential in guitar playing.”

Looking back on this year of significant growth and success for Lowden, David added, “The whole team is pleased to congratulate George Lowden on this truly special commendation which recognises his dedication to continued growth while maintaining the outstanding reputation of the Lowden Guitars brand. The long judging process began last year, and we are delighted to have been notified of our award win.”

The Lowden Guitars team will celebrate its award during a royal reception for Queen’s Awards winners this summer at Buckingham Palace.

For more information on Lowden’s range of premium guitars including Sheeran by Lowden visit lowdenguitars.com and sheeranguitars.com.