No idyll this: Cairo Year One 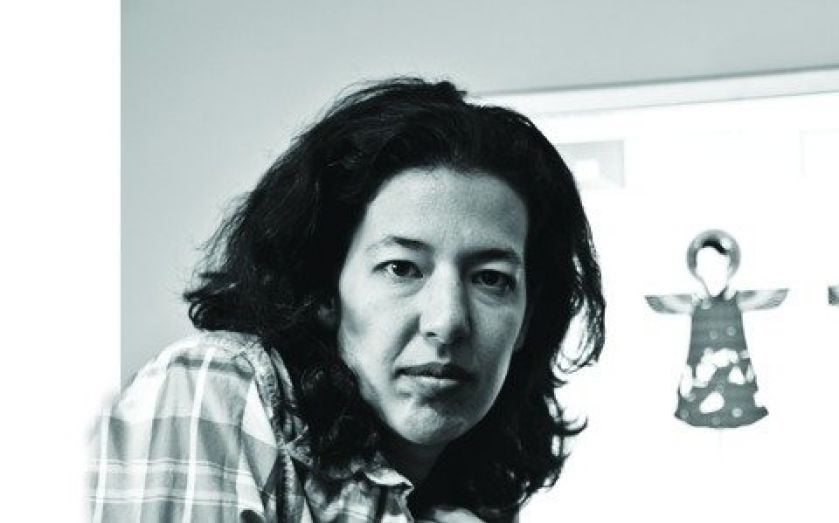 All day every day for a year, Nermine Hammam roved around Tahrir Square and Zamalek in Cairo. Armed only with her Nikon camera, she was snapping the Egyptian revolution – the initial 18-day uprising and its grisly aftermath. With 70,000 pictures to choose from by the close of the year, Hammam had to perform an exquisite edit to even begin this project, now called Cairo Year One. A series of photographs planted in the most unlikely of backgrounds, Alpine postcards and 18th century Japanese silk prints, the series is as conceptually heavyweight as it is technically impressive.There are two sets in Cairo Year One: Upekkha, a Buddhist word for equanimity, and Unfolding. The former shows young policemen and soldiers she photographed (or “shot”, a transgressive use of the word not lost on Hammam) in several poses – at rest, looking playful, averting their eyes. They have been cut out and placed on postcards (Hammam collects them) – mostly European landscapes. The trick here is twofold: she has softened these supposedly macho heroes, making them almost effeminate, and she has projected a motherly instinct to protect, placing them wishfully into idyllic surrounds. In Unfolding, gorgeous scenes of cherry blossoms, trees and exotic birds obscure violent and shocking imagery. To see the brutality – taken from news images Hammam found online – you must peer hard through branches and beaks and flowers, and use your brain. This, as Hammam points out, is quite different to the usual way we absorb grisly news images – with unthinking habit and lack of focus, usually while we’re doing something else.I meet Hammam at the Mosaic Rooms, an Arab culture centre in Earl’s Court, where the exhibit is on show. Very tall, she has wild hair, sports cool specs and moves with athletic grace. With her jeans, white t-shirt and super-casual checked shirt, she presents an obvious contrast – attire-wise – to what Egypt’s ruling Muslim Brotherhood expects of its female population. Despite long stints as a student in England and at the super-prestigious Tisch School for Arts at New York University, she lives and works in her hometown of Cairo and plans to remain there – “my friends, the ones I’ve known since we were little” and family keep her there.Hammam is both political and desirous not to be seen as so. “I’m not a politician” is something she says numerous times when I ask about her views on what she photographed: the behaviour of the government and its emissaries, and on cultural pressures, such as the veil.“My work is about people, media, human beings,” she says. That’s not to say her work is neutral. She is annoyed – albeit more creatively than most – about the branding and storytelling that goes on in the portrayal of war and brutality. “After two weeks, the revolution was called the ‘Arab Spring’. What is this bullsh**t? Everything is branded so quickly.”The use of the bucolic Alpine andseemingly “Zen” Japanese backdrops is Hammam’s way of questioning “how we see power” – which is, really, her central interest. “Power is created through imagery, how you depict its heroes. So I chose to show the youth and innocence of many Egyptian soldiers. These are antiheroes. It is also an antiwar message: I’m asking with these photos: ‘do you really want to send these boys to war?’”So pretty and intricate, it seems strange that these works would excite controversy – yet certain viewers in London took umbrage with their portrayal of the Egyptian military, and Hammam has decided not to show them in Cairo because the reaction would be “a gamble”. Perhaps the reason for their contentiousness is precisely their subtlety and beauty. Namely: below surfaces, however bucolic and pretty, or macho and militaristic, something lurks – that could be innocence, or it could be bloodshed and corruption. “Once you strip it down, you realise that behind all this storytelling and creation of reality there is something else.” And it’s this “what lurks beneath” idea that pierces to the heart of every institution, society and even to the business of life itself.Cairo Year One is at the Mosaic Rooms, Earl’s Court, until 24 August.