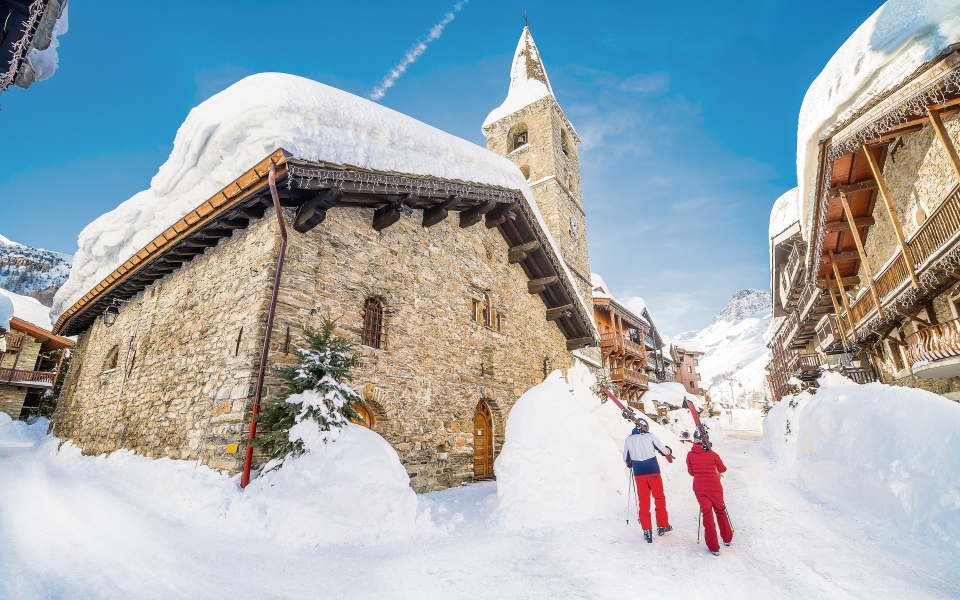 The venue is Cocorico, a packed Val d’Isere après ski bar where the music is pumping. BBC Ski Sunday presenter and five times Olympic skier Graham Bell is regaling us of the time he broke the Guinness World Record for the fastest towed speed on skis. Dragged by a Jaguar XF Sportbrake in Sweden, he reached an eye watering 117.48 mph, just shy of his top downhill speed of 121mph.

“It felt equally dangerous to racing downhill and as scary as racing the Streif,” he says, referring to Kitzbuhel’s notoriously difficult downhill course. “Actually, it was a bit scarier.”

Bumping into the Ski Sunday film crew in a bar was just one of the many surprises my short ski break to Val d’Isere had to offer. The resort has been dubbed Magaluf on Ice, and has everything a party animal could ask for. Lunch at La Folie Douce, the après-ski venue above La Daille, had already set the pace and at 1pm the venue was in full party mode, the music blasting out as a DJ egged on the crowds who danced outside on tables in ski gear. Heavy snowstorms and whiteouts that day meant conditions were far better for drinking than skiing, although the snowfall guaranteed superb skiing for the rest of the week even though it was still early December.

In the heart of Val d’Isere the resort is undergoing a £170m transformation to be called Le Coin de Val. For those who know the village, this five year development will affect a huge triangular chunk of the centre bordered by Dick’s Tea Bar and a 250-yard section of the main road, the Avenue Olympique. The project will include an extension of the piste towards the main road and an underground moving walkway all the way back up to the ski lifts. Two new hotels, apartment blocks and 100 private chalets will in total provide the resort with 900 extra beds. It will be the largest construction project in the French Alps for the last 20 years – bigger even than the construction of Arc 1950 in nearby Les Arcs.

The investment makes sense. Val d’Isère already offers miles of popular slopes and trendy après ski, which is why its 1,600 year-round population swells to 25,000 in peak winter weeks, with half of those visitors arriving from the UK.

Also new is Le Refuge de Solaise, France’s highest hotel, on the mountainside way above Val d’Isere. At a heady altitude of 2,551m, it boasts 34 rooms, three large luxury apartments, and a traditional refuge dormitory with 14 beds. Facilities include a 300-cover gourmet restaurant, a cocktail bar, and a seminar and projection room as well as a children’s play area and a spa with a 23-metre pool that’s open to the public. The hotel has truly spectacular 360-degree mountain views too.

For me though, the great attraction of  skiing in Espace Killy (the connected resorts of Tignes and Val d’Isere) is the two-for-one option, which is especially useful in bad weather. These twinned resorts are connected by 300 kilometres of fantastic skiable terrain in the area. This includes high alpine, gladed trees and two glaciers. More than 150 ski runs and 1,900 metres of vertical descents with varying difficulties to explore mean it’s an area you’ll keep coming back to winter after winter.

Our VIP Ski chalet, Club Aspen also reflects the high standard of accommodation the resort offers. The high-end chalet, with en-suite bedrooms, is actually a super luxury oversize apartment in a timbered block in the main street, a short walk from the main lifts. The chalet itself doesn’t disappoint and has a selection of lounges plus a dining room, as well as hot tubs, a games lounge and bar with pool and giant TV, and plenty of balconies with views of the mountains or the village centre.

Some chalets now incorporate all the luxury of a five-star hotel with the added bonus of chilled-out informality and the chance to mingle with fellow guests from the moment you arrive, making it ideal for solo skiers looking to find company on the slopes. A flexible menu plan offers a choice of gourmet dishes from a highly acclaimed chef.

Sitting down for dinner is a great chance to meet like-minded snow enthusiasts – and there’s a lot of good things to digest, not just in the chalet, but in the Espace Killy ski area in general.