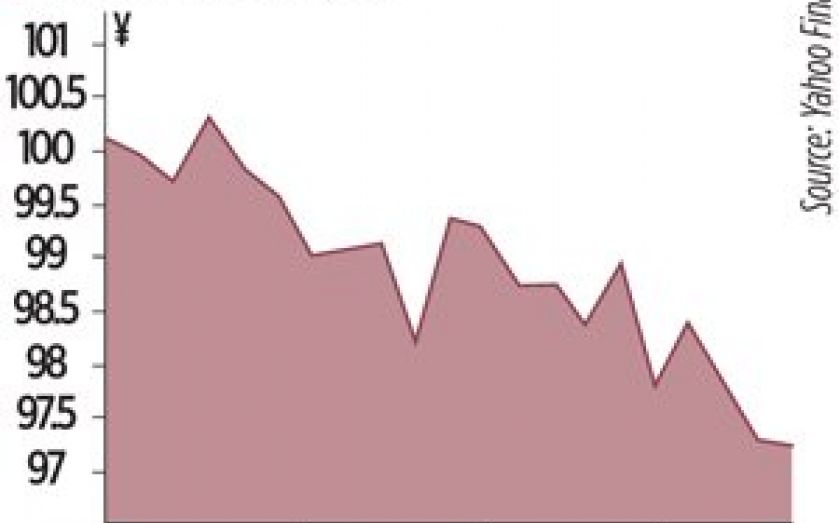 AS THE US shutdown continues, with Republicans and Democrats also looking less likely to agree on raising the debt ceiling, markets are becoming increasingly jittery.

The cost of insuring €10m (£8.45m) of one-year US Treasuries against default shot up to €53,750 on Friday, compared to €5,126 just two weeks ago. The dollar, meanwhile, has weakened against perceived safer currencies. Dollar-yen fell from over ¥98.50 at the beginning of October to around ¥96.80 yesterday. With both sides standing firm, analysts expect the deadlock, and its attendant market volatility, to continue well into next week.

“Our baseline scenario is that volatility in financial markets will force politicians into an agreement either next week or the week after,” says Nomura’s Yujiro Goto. This volatility is likely to consist of further falls of the dollar against the yen and the Swiss franc. But Goto also sees euro-dollar moving from yesterday’s level of below $1.36. “It could test the $1.38 mark.”

Beyond the weakening of the dollar, James Butterfill of Coutts sees a continuation of the shutdown and uncertainty over the debt ceiling hurting cyclical stocks. “We could see a general risk-off scenario as we get closer to the debt ceiling limit,” he says. Nick Lewis of Capital Spreads, meanwhile, says that the level of uncertainty is leading investors to sell until an agreement is reached. “We just don’t know how far markets will fall,” he says.

But long-term equity investors may see any blips as a buying opportunity. “If a strong agreement is reached on both the budget and the debt ceiling, any falls are likely to be temporary,” says Butterfill. The sustainability of any agreement is crucial here, with a stopgap deal (temporarily reopening the government or suspending the debt limit, for example) unlikely to end the uncertainty.

Rabobank analysts, in a recent note, said that such a temporary solution would “act as a continuing impediment to US corporates putting cash to work in the form of investment.” Indeed, “the dollar may also weaken even further if the agreement is seen as just kicking the can down the road,” says Goto.