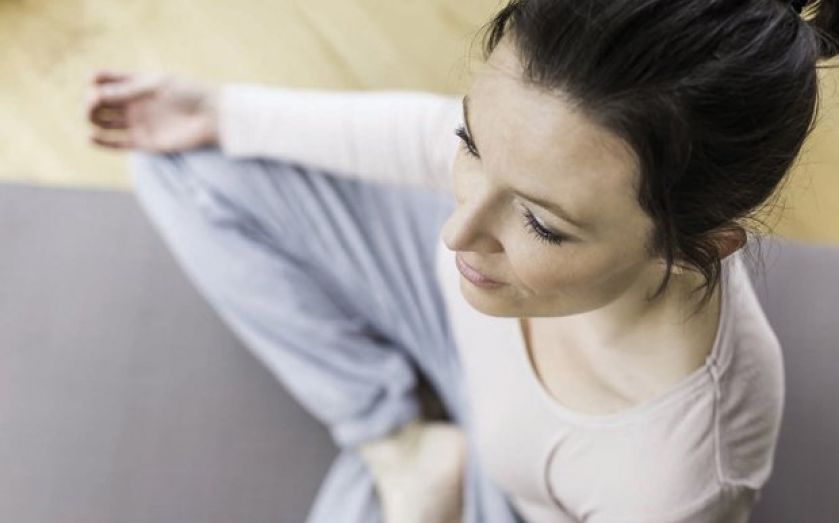 The new obsession with meditation is a sign of exactly how mindless our places of work have become.
Imagine leaving the office on a cold winter evening. You are tired, stressed and all you want to do is stretch out on the couch, drink a large glass of wine and laugh at D-list celebrities doing tasks that clearly exceed their skill sets.
But as you hurry out of the building, you notice a gathering of your colleagues in a side room. This would not normally surprise you if they were sitting around a meeting table with looks of excruciating boredom on their faces. However, this scene is altogether more shocking.
Your dull colleagues, still wearing their grey suits, are sitting cross-legged on the floor, listening to the sounds of dolphins, whales and a host of other marine mammals through a CD player at the front of the room. A senior suit sits in the middle of the circle, instructing those around him to “breathe”. What are these people doing? After checking the sign on the door, you find the answer – they’re taking a mindfulness course.

Mindfulness – a meditative technique focused on “being aware of the present moment” – is one of the latest wellbeing fashions to grace the hallways of our companies. Google, for example, has reportedly hired a Buddhist-style teacher, Chade-Meng Tan, and given him the title of “jolly good fellow”. The most popular course at the Googleplex is Search Inside Yourself – a short course on mindful meditation.
Not to be left behind, a number of government departments in the UK have started to offer mindfulness courses. For instance, the NHS gives stressed out carers mindfulness training. Perhaps the most bizarre example of this trend at work is the US Marine Corps Mind Fitness Training scheme. This programme puts battle-ready recruits through a series of meditation exercises, and then drops them into a fake Afghan village, complete with manically screaming actors and controlled explosions.

While mindfulness training might seem like nothing more than a New Age indulgence to some, for others it can be serious business. There is now mounting scientific evidence showing that putting people through an eight-week programme of mindfulness training is likely to help reduce depression, anxiety and stress. It’s also claimed that mindfulness helps people manage any chronic pains they might have.
Similar results have been found in the corporate world. After training, stressed out executives report being able to focus their attention for longer, increase their short-term memory spans, and stop themselves from reacting to situations in inappropriate ways. It even helps some executives to sleep better.

These impressive individual success stories have led some to suggest that we could make our organisations fundamentally better and more effective by compelling employees to become more “mindful”. Some mindfulness pundits (yes, there is such a thing) hope that, through company-wide mindfulness training, businesses could one day be made up of perfectly focused and completely conscious individuals, who don’t harbour petty grudges or make irrational decisions in an instant. This might sound like an attractive proposition. But the reality in most organisations is, of course, quite different.

At the same time as interest in mindfulness has reached fever pitch, most companies are becoming increasingly mindless. Let me explain. Businesses these days tend to create exactly the right environment for stopping people from focusing, from being able to calmly think through issues, from recognising the needs of their body and so on.
Companies bombard employees with emails, social media messages, and other pieces of information. This causes attention spans to become fragmented, spanning multiple tasks at once. If we’re not spending our time juggling emails, we’re in pointless meetings. The result is that no one pays attention.
Instead, people spend their time sending more emails in order to organise yet another round of futile meetings. Staff are routinely encouraged to multi-task, and take on tasks that they have little or no suitable experience for. This means that employees are rarely given the scope to develop a deep expertise in a particular area.
Companies also ritually move people around through rounds of restructuring and reorganisations, often with little or no real gain in terms of effectiveness or efficiency. This makes people feel insecure and unable to focus on their jobs. To top it all off, employees are then squeezed into open-plan offices.
The hope is that these offices will encourage knowledge exchange and creativity. The reality is often the opposite: people become agitated and turn inwards. These kinds of mindless work environments make it impossible for people to focus for more than a few minutes at a time. They can become anxious, image-obsessed and hyper-active in their urge to create “solutions” – often for problems that don’t exist.

With all these factors making our offices such mindless places to work, perhaps it should come as no surprise that employees are grasping after mindfulness techniques. Individual meditation certainly can help – it is a relatively cheap and fairly easy solution that does not require fundamental changes to organisations. In some contexts, a little mindfulness can be a great help. But in many of our businesses, just introducing mindfulness courses is like putting a plaster over a shotgun wound.
If businesses are truly interested in fostering a different working attitude among their staff, they would do well to make workplaces a little less mindless in the first place.
Andre Spicer is co-author, with Carl Cederstrom, of The Wellness Syndrome, which will be published by Polity in January. He is also professor of organisational behaviour at Cass Business School.

Legend has it that the Buddha sat under a Bodhi tree in India for 49 days straight before achieving enlightenment. Some Mindfulness-Based Stress Reduction (MBSR) programmes today pledge to get you close after just a dozen or so sessions.
In its current form, mindfulness owes its existence largely to Dr Jon Kabat-Zinn, who earned his PhD in molecular biology from MIT in 1971, according to his website. He began fusing secularised, Buddhist-influenced meditative techniques with contemporary medical practices to help patients with chronic pain in the 1970s, and the idea has gone global since.
The method is often summed up as the quest to pay “attention to purpose, moment by moment, without judging”, which is apparently achieved by focusing on your breathing, to take one example. Get it right and the mind becomes empty of critical thoughts and other sources of stress. A study by researchers at Johns Hopkins University released earlier this year found that focusing your mind in this way can produce measureable improvements in the symptoms of stress, depression and anxiety.
But not everyone’s convinced, and some instructors are better value for money than others. So be mindful when splashing out on a £30 starter CD.