With the US government still in shutdown (well, more of a slimdown, around 80 per cent of federal employees are still at work), we're probably not going to see nonfarm payroll (NFP) estimates this Friday.

Markets are so hungry for jobs data because Federal Reserve decision making over when to begin scaling back asset purchases (known as tapering) rely on labour market figures. The Fed have a 6.5 per cent unemployment target.

That means that market watchers will refocus their attention on what they have – September's ADP report (out at 1.15pm today). Societe Generale have plotted past ADP and NFP data: 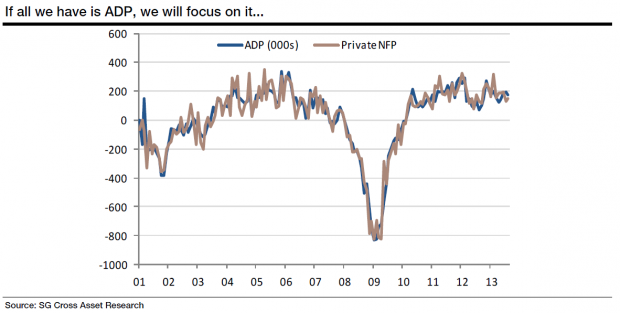 Societe Generale's Kit Juckes says that the NFP jobs number raffle "may as well be replaced" by an ADP one. Juckes says that while ADP and NFP are close, that's not quite fair – the ADP number has "been smoothed by subsequent revisions and ADP figure isn't a good guide of the monthly jobs number".

That said, Juckes thinks that "ADP does a decent job of telling us about trends in the private sector jobs market", and Societe Genrale's Brian Jones thinks the jobs gain could be as much as 235,000 this September (consensus estimates indicate an increase of just 180,000).