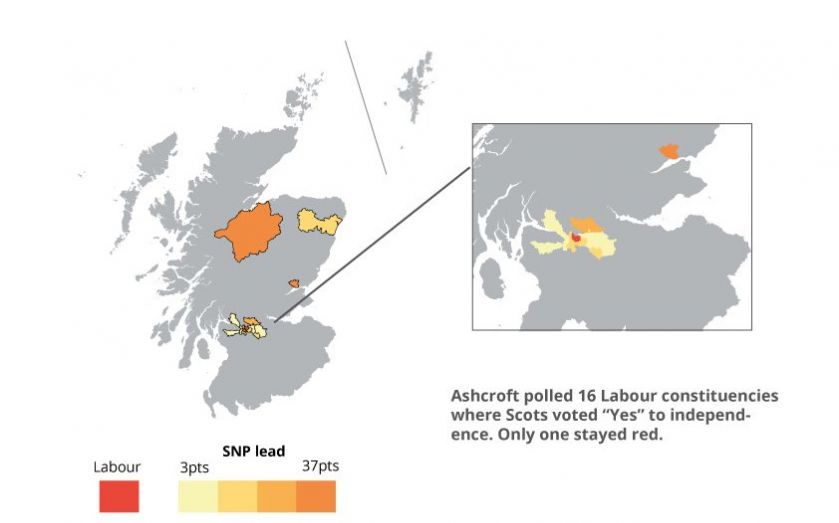 Lord Ashcroft's long-awaited polls of the Scottish constituencies are finally in and they make grim reading for the Labour party.

According to Ashcroft's research, the SNP is ahead in 13 out of 14 Labour-held seats. Some of these seats are not marginals but are held with huge Labour majorities.

The seats that received the most attention were those where Labour won handsomely at the General Election but the SNP carried in the independence referendum. The analysis included all of the Glasgow seats.

If Ashcroft's poll is reflected on election day the SNP would claim some prominent Labour scalps. One of which would be the shadow foreign secretary and Labour's General Election campaign chairman Douglas Alexander.

In total the polling covers 16 seats, with the SNP ahead in 15. In Labour-held seats the swing to the Nicola Stugeon's party ranged from 21 per cent to 27 per cent.

The most recent Ipsos Mori poll gave Nicola Sturgeon's party a huge 28-point lead over the Labour party. A YouGov poll for the Times yesterday suggests the SNP will pick up 30 seats in May. With Labour and the Tories polling neck and neck, Ed Miliband will be concerned to see his party's heartlands falling to another left-of-centre party.

Labour has 41 MPs in Scotland and significant losses north of the border could tip the General Election result in the Tories' favour. Labour's leader in Scotland Jim Murphy has yet to make major impact with the electorate.

Neither Murphy's pledge of 1,000 nurses for Scotland funded by a mansion tax or a message of vote "vote Sturgeon get Cameron" is cutting it with Scots.

The SNP have drawn attention to Murphy's Blairite roots hoping an MP seen as being on the right of the Labour party will prove an unattractive prospect compared to Sturgeon's social democratic credentials.

Lord Ashcroft's analysis isn't the only one to show Labour performing poorly in its Scottish heartlands. Professor Richard Rose of Strathclyde University is predicting the number of SNP MPs who will return to Westminster will soar from six to 45.

If Rose is correct, SNP gains could hand David Cameron the election. Rose's forecast is for a hung parliament with the Conservatives as the largest party.