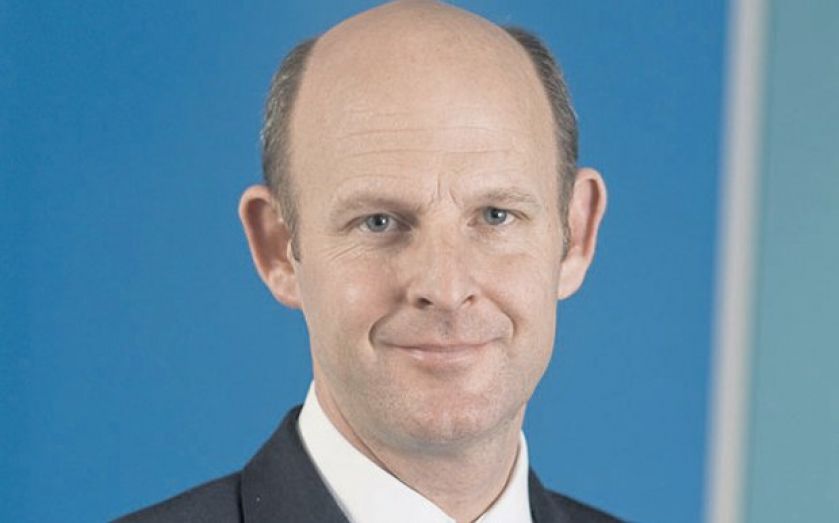 Inmarsat boss Rupert Pearce explains the firm’s mission.
Walking past Inmarsat’s imposing head office on Old Street roundabout is probably the closest the average Londoner will ever come to travelling through space.
Inmarsat oversees 11 satellites in orbit. The 35-year-old company is light years ahead of the government’s proposal, unveiled last week, to establish a spaceport in Britain some time in 2018.
The “flying room” at Inmarsat’s headquarters had just two men tracking the six-tonne vessels when City A.M. visited, with both quietly concentrating on screens filled with flickering data cells.
Next door is Inmarsat’s vast data wall, with hexagons plotted across a world map flashing when a user taps into a satellite’s service. Some regions are fixed in blue, warning engineers not to interfere with the signal: Brazil during the World Cup; Ukraine, where political unrest makes satellite calls particularly important; and the ocean around Perth, where the search for Flight MH370 continues.
Inmarsat became a major part of the hunt for the Malaysia Airlines plane in March, when one of its satellites picked up an empty “ping” signal from the plane’s interaction with a ground station, helping dramatically narrow the search area.
For a company that typically deals in government and maritime communications, becoming the focus of public attention, with thousands of phone calls a day asking for information, came as a shock.
“There was a huge media interest in this extraordinary story about a Boeing 777 just disappearing almost completely off the radar screen, literally. And we were very conscious that we weren’t the story, and we should never be the story,” says chief executive Rupert Pearce, looking back at Inmarsat’s involvement in the search.
The FTSE 250 company has offered to track all commercial flights for free, in the hope that these types of tragedies can be avoided. It also sells a more sophisticated “black box in the cloud” service, enabling airlines to pull data from an aircraft, or even access cockpit cameras, as soon as it veers off course or otherwise acts unusually.
“I think airlines are finding that their customers are saying, ‘How can this happen? How can you guarantee that your aircraft will be tracked?’” says Pearce, adding that around 11,000 planes already carry some sort of Inmarsat equipment.
Inmarsat, formed by the International Maritime Organization in the 1970s and privatised in the 1990s, has long played a part in aviation safety. Pearce aims to broaden the firm into a more everyday side of air travel, by linking commercial planes across Europe to its broadband internet connection via a new Europasat satellite in 2016.
British Airways has agreed in principle to be its first customer, and the firm is in talks with around half a dozen others. It’s been five or six years in the making, since Europe passed laws enabling terrestrial and satellite networks to work in tandem, and follows the advent of in-air Wi-Fi in the US.
Pearce is slightly apprehensive about introducing endless phone calls to the skies. “Obviously as a human being, the answer is to a degree,” he says. “I think the utility of being able to be connected massively outweighs the down-side.”
Another big project on Pearce’s desk is Global Xpress, its first new satellites in five years, which will offer 50 megabit-per-second broadband for everything from steering drone ships across oceans to tweeting in the Sahara.
The first Global Xpress satellite was fired into space in December, and two more are edging their way towards launch, which Pearce says is “a huge relief” after three years of planning.
Inmarsat has spent $2bn (£1.17bn) in four years on capital-intensive projects, and while the firm has also increased its dividend eight years in a row, Pearce said that in the past it has been tough to explain the company’s mission.
“Inmarsat listed in 2005 and I remember at the time it was a big challenge to explain how the satellite world works, how we grow, and what our business model is. But I think since then, Inmarsat has grown and diversified and we’ve carried with us a story that’s matured as we’ve gone.”
The company has also had some hair-raising moments on shareholder votes in recent years, though this May’s annual shareholder meeting saw all resolutions passed comfortably. Andy Sukawaty, the firm’s executive chairman, is due to step back into a non-exec role by the end of the year following a three-year handover of power to Pearce, who joined in 2005 as the firm’s legal counsel.
“I think come what may, some shareholders will not have wanted to see that kind of evolution, and some might have supported it but felt voting in favour of it for corporate governance reasons would have created a precedent that they didn’t want to create.”
Pearce is otherwise complimentary about London’s support for the firm, and the government’s efforts to encourage aerospace companies in Britain. He has been keeping tabs on another British space company, Virgin Galactic, as it works to launch commercial space flights – not least because the firm’s operations chief lives next door to him. However, Pearce adds that he’s “not yet” used his connections to get a ticket on the first flight.
Still, he’s closer than most of us will ever get to reaching space.