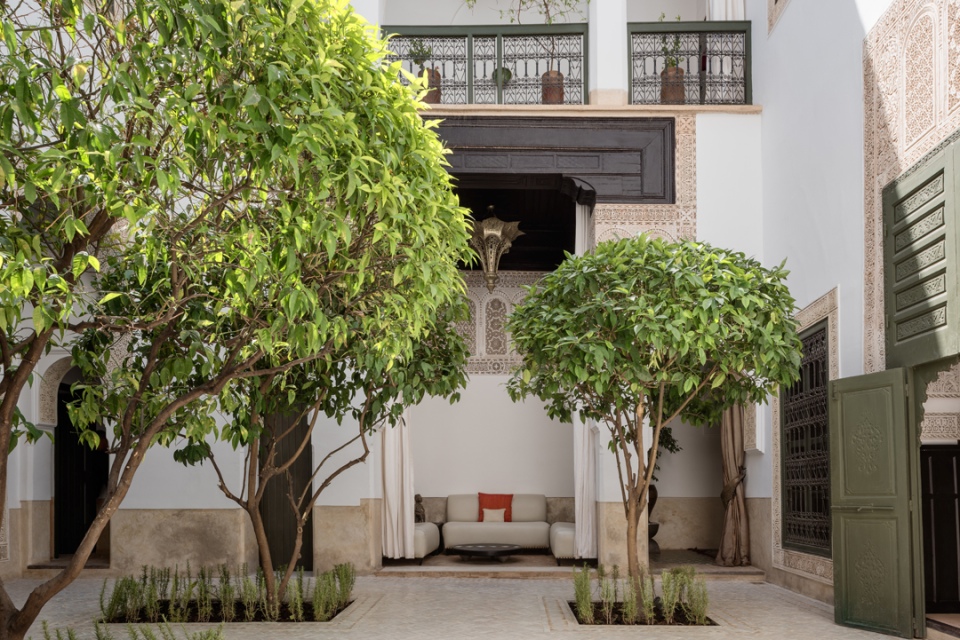 Personal space? In the souk, there’s no such thing. Belts. Bags. Trinkets. Shoes. Earthenware. Snakes. All will be thrust under your nose within minutes of entering the old town. Mules kick up clouds of nose-tickling dust. Scooters slalom recklessly through the throng. All around, commerce unfolds as it has done for centuries: aggressive, loud, and, once you get into the spirit, fun.

Away from the medina’s commercial thoroughfares a quieter industry thrives. Marrakech is home to around 1,500 riads, each offering reprieve from the dust and noise of the medina. Set back from the narrow streets, they offer cool and quiet, and have, for decades, been frequented by arty Westerners. In the 1960s, leading lights of the cultural revolution came to bliss out on rooftops. Yves Saint Laurent swanned through the medina with Andy Warhol, Betty Catroux and countless other icons of bohemia. Now a museum bears the French designer’s name, and tourists can shelter from the beating sun while browsing displays of his classic silhouettes.

Riads come in all shapes and sizes, from rough and ready courtyards offering little more than sweet tea and silence, to luxe boutiques with 5 star frills. Le Farnatchi is toward the latter end of that spectrum. To step into its renovated 300-year-old courtyard is to banish the bustle of the medina and embrace calm. I arrived on a sticky April day, the porter ushering me to a table bearing mint tea and fruit. I was first struck by the colour – vibrant turquoise tiles set against neutral stone – and then the sound: the soft echo of water trickling into the central pool; enough to soothe the most hardened haggler.

Farnatchi opened as a five room boutique riad in 2004 and has since expanded to 10 lantern-lit suites, each uniquely and opulently accessorised with antiques and fine fabrics. Enormous four poster beds and Egyptian cotton make for deep, peaceful sleeps (until the call to prayer – light sleepers will appreciate the ear plugs provided). Intricately carved woodwork adds character to comfort. Our suite had a balcony overlooking the central pool, a lovely and miraculously private spot for breakfast. This is one of the riad’s greatest achievements: maintaining a sense of privacy and expansiveness in what is quite a small space spread across two elegant courtyards. It was near full when we stayed, and though many rooms overlook the same space, we barely registered another guest.

It is harder than you might think to eat well in Marrakech. Thankfully, one of Marrakech’s better restaurants is contained within Farnatchi itself: on a rooftop across the road from the courtyard, Le Trou au Mur serves an inventive blend of European and Moroccan fare, including many hard-to-come-by traditional dishes not found in the medina’s many touristy eateries. The chefs here are proud of their traditional mechoui oven, and with good reason: the lamb I had was delicious, by turns smoky and tender. The roof of Le Trou au Mur is also a great spot to watch the sunset: pisé, the reddish pink clay that makes up much of the structure of the medina, looks spectacular in the evening light.

Such is the comfort of Farnatchi, it can be tempting to remain within its luxurious clutches, but there is much excitement within walking distance. On my second evening, I walked five minutes to a lively restaurant, Le Foundouk, where I ate over-sweet tagines and drunk cocktails with an enthusiastic group of Europeans and Moroccans. Iffy food was made up for by the drinks, which were delicious, reasonably priced and theatrically presented.

Our search for a late drink led us to La Salama, a colonial style bar spread across three floors just off Djemaa el Fna, the Medina’s central square. Overflowing with plants, and decorated in chintzy oriental kitsch, the vibe is unlike anywhere else in the city. It’s a great place to people watch, though perhaps wise to go easy on the drinks, given they’re around three times the price of other bars in the medina. Extortionate prices contribute to the sense of colonial decadence.

On my last day, after another balcony breakfast of pastilla (traditional pastry with pigeon, cinnamon and almonds) and fresh fruit, I hit the spa. I had a “tonic – nectarome”, which promised to restore my body’s “natural balance”. It did, though not for long: I couldn’t resist another frantic trip to the souk before the airport. I’m not too bothered though. After all, it gives me an excuse to come back.

A 3 night stay in a hotel suite inclusive of breakfast, a 1hr spa treatment at the Farnatchi Spa and a 3 course dinner at Le Farnatchi is from £480pp based on two people sharing until 31st May 2020 or from £445pp in June and July. Visit lefarnatchi.com. For more info on Le Trou au Mur visit letrouaumur.com