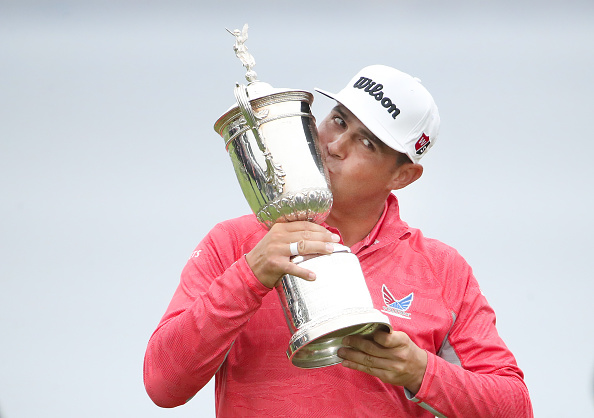 It took Gary Woodland a while to make his mark at the highest level, winning just twice in his first nine years on the PGA Tour and failing to make the top 10 in 27 Major appearances.

But his fortunes have improved in the last 18 months. Last year’s Phoenix Open ended a five-year spell without a title in which he also had to overcome personal tragedy, and he followed that with a share of sixth at the US PGA Championship.

Now, 12 years on from turning professional, the 35-year-old is a Major winner, having claimed the US Open in authoritive fashion at Pebble Beach on Sunday. It’s quite a turnaround.

Read more: Why McIlroy is right to focus on the PGA Tour

Woodland had to fight off opponents of the highest quality to break his Major duck, and they don’t come much tougher than his fellow American Brooks Koepka.

The defending champion underlined his status as the man to fear on the biggest occasions by emerging from the chasing pack with four birdies in the first five holes of his final round.

Woodland had previously failed to convert seven overnight leads into wins but here he refused to be hauled in, making birdies at the second and third to stay in front of Koepka and Justin Rose.

Koepka, winner of four of his previous eight Majors, got to within one with a birdie at 11. But Woodland re-established a two-shot cushion after a booming second shot at 14 and then, under huge pressure, pitched a wonderful second shot onto the downslope at 17. He added further sheen to his breakthrough triumph by draining a 30-foot birdie putt at the 18th.

I’ve written before that Woodland has a great swing and a similar swagger to Dustin Johnson. Both are supremely powerful hitters and exemplify the athletic modern golfer.

Woodland’s improvement has coincided with an upturn in his short game, however, which he credits to his coach Pete Cowen. He didn’t three-putt all week at Pebble Beach, was second in strokes gained: putting, and his four bogeys in 72 holes was a record low for the US Open.

It was also fitting that his biggest win came on Father’s Day. Woodland became a dad in 2017 but son Jaxson spent his first six weeks in intensive care after the miscarriage of his twin caused complications.

Happiness at home can have a huge bearing on a player’s performance and Woodland’s have got better since his family’s health settled down.

Rose looked poised to challenge for a second US Open crown when he began the day one behind Woodland and then birdied the first to join the top of the leaderboard.

It just didn’t happen for the Englishman after that – his 74 left him in a four-way share of third – but he will take the positives from yet another strong Major showing.

Rory McIlroy arrived at Pebble Beach with high hopes and was still in contention on Sunday morning, but two double bogeys proved costly and he wasn’t able to keep pace.

This was Woodland’s day, though, and who knows where it could lead? He has now been top 10 in his last three Majors and has all the attributes needed to prove that this was not a one-off.

Of the other Europeans, Jon Rahm finished strongly with a 68 to share third place on seven under par. The big Spaniard has now been top five at three of the four Majors.

Joining Molinari in a share of 16th was 2010 champion Graeme McDowell, who warmed up for next month’s Open at his native Portrush by recording his best Major finish for five years.

Lastly, well done to Norwegian rising star Viktor Hovland, who followed up winning the prestigious US Amateur last year and being low amateur at the Masters two months ago by repeating that feat here. Still only 21, he is certainly one to watch.