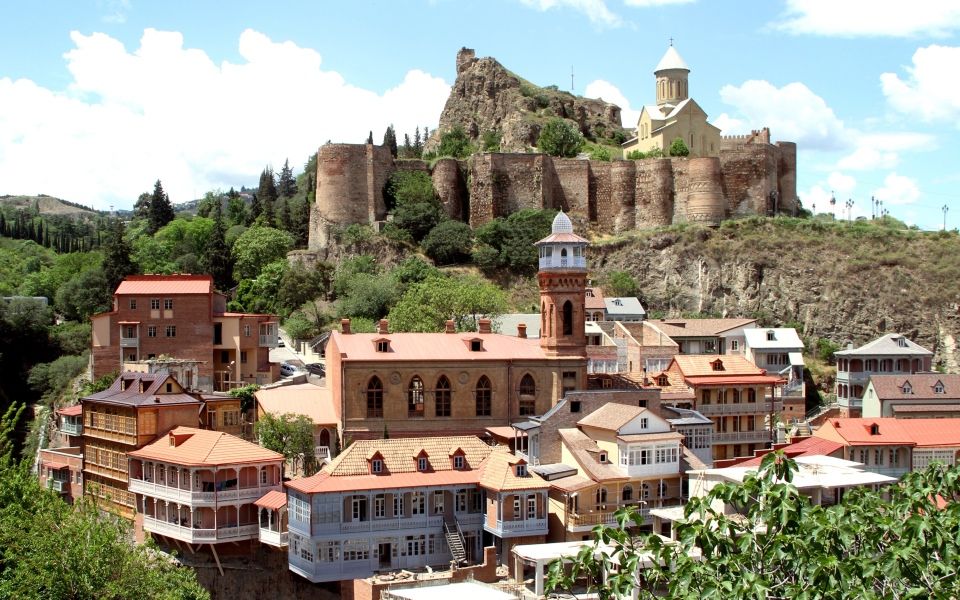 It has been said that Georgians ‘think with European minds and feel with Asian hearts’. Their nation, clamped between Russia and Turkey, is neither fully European nor Asian but rather in a category all of its own. If one symbol encapsulates the Georgian psyche it is the Kartlis Deda “Mother of Georgia” statue, which towers above the hills of Tbilisi. Holding a sword in one hand and a bottle of wine in the other, she symbolises the Georgian readiness to fight for liberty while welcoming friends with a stiff drink.

Such a defiant spirit and love of life has ensured that this beautiful country – which invented viticulture, converted to Christianity earlier than most, and speaks a language unlike any other – has maintained its distinctive identity despite conquests by Persians, Ottomans and Russians. After decades of Soviet rule followed by civil war, Georgia is finally settling into democracy and is a perfect destination for visitors wanting to beat the eastward march of European mass tourism, especially now that it is now reachable via low-cost flights from London.

I began my road trip in Kutaisi, Georgia’s second largest city, in the western Imereti region. Founded more than 3,000 years ago, Kutaisi is thought to be the setting of the Greek legend of the Golden Fleece and is home to some fine medieval monasteries. Gelati is the most fabulous example. Constructed in 1106 on a hill overlooking Kutaisi, this UNESCO World Heritage site was one of the first Christian orthodox monasteries in Georgia. The interior is gorgeous: high vaulted ceilings, murals and frescoes influenced by Byzantine gold aestheticism. King David IV (who is buried here) built this masterpiece of the Georgian Golden Age and transformed it into a magnet for celebrated scientists, theologians and philosophers whose manuscripts still survive here.

Gelati’s hilltop setting is sublime, too: as you sit in the meadows scattered with yellow daisies, the view of the snow-capped Caucasus Mountains and the feel of the breeze against your skin makes for a spiritual experience in itself. 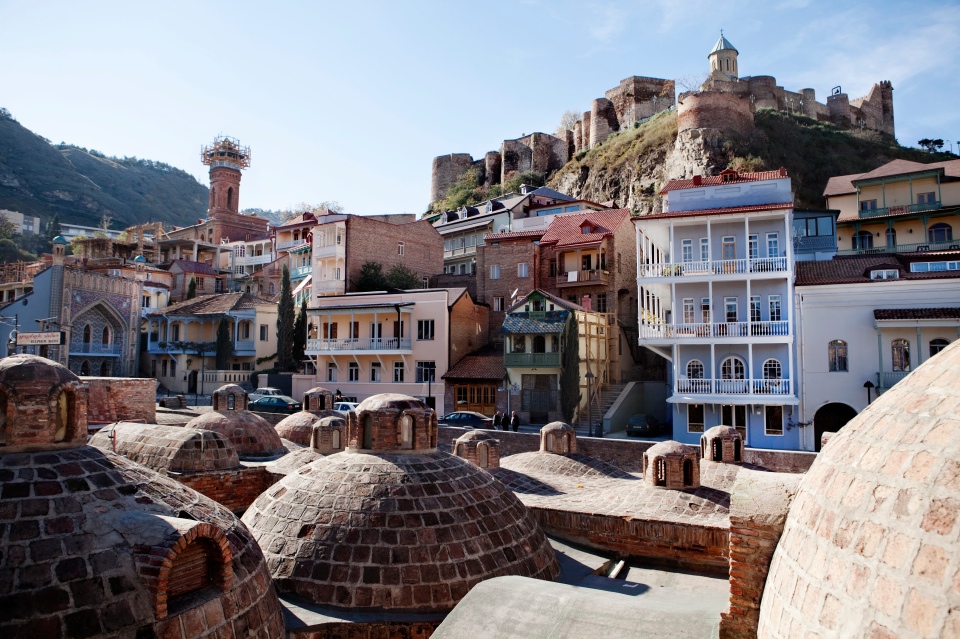 Lunch was at Sormoni, a homely, rustic restaurant whose talented chef was quietly determined to feed us to death. Among other Georgian classics, she laid down khachapuri, a cheese bread, and chvishtari cornbread accompanied by slabs of delicious sulguni cheese (similar to mozzarella). We chowed down pieces of duckling in a tangy sauce, and jonjoli, pickled sprouts, not to mention trout, potatoes and tomato-cucumber salad with crushed walnuts. Just as I had finished my chicken soup, a plate of pork was plonked down in front of me. I thought it was all over when we transferred to the sunshine and flowers to sip tea sourced from local fruits, only for the chef to emerge with a gut-busting encore of mushroom-stuffed cheese.

The next day we drove eastwards, through countryside that was impossibly green. Unmanicured grass carpets the sweeping valleys, cows graze on the roadside, and sparkling rivers cut a swathe through abundant foliage.

We reached Gori, a small town that looms large in Georgian history on account of it being the birthplace of Josef Stalin, the former Soviet dictator. Few Georgians have anything good to say about the man, but here in Gori he is revered by some, if perhaps only for commercial reasons. A photo of his face decorates a window next to a For Rent sign. An old man sells memorabilia close to the modest house where Stalin was born and lived until age four. Access to the house’s interior is forbidden but visitors can step inside the train wagon Stalin once used as personal transport. More of the ex-leader’s personal effects are displayed in the nearby Stalin Museum. 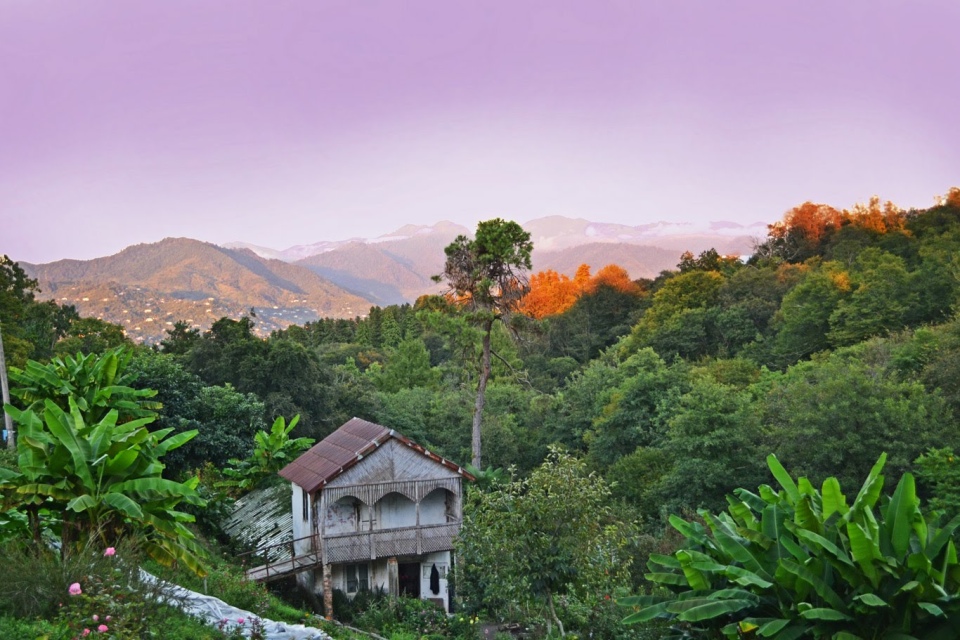 Not far from Gori is Uplistsikhe, an impressive ancient cave town reminiscent of Capadoccia in Turkey. Inhabited from the early Iron Age until the Mongol invasion of the 14th century, Uplistsikhe was built by pagans fleeing invaders. Like all Georgian heritage sites, the location is beautiful, high up on a hill overlooking the Mtkvari River. Uplistsikhe’s inhabitants carved out dwellings from the limestone and evidently made themselves comfortable: remnants of a royal reception area, a pharmacy and even an antique theatre are visible. Foreign aesthetic and religious influences are visible in features such as the bas-relief arch.

The toast, known as a tamada, is reserved for the most charismatic man who can also hold his drink. He is required to glug a two-litre horn of wine

Back on the road, we followed one of the ubiquitous “wine route” signs that direct you to Georgia’s countless wineries. The country has been making the stuff for 8,000 years, using their 525 endemic grape varieties which grow under distinct microclimates that can vary by the kilometre. An increasing number of wineries now offer tasting sessions and excellent food. Khareba Winery in Khveli is one fine example. We stopped by to learn about Georgia’s unique khvevke wine production, which is completely organic, using no sulphur or yeast: grapes are placed in a hole lined with beeswax and left to ferment – skins, vines and all. The grape juice separates naturally from the skin and vines before sinking to the bottom. For white grapes the result is an amber coloured wine, low on tannins. The grape skins and vines are later distilled into chacha, an eye-wateringly strong spirit, which I sipped after lunch on a veranda overlooking the surrounding gardens.

Wine occupies a huge role in the spiritual and social life of Georgians. It accompanies traditional feasts that can go on all night, the hours punctuated by a toast to family, friendship and love. This toast, known as a tamada, is an art form reserved for the most charismatic man, someone full of guli (warmth) who can wax philosophical and – importantly – hold his drink because he is required to glug a two-litre horn of wine (“He must finish it for love”). The festivities are often accompanied by folk singing that sounds like a hybrid of Gregorian chant and Mongolian throat singing, rich with pathos. 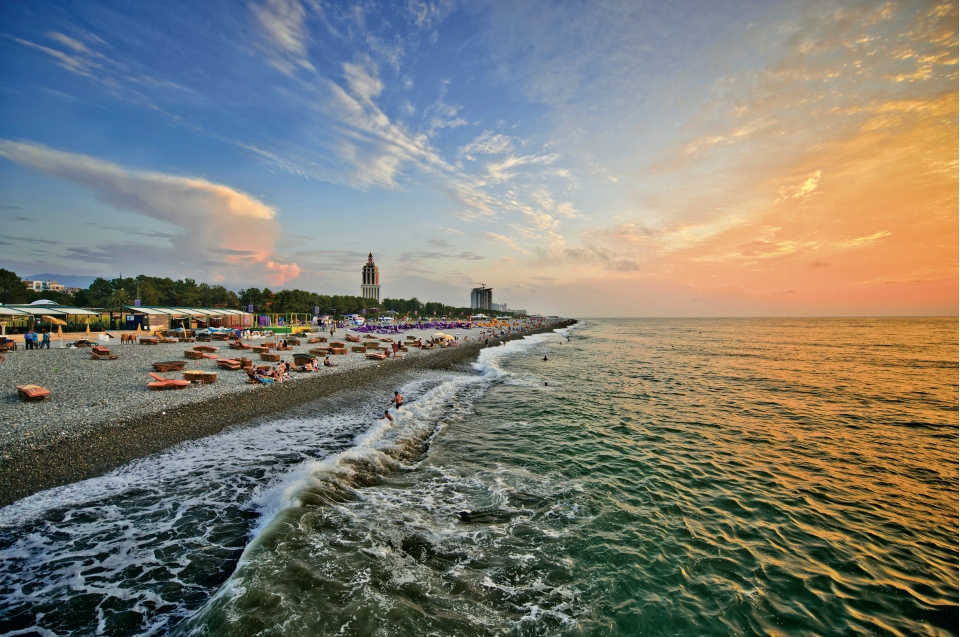 After days in the countryside, our arrival in the capital, Tbilisi, was a sensory jolt of the best kind. Tbilisi has come into its own since the Rose revolution’s pro-democracy protests in 2003. From the cable cars rising above the city you can take in the dramatic topography where Armenian churches, mosques and bathhouses sprout from the hillside, and other buildings cling to rocks that rise steeply from the Mtkvari River. There’s an emerging buzz and glitz here, judging by the sinuous steel and glass Bridge of Peace spanning the river, or the $50m futuristic hillside home of billionaire Bidzina Ivanishvili. But the Old Town and its waterfall have retained their peaceful, atmospheric magic, a clutter of chromatic wooden balconies that descend from the 4th century Narikala Fortress.

Dinner was at Barbarestan Restaurant, located in an atmospheric 19th century wine cellar. Its unique selling point is its menu, based on an 800-recipe cookbook by an 18th-century aristocrat. Six courses later I returned to my hotel The Rooms, a hipster chic outfit in the central Vera district. An exuberant floor-tiled library dominates its reception, and each room exudes retro glamour in the form of patterned wallpaper, old-school telephones and Bluetooth Marshall speakers.

Across the river, Fabrika Hostel offers a cheaper but equally intriguing accommodation alternative. This converted Soviet sewing factory has deep sofas, a bar, restaurant, plus stacks of fliers for cultural events in Tbilisi’s emerging rock, EMO and LGBTQ scene. You can hang out in the central courtyard which is ringed by more bars and shops selling vinyl records, ceramics and other art. A motorcycle rental company even has drivers who can take you on a high speed tour of the city centre.

Our final stop was Batumi, a subtropical playground by the Black Sea, and holiday-home favourite among Georgians. This port city is a magnet for visitors from neighbouring Turkey and Israel, wanting to enjoy the pebbled beaches, casinos or a stroll along palm tree-lined avenues. You can still see the now-defunct chacha fountain, which once spewed genuine Georgian vodka free of charge.

Soon after we arrived a wedding cavalcade screamed down Rustaveli Avenue, horns beeping. In Batumi, anything goes, and that includes the architecture, which is reason alone to come here.

Its toy-town mash-up of experimental styles is unlike anything you’ve seen: multi-coloured sixties blocks are foregrounded by gold statues a stone’s throw away from art nouveau beauties and 18th century Russian classicism in central squares planted with orange and magnolia trees.

Government efforts to spruce up Batumi’s architecture can be seen in the Soviet monolith now draped in a modern swirly facade; or the Gaudi-esque modern edifice next to it; or the Alphabet Tower, a DNA helix-style skyscraper with a spherical restaurant at its summit. The central piazza contains a mosaic floor that bears no stylistic relation to the adjacent kitsch clock tower hotel, but that’s all part of the charm.

Alternatively, you can hire a bike and ride along the dedicated cycling lanes and stop for lunch at the beachside Gold Fish restaurant. Its glass frontage gives magnificent views of the Black Sea and surrounding hills, and reminds you once again of Georgia’s persistent natural beauty.

Wizz Air (wizzair.com) flies direct from London Luton to Kutaisi twice a week (Thu and Sun), with tickets from £48 return