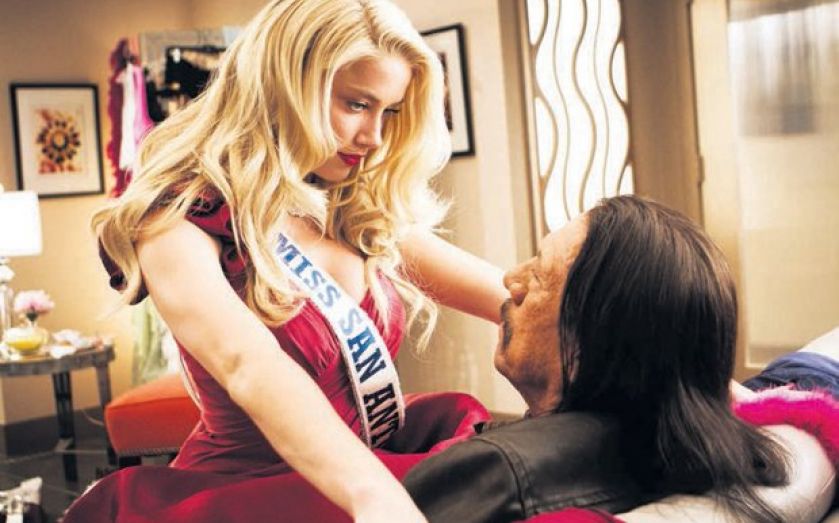 MACHETE KILLS hits you like a shot of tequila. It’s a frantic, stupid, cartoonish mess and that’s what makes it so fun.

He imbues the role of the world’s toughest, most attractive man, with far more credibility than any leather-faced 69-year-old reasonably should. Although he is required to do little more than look mean and hack appendages, he provides a solid thread through the chaos.

The Machete film franchise grew out of a spoof trailer in Rodriguez and Quentin Tarantino’s 2007 tribute to exploitation cinema Grindhouse. Machete Kills continues in this tradition, sucking viewers in immediately with a fake trailer of its own before jumping into a massacre perpetrated by evil luchadores.

The sets and effects look like they come from a mid-budget 1980s action series, complete with nonsense dialogue, extravagant violence and appalling sexual and racial slurs. Some viewers will find it utterly repellent, but for fans of the lost art of the B-movie, it’s a treat.

Charlie Sheen embraces his Latin roots and is credited under his birth name – Carlos Estévez – as the weed-loving U.S President Rathcock, who offers Machete citizenship in exchange for his assistance in silencing some of the President’s enemies.

There are also welcome appearances from members of Rodriguez’s repertory company, such as Jessica Alba, Antonio Banderas, and even a slightly uncomfortable cameo by the little girl from Spy Kids, Alexa Vega, who apparently grew up to become a murderous hooker.

However, the most satisfaction comes from those playing a version of themselves.

Lady Gaga is quite at home in her big screen debut – the intentionally gimmicky world of Machete fitting perfectly with her campy aesthetic – and Mel Gibson is magnificently loathsome as the Moonraker-inspired kingpin Voz.

It’s as if the last decade of unflattering headlines about his personal life were a consequence of his method preparation for the role.

The momentum and coherence of the film breaks down as things progress but it finds itself towards the conclusion again.

The ending suggests another gloriously stupid sequel is to come – if you like Machete Kills, you will love Machete Kills Again… In Space!