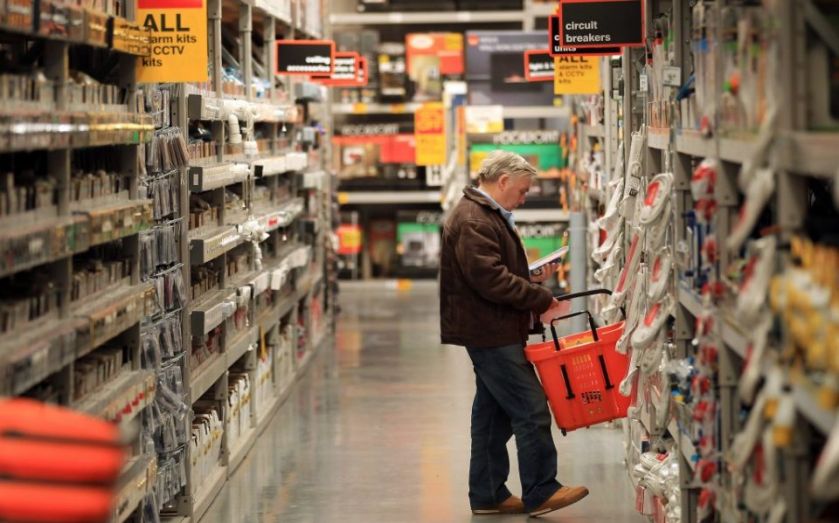 Kingfisher's profits fell last year despite an increase in sales, but plans to close 60 B&Q stores have sent shares up.

The DIY retailer, which owns B&Q among others, experienced a 2.9 per cent increase in sales last year, but its pre-tax profits fell 7.5 per cent to £675m.
The figures, for the 12 months to 31 January, were partly due to slower market in France since summer 2014 – sales in the region fell one per cent during the period. Performance was best in the UK and Ireland, where sales rose 5.5 per cent.
The company pointed to the strong pound – leading Véronique Laury, who was appointed chief executive in September last year, to announce the closure of 60 stores in the UK and Ireland.
"Kingfisher has said for some time that B&Q UK and Ireland can adequately meet local customer needs from fewer stores and that some of the stores should be smaller," the company said in a statement.
Shares reacted positively to the news, rising 3.59 per cent to £3.78 in morning trading.

Laury took over the role from Sir Ian Cheshire at a difficult time for the company. In September last year, it reported weaker than expected sales despite an upturn in the housing market, with pre-tax profit falling 6.5 per cent during the six months to 2 August.
Then, in the third quarter, the company's sales fell 3.6 per cent to £2.8bn, while retail profits dropped 11.8 per cent to £225m.
The company has already made changes since Laury joined – in December last year, it sold off its B&Q business in China for £140m to Wumei Holdings. B&Q first opened its doors in the country in 1999 but found demand for DIY has yet to take off as it has in western markets.
Investors responded positively to the news, sending a long-term downward trend in share price on an upward trajectory. Shares have been increasing in value since then.

Yesterday, Kingfisher announced the imminent collapse of a deal to buy French chain Mr Bricolage – a plan first drawn up a year ago. Shares rose 2.5 per cent to 367p in early trading following the news.

We have a lot to do and we are announcing today a set of first 'sharp' decisions which are already underway including the closure of around 15% surplus B&Q space (c.60 stores) and our few loss making stores in Europe, the development of unified garden and bathroom businesses and the start of a Big Box revitalisation programme across Europe.
In addition, we will be developing our detailed plans for the wider reorganisation of the company as we progress on this exciting journey towards becoming "One" Kingfisher.

The profits draw an end to a bad year for Kingfisher, but recent reactions to the company and its business decisions reflect a more positive outlook among investors. It looks like 2015 might bring more luck to the DIY retailer, especially with Laury on board.
Share
Tags: Company Kingfisher