Can you improve on perfection? In the case of the Jaguar E-Type, it seems so. Thankfully, that doesn’t mean giving the ‘World’s Most Beautiful Car’ a modern makeover; this Series 3 Roadster looks near-identical to how it left the factory in 1971. Under those voluptuous curves, however, many mechanical and electrical parts have been upgraded. And the result is the car I always dreamed the E-Type would be.

The E-Type caused a sensation when it launched in 1961 becoming an instant icon of its era. By the time the V12-engined Series 3 debuted a decade later, though, it had succumbed to middle-age spread, morphing from nimble sports car to long-legged cruiser. I sampled a Series 3 V12 a few years ago and, frankly, it was a letdown. The three-speed auto transmission was lazy and the chassis felt less focused than a toddler on tartrazine.

That’s where E-Type UK comes in. The Kent-based company has a reputation for building tastefully tweaked E-Types, including the headline-

grabbing ‘Project Zero’, a 6.1-litre Series 3 with LED headlights, air-con, heated seats and a surround-sound audio system. The Carmen Red car I’m driving today – currently for sale at £170,000 – is less extreme, and thus, I suspect, more appealing for many enthusiasts. “It’s the best of both worlds,” says Bob van Vuuren of E-Type UK, handing me the keys.

My Series 3 still has the regulation 5.3-litre V12, albeit with fuel injection (from a Jaguar XJS), a bespoke ECU, uprated alternator and alloy radiator. This boosts power to 275hp and vastly improves reliability. “The original carburettors suffer from fuel evaporation when hot and take forever to warm up in winter,” explains Bob. “This starts first time, every time.” Going carb-free also aids fuel economy, although don’t expect any plaudits from Greenpeace; a dismal 16mpg rises to 22mpg here. 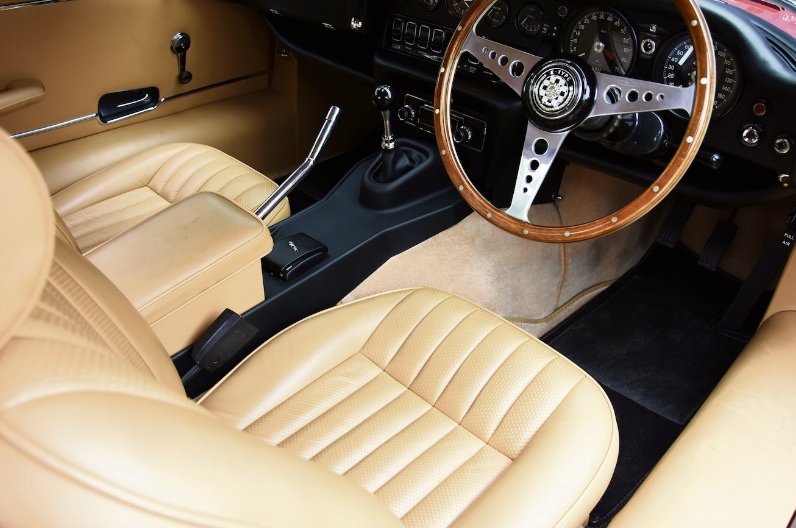 Creamy luxury inside the Jag E-Type

Elsewhere, E-Type UK has replaced the factory automatic ’box with a five-speed manual, plus added new suspension with stiffer anti-roll bars, AP Racing front brakes and power-assisted steering. A smaller, sportier Moto-Lita wheel is fitted – the added benefit being that it no longer rubs on your thighs – but the cabin is otherwise reassuringly retro. Even the MP3-compatible stereo resembles the 1970s original.

True to Bob’s word, the V12 fires on the button, white-on-black Smiths gauges springing smartly to attention. Exhaling through four stainless steel tailpipes, it sounds wonderful: a mellifluous, multi-layered burble that hardens to a mechanical rasp as the revs rise. Despite my modest 5ft 8in frame, I’m staring straight at the windscreen header rail, so have to recline the seat (there’s no height adjustment). The view along that famously long, power-bulged bonnet is one of the most evocative in all motoring.

It’s a cold, crisp winter afternoon, so the roof is down and my parka is zipped fully up. Heading south on quiet rural roads, the Jaguar immediately feels livelier than the car I drove previously. Its steering is fingertip-light, yet quick and accurate, and the short-shift gearbox has a notchy directness. The beefed-up brakes feel on par with those of a modern car.

The real revelation here, though, is the handling: the wallowy waft of a standard Series 3 swapped for finely-damped finesse. The big V12 still majors on low-down torque, of course – it pulls strongly from 2,000rpm – but the E-Type no longer feels out of its comfort zone on twisty Tarmac. Its inner sports car has been unleashed and I’m relishing a drive I’ll remember for all the right reasons.

The light is fading as I return to the workshop, my faith in E-Types duly restored. In truth, no car is perfect, but this comes a lot closer than most.