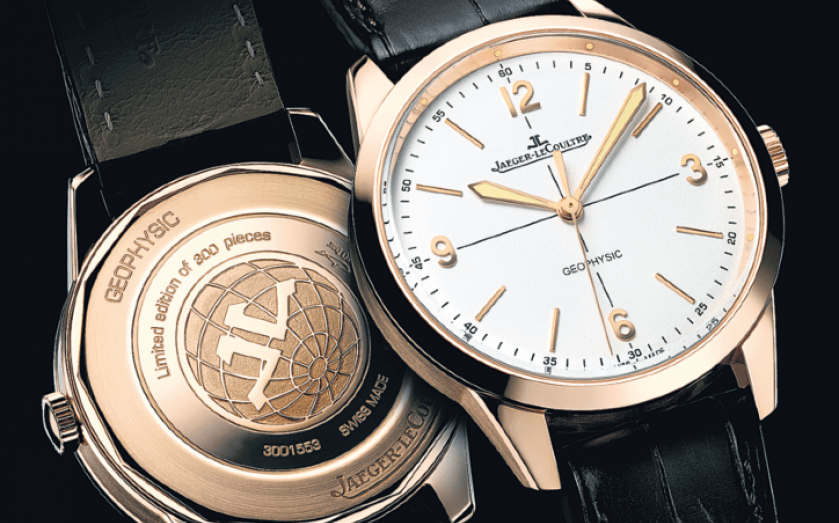 Over the next month, aspiring young eyes will gaze up at television screens in unequivocal hero-worship of several talented but nonetheless overpaid, preening athletes. By association, kids will covet their cash, fame, cars and those FIFA-licensed, chunky-gold Hublots on their wrists.  Hard to believe, by contrast, that just six decades ago children of a similar age looked up instead to scientists, explorers and engineers. With the space race gearing up, and the Cold War driving breathless technological innovation on both sides of the Iron Curtain, comics like The Eagle and Boy’s Own championed the boffins of the world; the Tiger’s Roy of the Rovers formed a rather camp sidenote.  It is this plucky, pioneering era that Jaeger-LeCoultre is returning to this year, with the reissue of its no-nonsense Geophysic 1958 – named after a major programme of scientific explorations that same year. Like Rolex’s Milgauss and IWC’s Ingenieur (both still in production) it featured a rock-solid movement protected from magnetic fields by a soft-iron inner case, acting as a Faraday cage.  “It was designed by taking the very best of what we could do at that time,” explains JLC’s director of marketing, Stéphane Belmont. “We then added features for engineers working with big electromagnetic machinery. As well as the inner case, there was stop-seconds for precise timesetting, anti-shock bearings and resistance to sub-zero temperatures.” This sub-zero hardiness played a big part in Geophysic’s most famous exploratory association, with the US Navy’s Operation Sunshine of 1958 – a drily ironic name, given that the mission involved transitting the North Pole entirely beneath the Arctic ice cap.  It was in response to the nuclear ICBM threat posed by Sputnik that President Eisenhower ordered the US Navy to attempt this daring adventure, to gain credibility for submarine-launched weapons. The only vessel that would do was the USS Nautilus. Named after Jules Verne’s own submarine from 20,000 Leagues Under the Sea, it was the world’s first atomic-nuclear vessel and therefore the only one that could power itself autonomously for three days straight beneath the ice. The fact that compasses don’t work at the North Pole makes the feat all the more remarkable. “The city of Geneva paid tribute to the adventure,” explains Belmont, “by gifting the two commanders of Nautilus with a Geophysic watch. “There were so many good watches being made in Switzerland, but the city chose us.” True to the spirit of the original, the new re-issues are not actually re-issues – they’re “re-editions”, improving on things using today’s tech. For example, the movement inside is now JLC’s finest automatic (the 898/1), which must pass the gruelling 1,000 Hours Control. Whether its customers will end up putting the remarkable capabilities of this watch to the test is doubtful. But wouldn’t you rather wear the same watch as the pipe-smoking pioneers of the Fifties than the bling-bling of today’s footballers?   Geophysic 1958 is limited to 300 in pink gold (£13,900) and 800 in steel (£6,350). jaeger-lecoultre.com
Share
Tags: NULL