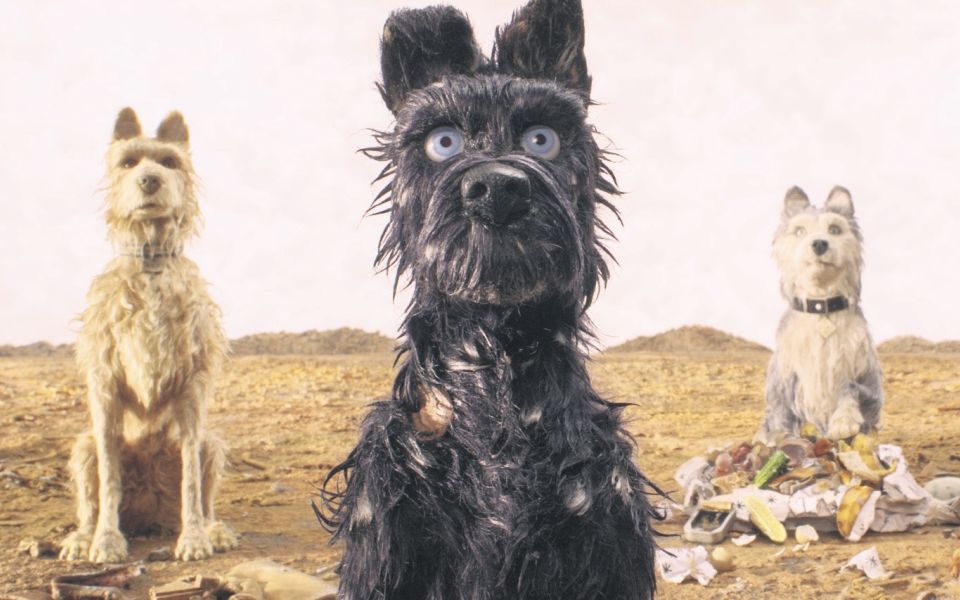 Wes Anderson’s latest film takes place in a hyper-stereotyped, near-future Japan, in which dogs have been cruelly banished to a trash island under the invented pretence that they’ve succumbed to a mix of highly infectious dog flu and “snout rot”.

The director’s second stop-motion project (the Roald Dahl adaptation Fantastic Mr. Fox being the first) follows a pack of exiled pets, voiced by Anderson’s trademark cast of sarcastic deadpanners. Norton, Murray and Goldblum are joined by Bryan Cranston as the redemptive stray Chief, and Scarlett Johansson as an improbably well-groomed show dog. Tilda Swinton is a clairvoyant pug with about three lines. Together with human boy Atari, who crash-lands on the island in search of his own dog, they embark on a mission to overcome intolerance and thwart the corrupt mayorship responsible for deporting all the pooches.

Isle of Dogs is riddled with wonderful handmade detail, with a craftsmanship that can transform a burst-open sack of maggot-infested garbage into an intricate toy-box tableau. The dogs’ base of operations is a glittering Aladdin’s cave of backlit, multicoloured sake bottles. Clouds and puffs of smoke are rendered in snapshots of fluffy cotton wool. And the island’s varied wasteland of compacted scrap and skeletal factories form a potent post-industrial backdrop for the film’s eco-themes.

If Fantastic Mr. Fox marked the director’s explorative first steps into stop-motion, this film demonstrates Anderson’s mastery and personalisation of the form. And if Aardman’s trademark is a literal fingerprint in the clay, Anderson’s just might be the jaggedy, every-other-frame fluttering of canine hair.

The film doesn’t deviate from the director’s whimsical-reality ruleset: symmetrical framing, swing-around panning, drumbeat pacing, dollhouse lighting, restricted colour palettes. By peering at Japan through cartoonifying Anderson-goggles, Isle of Dogs is able to run the gamut of Asian tropes in good faith. Bullet trains crash, tsunamis are triggered by earthquakes triggered by volcanoes, there’s sushi, samurai, cherry blossoms and sumo, but none of it is at anyone’s expense, and it’s all way too thoughtful and affectionate to feel exploitative.

There’s a lack of a satisfying emotional payoff in the end (especially for a film about dogs, the animal most capable of yanking a heartstring or two) and the frayed plot juggles too many disparate protagonists without convincingly marrying their stories. But even if it’s more bark than bite, Isle of Dogs is at least a beautiful, artful and sonorous bark, guaranteed to bring you to heel.