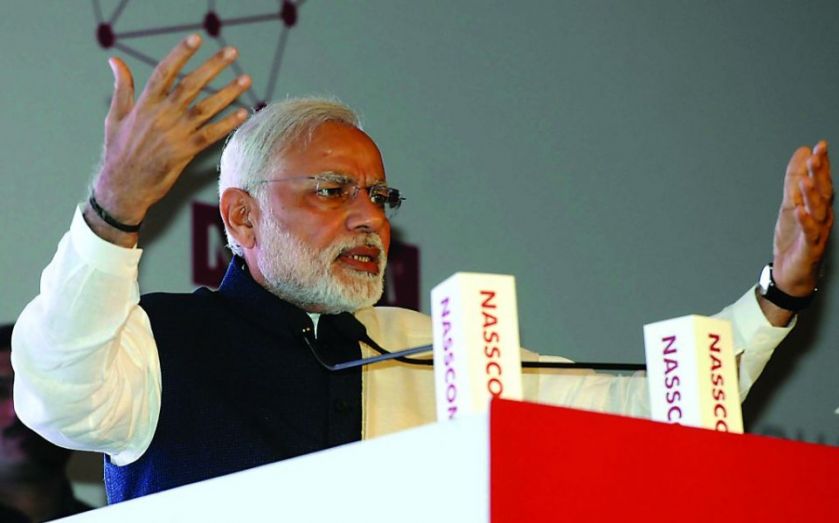 Business gave a cautious welcome to the Indian government’s landmark budget yesterday, highlighting its bid  to unify the country’s fragmented  markets and boost growth through tax cuts and infrastructure investment.

“It delivered on all counts. The Prime Minister set out a vision and the budget lays it out as a roadmap,” Karan Chanana told City A.M.  Chanana is chairman of Amira Nature Foods, a company listed on the New York Stock Exchange with its production  based mostly in India.
When Prime Minister Narendra Modi was elected little under a year ago, economists were expectant of sweeping, free market reforms. “We should give a warm welcome to this budget as at least semi-radical,” Alastair Winter, chief economist at investment bank Daniel Stewart, told City A.M.
One major step was the April 2016 deadline for the introduction of a goods and services tax (GST). The tax is similar to value added tax in the UK, but in India such taxes are currently administered at a state level and not a country-wide one, which fragments Indian markets. “The GST is a step towards making India a common market. We have 30 states and a couple of territories and it’s not a common market yet. Having set a timeline for it is a big step forward,” Chanana said.
On top of the GST tax came big boosts to investment. Finance minister  Arun Jaitley earmarked 700bn rupees (£7.4bn) for infrastructure spending  as well as a plan for five ultra mega power projects capable of producing 4,000 megawatts each.  That is about the same output as Drax – a large coal-fired power station in North Yorkshire – whose generating capacity of 3,960 megawatts is the highest of any station in the UK and western Europe.
Companies will be boosted by cuts to the corporation tax rate which will be reduced to 25 per cent from 30 per cent over the next four years. To finance the investment pledges, the pace of fiscal austerity will be slowed down with the government’s budget deficit target of three per cent moved back a year.
While Modi’s budget is living up to a pro-growth agenda, there is plenty more to be done on the reform side. One of the most pressing issues in India on the supply side is the country’s land acquisition laws.
“Difficulties in land acquisition are a key reason behind the slump in new investment projects,” said Shilan Shah from Capital Economics. If an investor wants to build a factory in India, they must compensate the landowner at a rate above market value for the land as well as gain approval from a variety of stake holders. A reform to this law has already been passed, but only as a short term emergency measure called an ordinance which will be reversed unless it gains parliamentary approval in the coming weeks.
But there are doubts this is feasible politically.
“The Rajya Sabha (India’s upper house) rejected the initial amendments to the bill before the ordinance was enacted, and there is little to suggest that things will be different this time around,” Shah said.

■ A country-wide goods and services tax to be implemented in 2016 that will replace fragmented taxes at the state level.
■ Government investment in infrastructure of 700bn rupees.
■ A cut in the rate of corporation tax from 30 per cent to 25 per cent.
■ Four major power stations, each capable of reaching a capacity greater than Drax, the biggest plant in western Europe.
■ The budget deficit target of three per cent of GDP will be moved back a year, to free up funds for the spending pledges.
■ Wealth tax replaced with two per cent surchage for people with incomes over 10m rupees (£105,000).
■ Tax free bonds for rail projects.
Share:
Tags: Indian economy