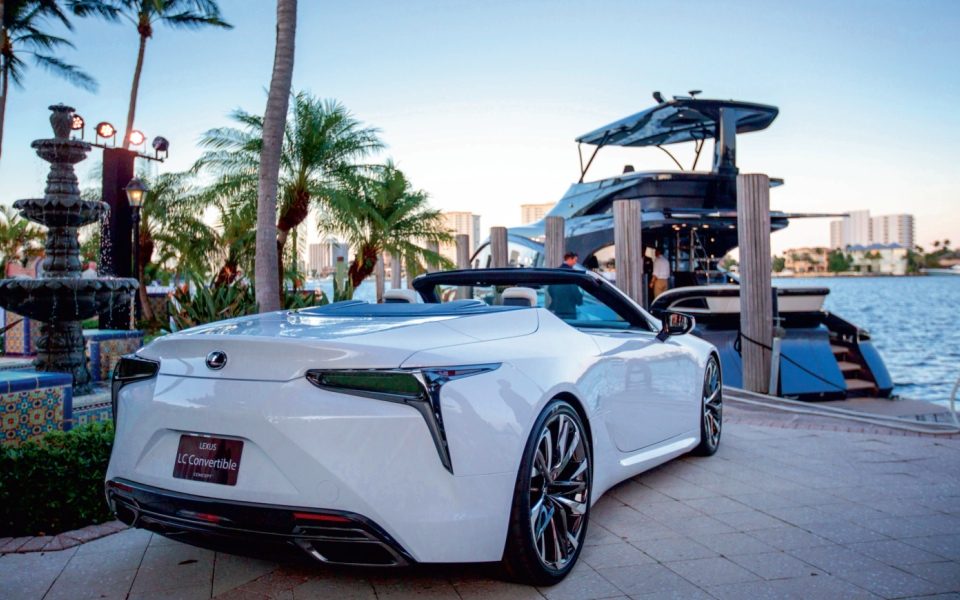 A few years ago, at the prestigious Pebble Beach concours in California, the president of the Toyota Motor Company was holding court and pressing flesh. Akio Toyoda, 63, is the grandson of Toyota’s founder and so, you can imagine, he takes enormous pride in its products, and none more so than its luxury off-shoot, Lexus.

But during this meet-and-greet a guest was unexpectedly candid with Toyoda-san. “Lexus is just soooo boring,” they complained. This is Akio’s response: I’m in Boca Raton, 40 miles north of Miami, to see the Lexus LY650, the company’s new flagship… literally. It’s not a motor car, it’s a motor yacht. And a very stylish 20-metre 2,100bhp one at that.

Major League Baseball is even bigger in Japan than it is in the US, so to make the £3m boat even more glamorous, Mr Toyoda has invited J.Lo’s other half, A-Rod, to smash the champagne bottle. And with that, my fellow seafarers and I kick back and cruise down to Miami along a corridor of multi-million dollar waterfront homes.

It’s here that I split from the group and make my own plans. I’ve arranged to get to grips with the car that inspired the yacht’s design, Lexus’s sleek LC500 coupé.

It has a sprawling spindle grille like a great white shark’s gob, yet it’s a truly elegant piece of 2+2 GT design. Think of it as an Aston Martin DB11 from the Far East. It has thin, sharp lights, high flanks and a low bonnet and roofline. Its wide, subtly meaty stance is emboldened by a seductively pinched waist. And there’s substance beneath the style; a glorious 5-litre 471bhp normally-aspirated V8.

Such an artful piece of automotive sculpture calls for a trip to Wynwood and Miami’s Design District. The former is a neighbourhood that’s been taken over by street artists and creatives. A collection of walls, warehouses and the sides of buildings represent a blank canvas for graffiti and some of the most famous practitioners in the world have left their mark. It’s an open-air gallery, established to coincide with Art Basel, which has blossomed into a haven of murals.

Nearby, in the fashion and architectural playground of the Design District, I’m able to slot the LC500 into its very own artwork. When you think of a multi-storey car park you think of concrete columns and bad overhead lighting. Not so at the Museum Garage, a seven-storey parking lot with five different facades by five different architects.

One features the red abstract shapes of vehicle brake lights, another has the orange and white stripes of traffic barriers. Inspired by the movie Inception, 45 metallic American cars have been placed in a vertical traffic jam. Another façade is inspired by Japanese anime and European baroque, with black and white renderings of elephants, gargoyles and caryatids.

Tonight I’m staying on Miami Beach’s Collins Avenue. Located among the quiet, classy blocks north of bustling Ocean Drive, The Setai is an Asian-influenced boutique hotel housed in an historic Art Deco building, designed in 1936 by the renowned Henry Hohauser, who was also responsible for the Cardozo, the Edison and the Colony.

Throughout The Setai, which includes an 40-storey tower extension, one finds Indonesian bronze, Burmese teak, individual brickwork imported from Shanghai, Japanese calligraphy and stingray skin on the door handles. It also has the best selection of Japanese whisky in the state. The Kardashians regularly rent the penthouse, which is a surprise given how discreet this place is. I love its Jaya restaurant, led by chef Vijayudu Veena, which fuses cuisine from Thailand, Vietnam, India, China and Japan. I opt for scallop and shrimp dumplings with shaved black truffle, followed by a wagyu striploin.

The LC500 is a melange of sorts itself. It’s built using the Japanese philosophy of ‘takumi’ craftsmanship and the leather stitching uses the same ‘sashiko’ techniques that have been applied to judo uniforms for 1,200 years. Yet the glorious turbo-free V8 feels like American muscle and the dynamics are thoroughly European, with a taut chassis and precise, communicative steering. At £78,000, it undercuts the equivalent Porsche 911 S and V8 Jaguar F-Type and is far more exclusive. The following morning, I have to prize the key off the valet.

My destination is the Florida Keys. The Lexus prowls along Ocean Boulevard as everyone descends for brunch, passing the Villa Casa Casuarina, the former home of Gianni Versace. It burbles across the MacArthur Causeway, ritzy Star Island to the starboard side and mammoth cruise ships to the port. Soon I’m on US Route 1 bound for Key West; 160 miles of strip malls, mangroves, marinas and cerulean seas, most notably the overseas highway – Seven Mile Bridge – on which Arnold Schwarzenegger called in a Harrier jet strike in True Lies.

The LC500 is just as brutal when you want it to be, but it rides effortlessly with just the right amount of firmness. Its ten (!) automatic gears mean its firepower is always right there, locked and loaded in its torque band, especially in Sport+ mode. Inside, it’s as ergonomic as a fighter’s cockpit, but with much higher quality materials. It puts Porsche and Jaguar to shame.

Key West lies at the southernmost point of the United States. It’s closer to communist Cuba than it is to a Walmart. I check into the Casa Marina, a Waldorf Astoria resort right next to the southernmost marker where thousands of tourists queue every day to have their pictures taken.

Presidents have made frequent appearances in Key West, and they stay in the old town in what was a naval station. Harry S Truman spent 175 days of his premiership at what he called The Little White House, enjoying the sunshine while recovering from the exhaustion of office. It’s a charmingly modest unflashy abode, compared to Mar-a-Lago at least. Taft, Eisenhower, Kennedy and Carter also stayed here. Since 1991, it’s been open to the public. Most recently, the Clintons made a weekend of it.

The other house worth a visit is Ernest Hemingway’s. Located on Whitehead Street, just down from my hotel and opposite a lighthouse Hemingway used to guide himself home when sozzled, the swashbuckling author lived here between 1931 and 1939 and penned To Have And Have Not in its study, above what’s now a visitors’ café. Descendants of his six-toed cats roam freely. The garden features a urinal he obtained from the nearby Sloppy Joe’s tavern, now a water feature, and the first swimming pool to be built on the island. His second wife, Pauline, had it constructed while he was away documenting the Spanish Civil War. It cost $20,000, which was more than twice what the French Colonial style residence was worth.

Upon his return, with mounting anger regarding the bill, he tossed a coin into the pool and announced to his wife: “Well, you might as well have my last cent”. Slightly unfair, as she was the money and he was the typical starving writer scrounging off his spouse. It turns out James Bond visited Hemingway’s house in 1989’s Licence To Kill, in which it posed as MI6’s Floridian headquarters. On announcing his resignation from the Secret Service (“We’re not a country club, 007”) and forced to hand over his gun, he said to M: “I guess it’s a farewell to arms”. I never understood the context of the reference until now.

Duval is the bar-packed main street, where you’ll still find a Sloppy Joes, but the original pub where Hemingway ordered his daiquiris is now called Captain Tony’s, and aficionados of sticky, raucous dives will delight therein. For a more cultivated cocktail I recommend General Horseplay which, I was informed by the barman, is owned by the patron saint of maverick imbibers, Bill Murray.

After a weekend of daiquiris and jet-skiing, I aim the Lexus north and set Miami as the target. The low-lit ambiance of the Setai awaits, while Key West disappears in the mirrors to the echo of eight cylinders. The LC500 is a Japanese fusion concept that’s perfectly suited to an American road trip with its comfy ride and roaring engine. And, like the yacht, there’s a sense of occasion that’s unusual for this brand. Akio Toyoda has succeeded: there’s nothing boring about either of these Lexi.

• Rooms at the Setai, on Miami Beach, start at £500 per night. www.thesetaihotel.com