It would be too easy to dismiss Mallorca as simply a package holiday destination crowded with ex-pats and fake-tanned Love Island wannabes.

But Palma, the Balearic Island’s elegant and historic capital, has now firmly shaken off its package-holiday past. Once the gateway to Mallorca, Palma is now a high-end destination with two Michelin-starred restaurants, designer shops and the opening of five five-star boutique hotels since 2016.

The annual report from Engel & Völkers confirms the strength of the luxury property market in the Balearics. The German market continues to lead the way, followed by the British and Scandinavians.

“We have even found Roman antiquities during the renovation”

Brexit, as far as the British are concerned, appears to have had very little influence. One of the most expensive properties there last year went to a British buyer for €25m.

In Palma, the average price of a luxury apartment in Portixol is €800,000, while for houses in the old centre, the average is around €4m.

But those wanting their own piece of history in the Old Town of Palma might consider a permanent residence in the splendour of a Renaissance palace.

Just minutes from the city’s 13th century cathedral, Pont I Vic was originally constructed by the Morel family in the 16th century, but is now being transformed into nine thoroughly 21st-century apartments. Priced from €600,000 to €4.1m, they are distinguished by their period features and panoramic views taking in the cathedral and the rooftops of the old town.

All apartments are freehold and have large, open-plan living spaces with large amounts of natural light. The project offers five penthouses with large roof terraces and four large apartments.

Two of the penthouses and one apartment on level one have already been sold to families from Switzerland, Sweden and Germany. 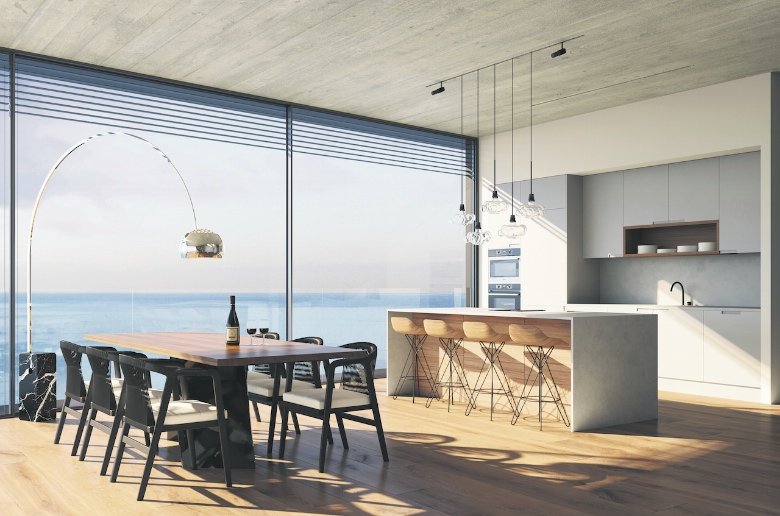 A kitchen/dining area in Mirador

One buyer has decided to make Pont I Vic their main family residence, while the other purchasers plan to keep the property as their second (or third) holiday home. None wish to rent them out.

One penthouse, priced at €4.1m, (plus 10 per cent VAT and fees) offers a total living area of ​​275m2 distributed over 3 bedrooms with en-suite bathrooms and an impressive roof terrace of 46m2 has an upper part where you can sea views. Charges for communal facilities will be around €120 a month.

“We have even found Roman antiquities during the renovation,” says Torkel Hellberg, head of sales for the developer, House by Sanz.

“So we were very keen to preserve as much of its original character as possible, while combining Renaissance and medieval elements with world-class modern architecture and Swedish design.

“This is the first premium residential project in the historic centre.” 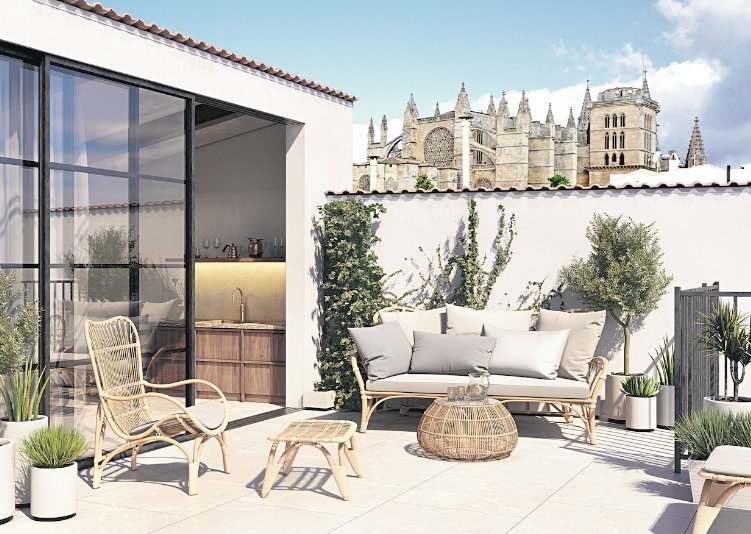 Land in Mallorca is extremely scarce and with the increasing demand and short supply, prices are expected to rise in the years to come.

“Prime properties in Palma can go from around €6,000 psqm to €19,000 psqm. This specific project is the first and only in historic Palma and is expected to revive and reshape this old part of town, offering an average of €10,000 psqm,” he added.

For those who prefer sea views, just 15 minutes’ drive east of Palma along the coast is the upmarket town of Cas Català. It is an affluent part of Mallorca and home to many villas and swimming pools.

Set on the Carrer Bell Puig, the same developer is building five spacious apartments of four bedrooms each, all boasting sea views. Prices range from €1.99m – €3.99m and the apartments are two minutes’ walk down to a small beach.

"Only one in 10 properties on Mallorca is new build, and just 10 per cent of those are located in Palma, so demand for new build in this area far outstrips supply. Foreign buyers tend to snap up the high-end properties first, with British buyers being the third biggest investors,'"  says Klaudia Laurincova, Spanish destination advisor for Athena Advisers, an estate agency handling sales for both developments.

Up one level, there’s just one apartment taking up the whole floor of 222 sqm. The sea views from the front terraces are panoramic from up here.

Behind, the apartment leads out onto a large garden with a pool. Two duplex penthouses take up the remaining top floors of the project with more impressive sea views the higher up you go and terraces on each level to take advantage of them.

The exterior will be modern, but will use natural materials such as stone to help integrate the facade into the surrounding natural environment. They will be completed in early November 2019.

A third project in the pipeline is located at Cala Major, 10 minutes’ drive from Palma. The Mirador development, due for completion in 2020, will comprise seven apartments each with private garden, or terrace and pool.

With sheltered sandy beaches and idyllic turquoise shallow waters, it is no wonder the Spanish royal family has chosen this location for their own summer holiday home.