Hating Peter Tatchell review – a profile of an anarchic hero 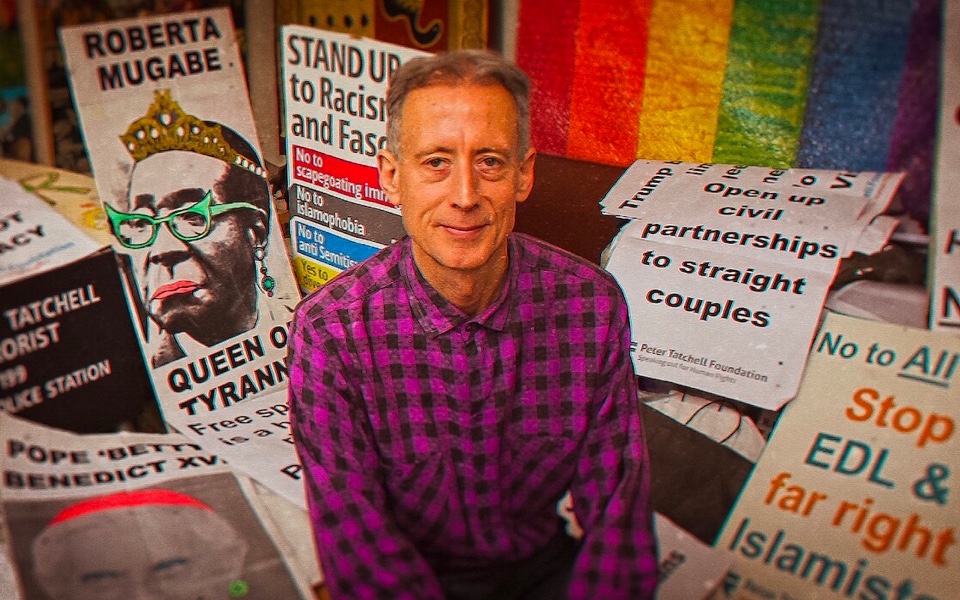 The advent of social media has made activism a daily practice for many, and something that’s witnessed by many more. From symbolic gestures to mass demonstrations, it feels as though mobilising a group to get their voices heard is easier than ever. Hating Peter Tatchell looks at a man who was putting a spotlight on important issues decades before the hashtag, and the lengths by which some with go to fight oppression.

Born in Australia, Tatchell became famous over the years as a vocal campaigner against injustice around the world. Primarily fighting for LGBTQ+ equality, he has also protested against the war in Vietnam, and famously attempted to conduct a citizen’s arrest on Robert Mugabe. His elaborate publicity stunts, always with media in tow, creatively bring attention to problems suffered by marginalised groups, and use headlines to prompt a discussion. Depending on who you ask, he is “The Most Hated Man In Britain”, a hero, or something in between.

Produced by Elton John and David Furnish, Christopher Amos’ documentary brings in a few notable talking heads to cover Tatchell’s life, from his religious upbringing right up to the 2018 World Cup in Russia, where the production follows him on a protest that grabbed the world’s attention. Figures like Stephen Fry, former MP Chris Smith, and various LGBTQ activists describe the times in which they and Tatchell lived. Elegantly restored footage looks back at a London where being gay was a criminal act, and at the horror of the HIV/AIDs epidemic of the 1980s. As Tatchell puts it, “outside of a battlefield, men don’t die in such numbers”.

Tatchell is interviewed by Sir Ian McKellen, a gentle but surprisingly engaged question master, while the interviewee himself is amiable and seems far from the figure we see holding placards and being dragged away by police. However, just when you think this may be turning into a PR exercise, it takes a look at the tougher questions.

As we see from Tatchell’s endeavours, being courageous doesn’t always mean you are likeable. The passion and drive to make change also made him an abrasive figure, even to those who March beside him. The film addresses Tatchell’s ‘outing’ of several prominent Church of England Bishops in the 1990s, for instance, an act condemned by the media and many in the LGBTQ+ community. For him, it was “gay self-defence” against hypocritical figures who were damaging communities they secretly belonged to. However, it also lost him some allies. Even the always affable Fry winces at the memory, while Stonewall founder McKellen recalled how it helped his organisation be looked upon as the rational alternative in LGBTQ+ lobbying.

It’s the film’s most fascinating moment, looking at how the nuclear option was the most pragmatic way of making a change. It’s hard to deny that these actions didn’t ultimately end up moving us toward a better world, but taken in isolation they are difficult to endorse. The eyes of former Archbishop of Canterbury, Dr. George Carey, still flicker with anger when he recalls Tatchell storming his Easter Sunday sermon in 1998 to condemn the Church’s stance on LGBTQ+ rights.

Looking back, he remains unrepentant, and perhaps that’s the point. Aside from the subject, the other lead character in this story is Britain itself. We see a lot of archive coverage, much of it unpleasant, from the horrifying smear campaign that followed his candidacy in a Bermondsey by-election in 1983 to interviews with the public displaying attitudes that are unthinkable now. Worse still, we are shown the brazen violence that Tatchell is subject to as his demonstrations are broken up, suffering attacks that he admits have left him permanently impaired.

This is perhaps the best defence for some of his more unpalatable actions. Partly inspired by the Civil Rights movements he witnessed growing up, he is a man acutely aware that you cannot get someone’s attention with a tap on the shoulder, and while his methods seem extreme, they meet the eras he has lived through. It’s easy to briefly scroll past the clip of Margaret Thatcher’s famous Section 28 speech and file that period under ‘A Different Time’. It’s quite something else to see that time brought back to life, and witness just how much Tatchell has fought against in over half a century of campaigning. The looks and actions of Russian police during the climatic Russia demonstration reinforce Fry’s belief that “angry fighters like Peter are as needed now as they’ve ever been”.

Hating Peter Tatchell clearly has a fondness for its subject, with even Dr. Carey acknowledging that he was “on the right side of history” in the film’s closing moments. It is also, however, a realistic look at just what it takes to make positive change in the world, from a man who has devoted his life to it.