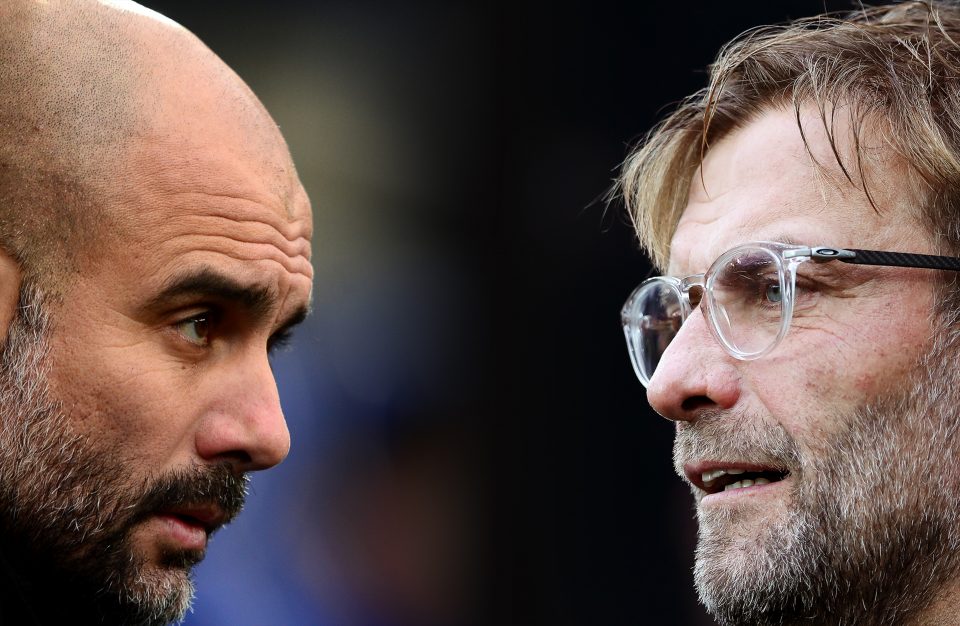 Given the unrelenting quality displayed last season by both Manchester City and Liverpool in the Premier League run-in, it seemed likely that head-to-head fixtures between the two would be equally significant in determining the destination of the title again this term.

Liverpool lost just once last campaign – at City on 3 January – as they finished second, and have only dropped two points from 11 games this season as Pep Guardiola’s prepare to visit Anfield on Sunday, hoping to inflict a similar blow on the Reds’ top-flight challenge.

As it stands, City are six points adrift of Liverpool in second place having suffered surprise defeats against Norwich and Wolves and, for the first time since Guardiola’s debut campaign, his team are not favourites to be crowned champions in May.

Read more: Red Star Belgrade 0-4 Tottenham: Spurs banish their demons with another rout of Serbian side

Domestic league titles have been the Spaniard’s speciality since entering management more than a decade ago. Only twice – in his first year at City and his last at Barcelona – has he failed to deliver that honour.

The threat to that record from Jurgen Klopp’s side has left the manager widely hailed as football’s coolest feeling the heat, however, and what was previously a rivalry characterised by mutual respect has all the ingredients to become one of the great managerial duels this time around.

Addressing Liverpool’s Sadio Mane-inspired comeback against Aston Villa last weekend, the City boss said it was not surprising “because [Mane] is a special talent. Sometimes he’s diving, sometimes he has this talent to score incredible goals in the last minute.”

And so the mind games began, a week out from this Sunday’s showdown.

Mane, who was booked against Villa for simulation, also won late and decisive penalties in Liverpool’s victories over Leicester and Tottenham last month.

“In the 94th minute it was against Leicester, it was a penalty and it was wow,” Guardiola said, as he attempted to backtrack on his remarks ahead of City’s midweek Champions League game with Atalanta.

“I am not too sure if I want to put oil on the fire. I am not interested in these kind of things. And I promise not to mention tactical fouls. That is maybe already too much.”

It is rare to see an unnerved Guardiola take a mischievous approach to press conferences more associated with Eddie Jones or Jose Mourinho, but his comments provoked a response from Klopp, despite the German’s apparent efforts to resist.

“I couldn’t really believe it to be honest and then I saw it,” the Liverpool manager said. “I am not too sure if I want to put oil on the fire. I am not interested in these kind of things. And I promise not to mention tactical fouls. That is maybe already too much.”

Klopp also took a swipe at Guardiola’s immediate knowledge of Liverpool’s match in the aftermath of Saturday’s games.

“When I came into the interview after the game [at Villa Park] I really had no clue what the other Premier League results were,” he added. “My brain is not big enough to think about another team as well. I have enough to do to think about us.”

City’s use of tactical fouls has been alleged by other managers including Mourinho, his Manchester United successor Ole Gunnar Solskjaer and West Ham’s former City boss Manuel Pellegrini, but Guardiola refused to discuss the topic when Klopp’s remarks were put to him.

“No comment on that. I don’t put oil on the fire,” he said, quoting his counterpart, despite fanning those very flames just days earlier.

The tetchy exchanges highlight the significance attached to this weekend’s game by both sides. Last season it was only in hindsight that the importance of the head-to-head fixtures became apparent, as both teams refused to drop points in the home stretch.

Previously unthreatened by Klopp’s Liverpool, there was a friendliness between the two akin to the latter years of the Premier League greatest managerial rivalry – that between Sir Alex Ferguson and Arsene Wenger.

Ferguson-Wenger mellowed in time, but the tension between Klopp and Guardiola has only risen and dates back to Liverpool’s Champions League quarter-final victory over City two seasons ago, when the Reds emerged as genuine adversaries.

Read more: Chelsea 4-4 Ajax: Fans get their money’s worth in relentless, epic clash at Stamford Bridge

While some rivalries can be characterised by opposing styles or personalities, however, Klopp and Guardiola are in many respects very similar.

Both are born winners and bad losers; lovers of the game in its purest and most entertaining forms but ready to do whatever it takes to win; animated on the touchline; eloquent in press conferences; and frequently on the edge of spontaneously combusting if rubbed up the wrong way.

The stage is set for City to take to Anfield in the biggest game of the season so far on Sunday. The bonfire has been burning all week and now it’s time for the fireworks.