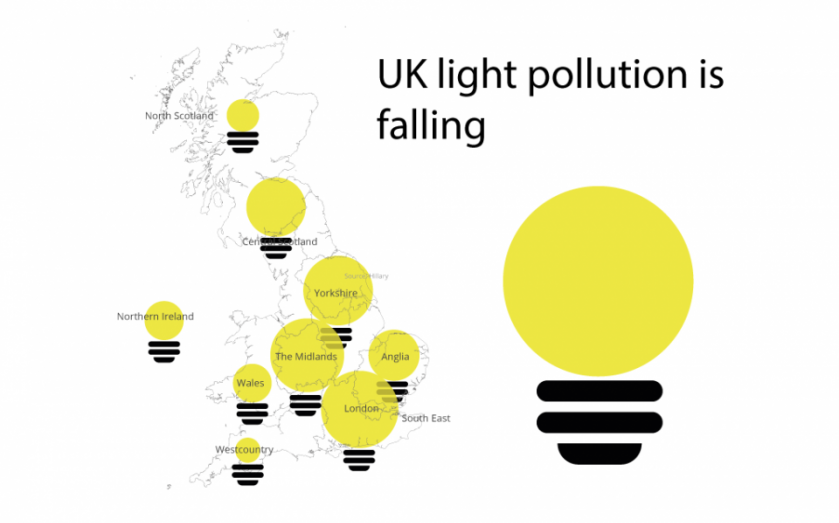 Good news for people who enjoyed last week’s eclipse: viewing the skies could get a whole lot easier in future. New research by blind maker Hillarys has revealed that light pollution in the UK has been reduced by 28 per cent since 1992.

In fact, light pollution in the UK peaked in 1993 and has been falling ever since. It will, the research suggests, continue to fall, and will have reduced by a further 21 per cent by 2025.

The infographic below shows how much light pollution each part of the UK gives out, and how much it has reduced since 1992.

Too much artificial light is bad for human health. We’re creatures of evolutionary habit, we like dark nights and light days and too much variation can mess with our hormone levels. As professor Martin Morgan Taylor, principal lecturer at De Montfort University and former vice-president of the International Dark Sky Association, says.

Whilst upwardly escaping light may be dropping due to better shielded lighting, it may still go sideways. We shouldn’t over light, and we especially need to keep bright lights out of our bedrooms, whether it’s an LED streetlight or bedside light. We need to angle lights carefully so as to avoid them shining into neighbour’s windows or the roadway dazzling road users.

Too much light pollution is bad for other reasons too, not least that it’s expensive and adds to carbon emissions.

Light pollution comes from several sources, but mainly from outdoor lighting such a street lights and electric lighting in houses.

The reductions, believes Sandeep Matharu, Hillary's Living Light campaign and sponsorship manager, could be down to better-designed outdoor lighting.

One possible conclusion is that ‘skyglow’ has reduced because we’re using better designed lighting that doesn’t create as much light pollution. Combined with local governments investing in better lighting this is having a positive effect all over the country.