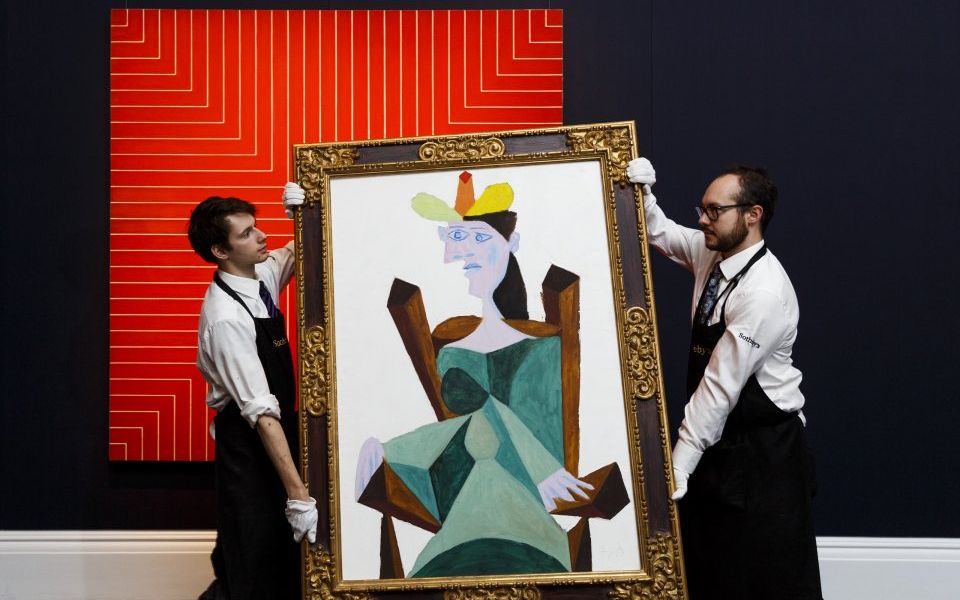 “Damien Hirst should run Lehman Brothers,” quipped an art collector after the artist’s outstanding auction the day after the investment bank’s collapse in September 2008.

While the famed artist may have faded from the news, the art market has proliferated for most of the decade since.

In these 10 years, those wanting to collect art, participate in the trade, or learn about the market have been treated to ever more information and guidance in this notoriously exclusive and opaque business.

Read more: As seen on TV: We get some tips on investing in film memorabilia

Sharpening those efforts, the Art Business Conference staged its fifth annual event last Tuesday in London, alongside those it holds in New York and now Shanghai. For those who missed it, the rival Art World Forum will be gathering at the Saatchi Gallery this Thursday.

We might well ask why the art market has burgeoned, how is it developing, and what may be its future.

The most significant appearance at the conference was an opening speech by a junior government minister for the arts, Michael Ellis.

Due to its relatively small scale, the art market has been mostly avoided by governments. After all, the official turnover of the entire international art market is less than any of the top five FTSE companies.

But the minister’s concerns with museum funding, art market integrity, art law, and technology suggest that art market regulation may be on the way, at least in the UK, where a sixth of all art and collectables are traded.

A key reason for government interest might be the recent growth in art investment. Propelled by art price records – last November the auction of a Leonardo painting for $450m shattered all records – the number of people buying for financial reasons rather than for aesthetic purposes has grown worldwide.

This is despite evidence that art generates inferior returns in the resale market to recognised investment assets. In recent years, the worldwide fine art auction price index, published by artprice.com, indicates that prices have fallen since January 2015, with signs of recovery in contemporary art.

However, the trade is blossoming at the less easily measured and lower priced primary market, where artists, collectors, dealers and critics try to make markets for new art. It is estimated that there are over 300 quality art fairs worldwide each year, compared to less than a hundred a few decades ago.

Clearly, not all art investors will be successful in their financial quest, but at least they can enjoy the emotional benefits of buying and displaying art in their homes.

The dark side of this would-be financial asset is its ease of use in money laundering and other criminal activities. During its 500-year recorded history, the art trade has frequently been associated with forgery, theft, and smuggling.

In our time, art has become a vehicle for tax evasion and avoidance, money laundering, and even cybercrime. The most noteworthy conference presentation concerned the EU’s forthcoming Fifth Anti Money Laundering Directive, which now encompasses all art market intermediaries, including freeports and art consultants, meaning they must report all cash transactions of £9,000 or more.

Elsewhere, growing efforts through education to explain and professionalise the market should help address its shortcomings, while promoting its unique virtues. However, for now the high cost of these courses precludes the less well-off from training and working in this elevated socio-economic environment.

At the conference, the need for better education was highlighted by a younger audience member suggesting that taxpayer-funded museums should not be managed in the way of X-Factor, whereby the public guided by a judging panel decides who wins, or in this case what is exhibited.

Technology has been a democratising force in the art market, particularly the availability of online price data since the late 1990s. That’s on top of technology’s role in the use of new materials and techniques; conservation, restoration and reproduction; analysis and marketing; display, digitisation and education; auctioneering; funding; authentication; and even neuroscience.

And lately, debates around the potential of blockchain have spread even into the art world.

The main applications appear to favour an authentication and provenance database, and as a means of improving market efficiency.

The conference seemed to conclude that a ledger of traded artworks would be helpful on the whole, especially internationally: confirming provenance, tagging objects, agreeing industry standards, all in a way that could not tampered with.

However, concerns remain about who would decide authenticity amid a fear of powerful art interests protected by their lawyers. As one moderator joked, “for blockchain to be effective in the art market, it would be like turning a chicken nugget back into a chicken”.

For now, the art market is some way from inclusive accessibility and transparency, unlike the much transformed investment banking industry that one of its foremost collectors deprecated at the height of the credit crunch. But transformation is on the way. The art world is heading into the future.