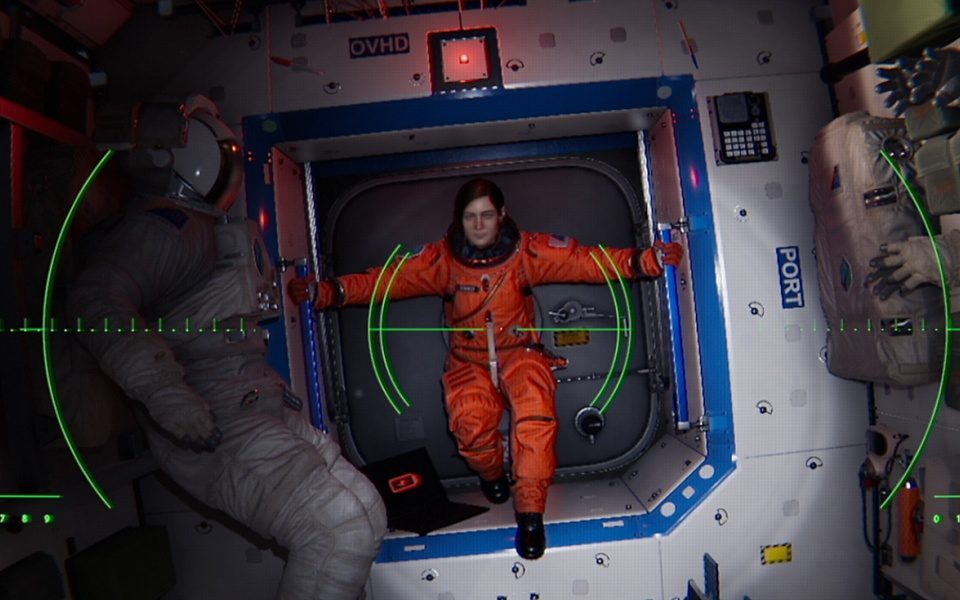 Observation is one hell of a proposition: a follow-up to the superlative indie horror game Stories Untold, set in a space station designed by alumni of Alien: Isolation, in which you control a rogue AI inspired by HAL from 2001.

And for the most part, it lives up to that promise. It begins with an unidentified disaster, which somehow results in a multinational space station, the Observation, diverting from its orbit above Earth to somewhere in the vicinity of Saturn. You, the onboard AI known by the acronym SAM, are woken – or rebooted – by the only known survivor, Emily Fisher; you’re her only chance of survival, which makes the message you just received – “BRING HER” – all the more chilling.

The space station itself is brilliantly realised, a series of modular corridors filled with unfathomable knobs and buttons and doodahs. You traverse the space using the archaic on-board CCTV system – all crunchy audio static and visual interference – your digital eyes panning the claustrophobic station with an oppressive mechanical whirr. You can flick between working cameras at will using a blueprint of the ship; later you take control of a small floating sphere to navigate the space in three dimensions.

You’re first tasked with restoring the station’s core functions, which involves completing a series of mini-games within the ship’s Nostromo-esque operating system: recalibrating modems and triangulating magnetic signals through tests of reflex, memory and spatial awareness. These are only mildly challenging but work in service to the sparse, low-fi aesthetic.

As you zip around, hacking into laptops and reading post-it notes, a conspiracy begins to solidify around you, just as the messages worming their way into your system become stranger and more obtrusive.

But while the art direction and story are strong, the minute-by-minute experience of bumbling around the Observation can be frustrating, sometimes painfully so. The game’s systems are deliberately obfuscated, a tangible reflection of your corrupted memory: this fine from a narrative point of view, but it means minutes at a time are spent clicking through menus searching for a prompt to advance the story. Navigating the station also becomes a chore, with tasks too often involving scouring a big space for a small object.

Still, the Observation is a singularly atmospheric place to float around, and the collection of sci-fi cliches explored eventually coagulate into something that delivers a genuinely powerful payload.

Heaven’s Vault is a love letter to language, a sci-fi odyssey in which the 3D environment is really just a backdrop to the strings of hieroglyphics you become increasingly adept at translating.

You play as Aliya, an intergalactic archeologist tasked with tracking down a missing academic. And while she’s a strong, independent woman who often finds herself raiding tombs, she likes to solve her problems not with a pistol, but with a note-pad.

It’s the latest title from Inkle, the Cambridge-based studio behind smash-hit text adventure 80 Days. Like that game, Heaven’s Vault juggles a mind-bogglingly complex set of branching narratives, giving you a huge amount of freedom to sail around its strange and beautiful pocket universe.

And “sail” is the correct term. It’s set in a distant galaxy far, far away – Star Wars is a pretty overt reference-point – where the dominant civilisation is built upon the ruins of a far more technologically advanced race. One throw-back to this long-dead culture is a series of mysterious interplanetary “rivers” that ebb and flow in never-ending circuits, shepherding Aliya across the cosmos.

Along the way she finds scraps of an ancient language, at first inscrutable but soon rewardingly decipherable, that hint at the history of the universe and of troubles to come.

The joy of discovery, however, is dulled by the increasingly mindless traversal from place to place, with minutes at a stretch spent bobbing along beautiful vistas that soon become forgettable wallpaper.

It’s a shame, because the way Heaven’s Vault encourages you to explore not in the hope of powerful items or gaining experience points but in a genuine quest for knowledge is a rare and beautiful thing.