The FTSE 100 index has just seen one of its quarterly changes with security firm G4S and real estate investment trust Segro promoted to the top 100.

Although perhaps small in themselves, these regular events have changed the face of the UK’s leading index since it was formed in 1984.

For the many investors whose savings are tied to the fortunes of this barometer of the stock market, these changes are crucial as they have fundamentally altered the risks and returns to which their investments are exposed.

The FTSE 100 now looks vastly different from the 1980s. Just 28 of the original 100 remain listed on the index. UK-focused businesses and conglomerates have been replaced by international juggernauts.

Unlike the US Dow Jones index, which has seen fewer changes over the past 100 years, the FTSE 100 has evolved to reflect the global economic revolution. This creates issues for investors to consider.

Through mergers, failures, promotions, demotions, new listings and globalisation the FTSE 100 has evolved to become a less UK-centric index and instead more closely reflecting the fortunes of the global economy.

To be fair, the index has never been a very good reflection of the UK economy – with key industries like motor manufacturing and technology either unrepresented or barely evident – but it has become even less of a bellwether for our leading industries.

The index bulged with household names, such as retailer MFI Furniture, Boots the pharmacy and grocer Tesco. These were businesses built to meet the demands of the UK consumer.

The index had a number of firms which bore the national name too: British Aerospace and British Petroleum to name but two.

For anyone looking to benefit from a burgeoning UK economy by investing in a stock market, the FTSE 100 was the first port of call.

However, times have changed.

Only 28 of the original 100 companies remain listed on the FTSE 100. Below, we have used the names they held in 1984 and referenced what they did. For some, the nature of their business has evolved.

The components of the index have changed dramatically over the past three decades, as we outline below. But the index has still offered decent performance throughout. Since 3 January 1984, the FTSE 100 has risen by 614%.

If you include dividends the return is even greater. A £1,000 sum would theoretically have grown to £9,158, adjusted for 2% inflation which is the government target inflation rate. Past performance, of course, is not a guide to the future and investors should also consider the effect of any charges. 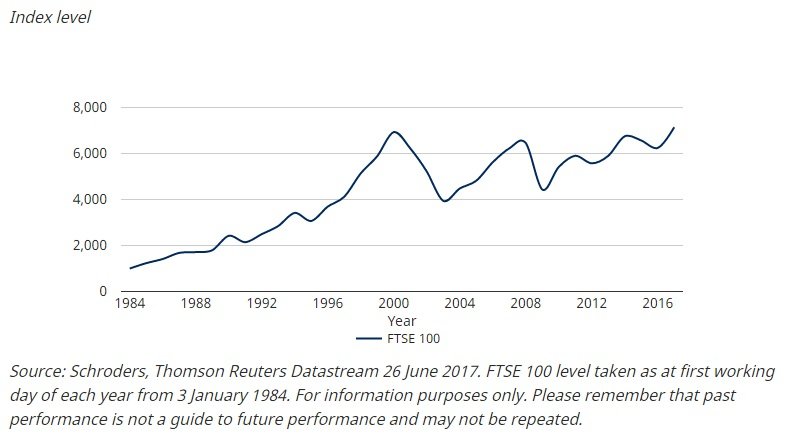 Another example is Allied Lyons. Back then it made a range of food and drinks including Lyons Maid ice lollies and Tetley beer. It began to experience problems in the late 1980s and merged with Domecq in 1994. It ceased trading in 2005 after being taken over by Pernod Ricard.

A recent example was Cadbury Schweppes, confectionery firm and maker of Dairy Milk chocolate bars. It was taken over by US food company Kraft for £11.5 billion in 2010.

Many have failed to survive in any form. MFI, which was founded as Mullard Furniture Industries in 1964, was relegated from the FTSE 100 soon after it was created. With an onslaught of rivals, such as Ikea, it finally closed down in December 2008.

Woolworths, pictured above, wasn't in the index at the start but was promoted soon after. As with MFI, it failed during the financial crisis with the last stores closing in early 2009.

Other original FTSE 100 members still exist but are no longer among the 100 biggest listed companies such as bookmaker Ladbrokes.

Here’s the list of companies no longer listed on the FTSE 100 in their original format. We cover some of the stories of those companies at the foot of this article:

The index is now stocked full of global companies such as HSBC, oil producer Royal Dutch Shell and drug maker GlaxoSmithKline, all of which generate huge sales overseas. This is important.

The inner ring in this chart shows that the vast majority of companies – 97% – are domiciled or based in the UK. But only 29% of revenues are made here.

A better reflection of the UK economy would be the FTSE 250. Companies listed on the 250 generate 55% of their revenues in the UK, according to data from Factset.

This matters for two reasons: investing in the FTSE 100 does not necessarily mean you’re investing in the UK, which is important to understand if you’re trying to build a balanced portfolio; it also leaves FTSE 100 investments at the mercy of currency swings. For example, a strong dollar can be good for UK companies that make their money in dollars. Once the dollar revenues are converted into local currency it would be worth more.

James Rainbow, Co-Head of Schroders’ UK Intermediary Business, said: “The make-up of the FTSE 100 has changed dramatically in the past three decades. It is part of a constant cycle of healthy change for the stock market. Companies are bought, merged, or simply decline and leave the top flight. Some even go bust. But meanwhile new companies, often in new industries, constantly emerge to take their place.

“The expertise of fund managers in building and adjusting portfolios can help amid this constant flux. And as we’ve highlighted here, there are other factors for investors to consider. Don’t think that investing in the FTSE 100 is an investment in the UK’s fortunes.”

FTSE 100 weightings – a change in leadership

As the index has evolved so too have the sectors which dominate it. We looked at the available data, going back to 2007. Over the last ten years, consumer staples and healthcare have made big gains in their makeup of the FTSE 100.

The financial sector, made up largely of banks, and energy stocks, including BP and Royal Dutch Shell, are still among the biggest components but their importance has waned over the last decade.

It is useful to understand the sectors weightings in the context of a wider portfolio. Holding a large amount of money in the UK, may mean an investor has a large exposure to commodity stocks and therefore may not want to invest heavily in commodity stocks elsewhere. 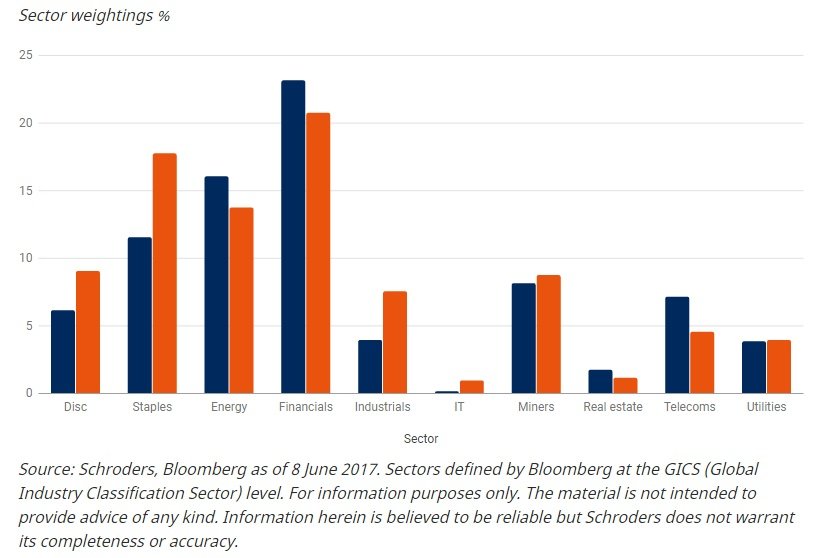 What is the FTSE quarterly review and why does it happen?

The FTSE continues to evolve with its constituents being reviewed every quarter. The index is changed to ensure it is a fair reflection of the current top 100 companies listed on the London Stock Exchange.

That sounds obvious but indexes such as the Dow Jones have made very few changes over their history, leading to accusations that it is out of touch and a poor reflection of real performance.

The FTSE 100 stocks of yesteryear

Here, we tell some of the stories of iconic companies that made up the FTSE 100 in 1984, but no longer exist today.

Hawker Siddeley was one of the most famous names in the aircraft industry. It is synonymous with the first and second world wars. Its founder, Tommy Sopwith, produced the Sopwith Camel which shot down Germany's World War one flying ace, the Red Baron. In the Second World War, its Hawker Hurricane played a crucial role in the Battle of Britain. More recently, it helped develop the Harrier jump-jet. The aerospace arm was taken into Bae in the 1970s. The remainder of the company was sold to BTR in 1992. BTR saw several mergers and today is now part of Schneider Electric of France.

It might seem strange now but renting electrical equipment was huge in the 1980s. Thorn EMIdominated the market through its ownership of rental firm Rumbelows and Radio Rentals. Thorn Electrical Industries began making lamps and lightbulbs in 1928 and went on to make televisions. In 1979 it merged with EMI, formed in 1931 as Electric and Musical Industries. Thorn EMI demerged in 1996 and by 1998 Thorn went into the hands of private equity and the brand disappeared. EMI, which was woven into British music culture through much of the 20th Century, was finally sold to Universal Music Group in 2012.

The demise of Rowntree Mackintosh as a listed entity was far quicker. Founded in York in 1864, the maker of Quality Street, Black Magic and Yorkie bars, dominated the shelves of sweet shops until the late 1980s. Its success attracted attention and by 1988 Rowntree Mackintosh was consumed by Nestle Confectionery for £2.55 billion.

Hanson Trust was a conglomerate created out of the former Wiles Group in 1964. It rose to prominence during the 1980s, boosted by the deregulation ushered in by Margaret Thatcher. It mounted a series of hard-fought takeover battles with major groups on both sides of the Atlantic, such as SCM, a US chemicals to typewriters business, and Imperial, a UK food to hotels conglomerate, which elicited claims of asset stripping. In its heyday it supplied electricity in the US and mined gold in Australia. You might have smoked its cigarettes, played with its golf clubs or seen its industrial cranes. It was one of the world’s largest companies and generated annual profits of over £1.5 billion. But by the late 1990s investors were beginning to lose confidence in conglomerates and the business demerged. It broke itself up into four separate companies: Hanson, Imperial Tobacco, The Energy Group and Millennium Chemicals.