Fancy a night out in North Greenwich? No, not that one with the market, the chapels, the observatory and the ship. The other one with the O2 Arena and… not much else. It’s a hard sell, truth be told, so imagine how much harder it must be to convince someone to live there.
Once a thriving naval port, it’s now a sterile stretch of land scattered with rusting gas holders. But in this age of unceasing regeneration, it was only a matter of time before its riverside location was polished up and sold off to the highest bidder.
“I think where the Peninsula has suffered for a long time is it’s a pretty ugly environment and it’s taken a long time to sort that out,” says Nick Parr, partner at estate agent Knight Frank. “The Dome’s had its ups and downs and it’s not really an amenity that can provide for a local community. I think the biggest change will be when the 24-hour Tube comes in, that will be fantastic. If you work in Canary Wharf and the trains stop at midnight, it’s actually a massive pain to get back to Greenwich at that time of night; it’s always been an issue that’s stopped professionals buying.”
But some of Britain’s biggest developers – Barratt, Taylor Wimpey, Weston Homes – are behind a raft of new housing developments that are due to complete within the next five years. The largest, Greenwich Peninsula, has Chinese developer Knight Dragon at the helm, with plans to deliver 10,000 new homes over the next 20 years.
“Trying to get British buyers to buy two or three years off plan is notoriously difficult,” adds Parr. “But you can’t take a short-term approach to regeneration, you have to understand that most of your value is going to appear in 10 years’ time.”
But the area is already sprucing itself up with critically-acclaimed restaurant Craft opening its doors and a host of pop-up arts events taking place on The Jetty throughout the year.
And soon, they’ll be literally shipping the new punters in as Barratt new development Enderby Wharf is also set to be home to London’s first international cruise liner terminal. Dropping off up to 1,000 passengers a day at the port, it will significantly boost visitor numbers to the area.
With new apartments going for around £600-£700psqft, it’s an affordable up-and-coming prospect that buyers from north and west London are starting to clock on to, says Graham Lawes, director of residential at Jones Lang Lasalle Greenwich. “The perception is that’s it’s better value, and the transport links into Canary Wharf and the City makes the daily commute a lot easier.
“It’s easy to see that North Greenwich has changed a lot and is becoming a popular, vibrant village in itself. This is driven by the younger set coming into the area looking to buy or rent somewhere that’s an easy commute to Canary Wharf.”
On the market this week
4 Alamaro lodge, SE10  £825,000 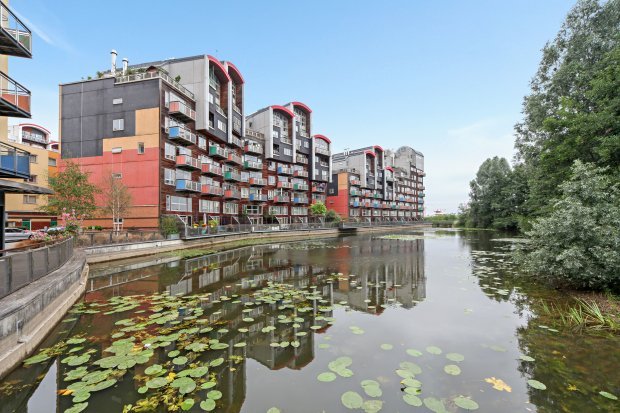 This three bedroom family home is set over two floors and boasts a kitchen/dining area that directly overlooks a lake. Part of the Greenwich Millennium Village development, it also has a full width terrace for entertaining guests in the summer and a master bedroom suite. Call JLL on 020 8712 6596 or visit jll.co.uk/residential.
Precision, SE10  From £290,000 for a one bedroom apartment

Situated on the historic Telegraph Works site, there’s 272 one, two and three bedroom apartments and duplexes for sale. The homes are spread across five buildings ranging from seven to 18 storeys high on a 1.2 acre piece of land. Contact developer Weston Homes on 01279 873 333 or visit weston-homes.com.
No.2 Upper Riverside, SE10  From £400,000

British designer Tom Dixon has been drafted in by developer Knight Dragon interior-design a collection of 35 studios, lofts and penthouses at Upper Riverside, which is part of its Greenwich Peninsula development. It’s also home to London’s highest residential swimming pool on the 15th floor. Visit greenwichpeninsula.co.uk.
Top five reasons to move to North Greenwich