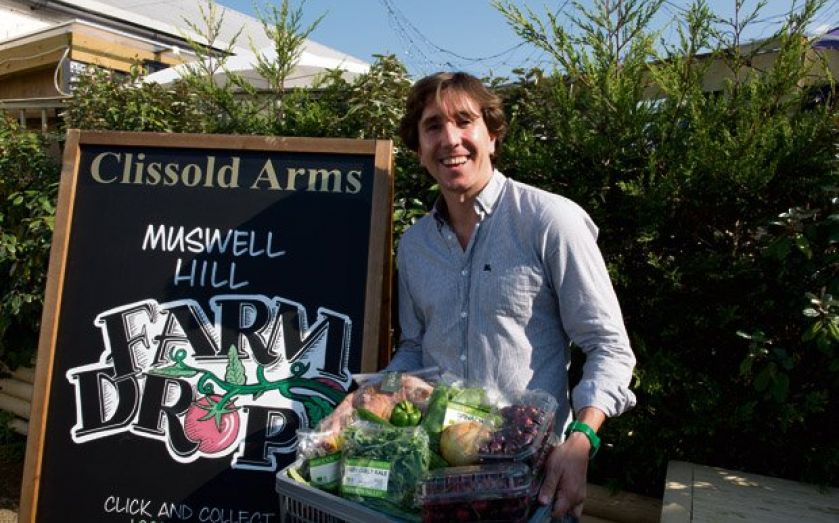 In the time it’s taken FarmDrop founder Ben Pugh to discuss his company with me, it crowdfunded £13,000. After just eight days on crowdfunding platform Crowdcube, FarmDrop raised more than its £400,000 investment target. A new way of doing food is, it seems, quite popular.
The FarmDrop concept is simple: it streamlines the food supply chain. In the UK, 80 per cent of food sales go through five retailers. Yet with the popularity of farmers’ markets increasing, it’s clear that consumers have a big appetite for buying direct from producers. Unfortunately, markets can be both expensive for customers, and an inefficient way of getting food into people’s homes. Pugh’s small company is on a mission to change this.
FarmDrop’s website puts farmers in direct touch with consumers. You order your food as you would your online supermarket shopping, and that order is sent immediately to the producer. Three days later, it’s delivered to a “hub” – a publicly-accessible place, and anything from a pub to a community centre. And at the hub sits a “keeper” – a human Amazon locker, if you like, who orchestrates the arrival and distribution of the food. With prices no more than a supermarket, the producer takes home 80 per cent, the keeper gets 10 per cent, and FarmDrop the other 10.

Pugh describes FarmDrop as his response to capitalism – a reinvention of a system he wholly buys into, but with a natural ethical strain, and enabled by modern technology. Arguably, it’s his background in equities – he’s a JP Morgan, Morgan Stanley and PwC alumnus – that has given him the insight to crack the gap in the market.
Until his Crowdcube campaign, he used his own money to fund FarmDrop, and contributed to the crowdfunding round with the rest of his team: “Everyone at FarmDrop has a massive ‘buy’ on the company. And when a user’s experience is so positive that they choose to become a shareholder in the business, that to me is good capitalism.”
His lightbulb moment came when he went out and spoke to producers. “They were all telling me the same thing. One well-known organic farm was selling butternut squashes to a supermarket in London for £1 each. They were selling them on for £3. That just felt like an inappropriate distribution of value.” A long-time advocate of crowdsourcing, collaborative consumption and disintermediation, he’s now doing all three: “It’s about efficiency – about giving everybody a better deal.”
The £400,000 investment will mean 60 FarmDrop hubs spread across the UK. At the moment, there are five, with each reaching 250 customers, but another 17 are ready to be switched on. The firm needs to hit a critical mass on the demand side: without enough buyers, it’s not worthwhile for producers. So by 2017, Pugh is aiming for 400 FarmDrops across the UK. He tells me enthusiastically: “If we got just 0.04 per cent of the grocery market, we could look for a valuation of around £80m.” But there’s little reason to believe he’ll stop there – at least, that’s the view of Asos co-founder Quentin Griffiths, who has backed the company, “Acquiring just 0.6 per cent of the UK grocery market would mean annual website revenues of around £1bn,” Griffiths has said. “And because they can offer both consumers and producers a better deal, I’d expect them to get there and beyond.”

But despite the exposure it’s getting, the early years (FarmDrop was founded in 2012) weren’t a walk in the park. It’s fortunate that it has a concept that resonates with many – localism, animal welfare and reversing the industrialisation of food. But learning the difference between the message and reality meant a hard landing for Pugh. Just last year he was “standing outside Kilburn Park Tube station, telling everybody who went past that this is an ethical way to buy food. It just didn’t work. We had the wrong range, the wrong price, the wrong format.” His own passion that FarmDrop is “the right thing” blinded him to what consumers wanted to hear: “I’d just got so carried away. I thought, ‘Everybody’s going to do it.’ It was complete nonsense. The way to get people to buy food is to tell them two very simple things: it’s a much better product, and it’s cheaper.” And now those are the two things FarmDrop can deliver.
Much of the business’s potential success lies in its capacity for organic growth: producers can also be consumers, producers and keepers can collaborate, and hubs can expand themselves. Already, the 31 producers using the platform (320 have signed up) are sharing the delivery of produce. FarmDrop’s challenge will be to keep up with and manage the growth it faces.
But Pugh is upbeat. “The UK is an amazing place to be an entrepreneur.” he says, citing EIS relief, which can significantly reduce downside risk for anyone setting up a business, or backing one. “If you’ve got a great idea, then go for it – you must,” he urges. “But only if you have that bloody-minded tenacity that you just will not give up, however hard it gets.” Getting FarmDrop off the ground has been “incredibly tough at times,” he admits. But there’s “always a flip-side”, and that’s when you start to get things right.