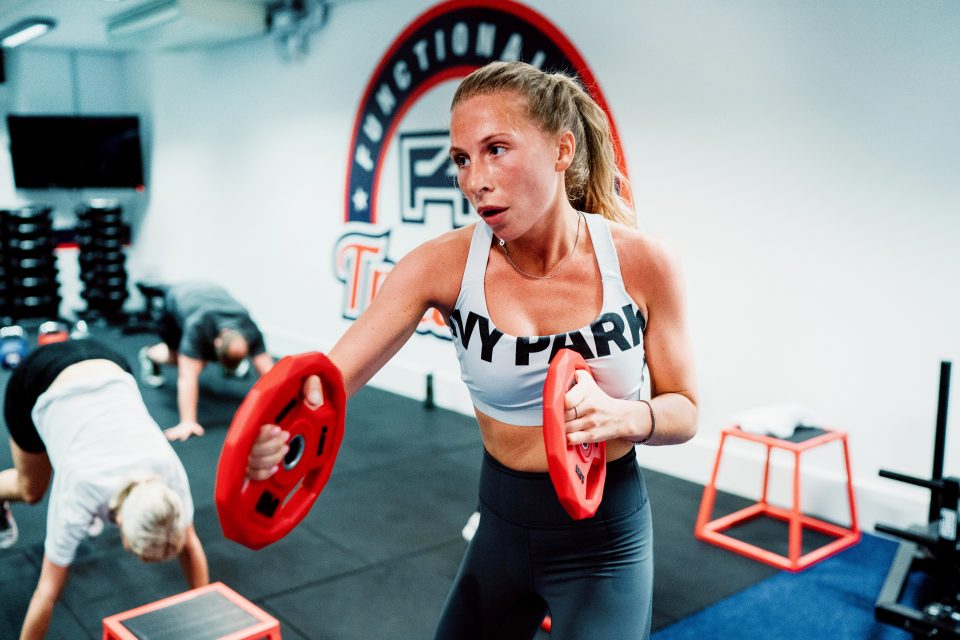 Fitness is a cut-throat business. Competition is intense: there are over 7,000 gyms in the UK, and the market is worth about £5bn. Around one in seven people are paying some form of gym fee.

Unsurprisingly, new fitness brands are popping up all the time to capitalise on the health and wellbeing trend. To stand out in this crowded field, innovative gyms are adopting the latest technology in order to take exercise into the global era.

One of the most successful of these – the fastest-growing chain in the world, in fact – is F45.

F45 (the “F” stands for functional) is a franchise business of boutique workout studios. For around £200 a month, gym members gain access to unlimited 45-minute classes which combine high-intensity interval training with exercise circuits.

Human instructors are present, but video screens around the studio also guide members through each exercise. Workouts are varied and the focus of classes changes every day, just to keep customers on their toes.

No pain, no gain

Fans of the brand boast about the sense of community that F45 generates – it has been described as having a “cult-like” appeal. That appeal seems to be working, as F45 has become something of a global phenomenon.

Since first opening in Sydney in 2011, the company now operates in 45 countries with a network of 1,750 studios. It first appeared here in early 2017, and by the end of 2018, it had opened 30 studios in the UK (including two in the heart of the City, in Leadenhall Market and Cannon Street). The plan is to have 100 UK franchises by 2020.

As a result, the brand is reportedly worth hundreds of millions of dollars, and it counts Hollywood actor and Transformers star Mark Wahlberg as one of its biggest fans – and investors.

“Mark loves it. I think he loves it more than me,” exclaims F45 co-founder Rob Deutsch.

“He’s an amazing ambassador, and he’s seen everything – he’s had every great personal trainer and been to every gym you can possibly imagine. So for him to give the tick of approval to the workouts is very rewarding for me and the team.”

The idea for opening F45 came when Deutsch – a former equities trader and keen sports fanatic who had played semi-professional cricket and rugby – believed that he’d spotted a gap in the health and fitness market.

“Commercial gyms were charging $5 a week, where all clients were getting was a rack of dumbbells and barbells. But the only people I could see getting results were those paying personal trainers $80 to $100 a session, so $300 a week,” he explains.

“That’s why I started at $45 a week, which sat in that sweet spot. I wanted to provide an environment where clients got tons of innovation, motivation, and results in their sessions.”

F45’s fees may seem steep compared to budget providers like Pure Gym, where a membership costs from just £15 a month. But with consumers placing an ever higher value on their fitness, Deutsch argues that boutique gyms offer something special and innovative.

“A decade ago, someone spending £60 a week on training may have sounded absurd, but now people substitute it for other things, like they’ll go out and drink one less night a week or not have an expensive dinner. The major shift has been people putting a far higher price on their health and the way that they feel.”

After opening around 30 franchises in Australia, F45 set up shop in America and London. From there, international expansion happened quickly, helped by Australian expats purchasing franchises overseas, as well as visitors to Oz experiencing the gyms themselves and deciding to launch franchises in their home countries.

And of course, social media has helped too.

“We’ve had amazing influencers and ambassadors with our brand, which has really helped us get that international exposure,” says Deutsch.

“Social media has been a massive driver for us, with people seeing the videos and snapshots of members having fun and doing innovative stuff. Facebook, Instagram and Snapchat are powerful marketing sources that you never could have dreamed of 20 years ago.”

One of the major things that sets F45 apart from other gyms is its use of technology. As well as the video screens dotted around each studio, members can download an app to track their heart rate during a class, and afterwards receive a PDF full of data showing when they were working hard, when they were taking it easy, and how many calories they burned.

Deutsch also outlines plans that will allow individual members to track their results and compete against people in other studios around the world. The idea is that this sense of competition will help keep members motivated to stick with their training. F45 has even developed an algorithm to develop future workouts.

“It took us two to three years with six trainers and a scientist to build this algorithm that’s far smarter than any human and builds better workouts,” Deutsch explains.

“We have 42 different workout programmes now. The algorithm spits out a workout that will get played out at different studios around the world. Those studios will then feed information back to the head office and critique it if there was anything wrong with it. There’s a lot of trialling, testing, and work that goes into every single workout.”

For competitive gym fanatics, being able to track their fitness achievements and compare them against anyone in the world is a strong incentive to keep going to F45 classes. This use of gamification principles – to turn exercise into a game – helps the brand retain members, and is a key part of Deutsch’s business strategy. But it still depends on having good workout programmes.

“The workout is the DNA of the company, that’s what people are there for,” he adds. “It’s amazing to have a strong sense of community, an incredible brand, and all the high flyers, but if you don’t have a great product, people are not coming back for more.”

Boutique studios are definitely priced at the higher end of the fitness market, but there’s also a clear demand for high-quality training from consumers who are placing more importance on their physical wellbeing.

F45 is innovating in this space by using high-tech solutions and gamification to keep people engaged with their training. But as the brand starts using artificial intelligence more to design workouts, it’s worth wondering: how long before robots replace personal trainers in our gyms?