When Tony Rowe sat down with Exeter chairman John Baxter in 1993 to discuss a £4,000 sponsorship deal, neither could have envisaged the success that was to follow.

Exeter were in English rugby’s fourth tier and struggling, but local businessman Rowe, owner of South West Communications, was sold by Baxter’s passion.

So began a 26-year relationship that has transformed the club’s fortunes, turning them into Premiership champions in 2017 – a feat they hope to take a step closer to repeating in this weekend’s play-off semi-final against Northampton.

“Apart from getting involved with sponsorship, I advised executives of the committee about what they needed to do commercially to start earning money,” Rowe tells City A.M. “They literally survived on about 200-300 people turning up on a Saturday and what they earned from the bar.”

With help from other sponsors that Rowe had rallied, Exeter climbed from the fourth division to the second in consecutive seasons between 1995 and 1997, but would finish last of the 12 sides in their first season there. They were only spared relegation by a change in rules that saw the league expand to 14 teams.

“I remember having a conversation with the executive committee in early ‘98 and said if they were serious about going forward with the club, they needed to form it into a limited company, get rid of the committee and make commercial changes,” the 69-year-old says. “They agreed to and I took over the running of the club.”

A former British powerboat champion and boat-engine company owner, Rowe took control of the club’s operations that year and has been chairman and chief executive since. His first appointment was director of rugby Ian Bremner, who helped establish the club in the second tier during an eight-year tenure. But all the while Exeter were building toward something bigger.

“The old County Ground was nothing to write home about,” says the Portsmouth-born boss. “We looked at developing the old stadium, but it wasn’t feasible, so we identified a site at Sandy Park Farm.”

The Chiefs decided to throw more money at their Premiership dream and moved to Sandy Park in 2006, as well going from semi-pro to full-time. 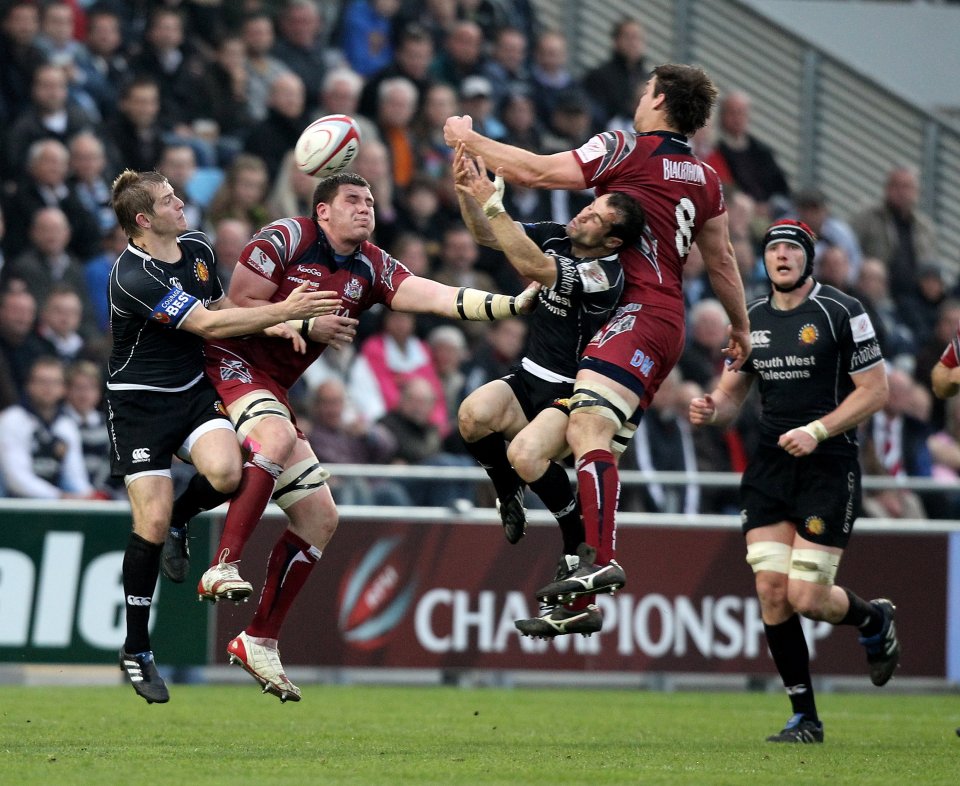 Exeter Chiefs beat Bristol Bears in a play-off in 2010 to reach the Premiership for the first time (Source: Getty)

Expanding the new ground has been done in a financially sustainable way, but in 2009-10 Rowe stepped up development, gambling on the club getting promoted that season based on the confidence of his new director of rugby Rob Baxter, son of former chairman John.

Rowe expanded Sandy Park to ensure it would meet the Premiership’s requirements, and under Baxter’s guidance they would beat Bristol in a play-off.

It was the realisation of a dream, but the next step was to maintain their Premiership status; an eighth place finish was something critics hadn’t envisaged.

“They didn’t take account of the fact everything we did since ‘98 was with the Premiership in mind,” says Rowe. “Our training regimes, going full-time, moving our ground – all stepping stones to make sure we had the ability off the pitch to sustain our position.”

On the field there has been a long-term strategy too. In 2000, the RFU started English academies at each Premiership club, but Rowe convinced the governing body to create the West of England Rugby Academy too, led by Exeter in collaboration with Cornish Pirates and Plymouth Albion.

It has since produced England internationals like Jack Nowell, Luke Cowan-Dickie, Henry Slade and Ben Moon, with around 60 per cent of the Chiefs’ squad made up of homegrown talent. 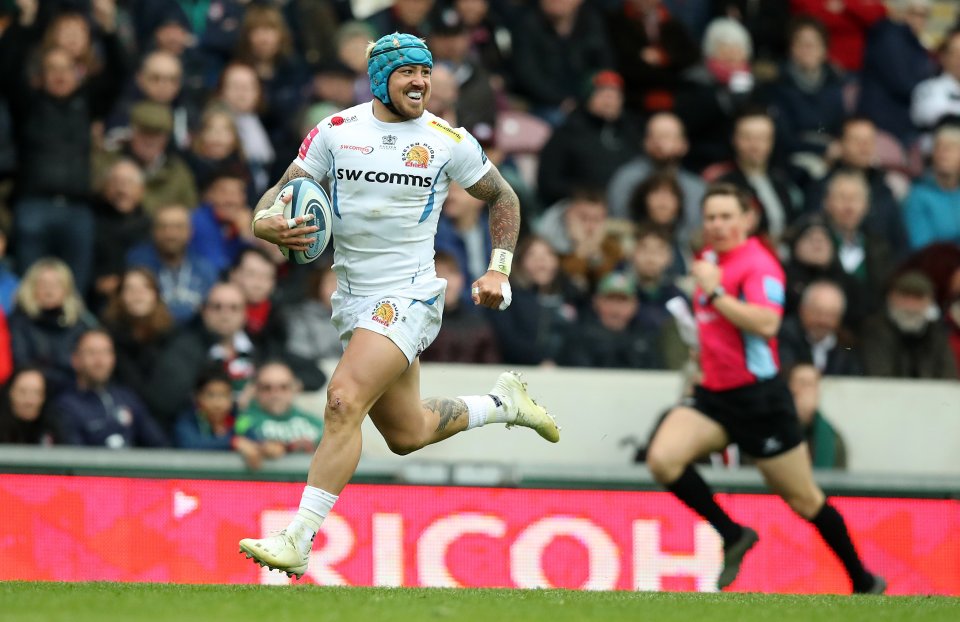 Jack Nowell is one of the graduates from the Exeter-led West of England academy (Source: Getty)

It’s a strategy that has helped to encourage local support while also reaping financial rewards; last season Exeter were the only Premiership side to make a profit.

“At the end of the day I’m a businessman and anybody that works with me will tell you that I always say: ‘If we aren’t going to make any money, why are we doing it?’.”

Similarly, Rowe is happy to see outside investment from CVC Capital Partners, which acquired a 27 per cent stake in Premiership Rugby and control of its commercial arm for £230m in December.

“Anyone investing £200m is reasonably certain they are going to earn some money,” he says. “The more they earn, the more we earn.”

Whether CVC push to scrap relegation remains to be seen, but Rowe believes the Premiership’s financial superiority has “financially ring-fenced” it anyway.

“Most Championship sides spend up to £3m on players and coaches,” he says. “We’re close to spending £9m on players alone. Today there’s a huge financial gulf.” 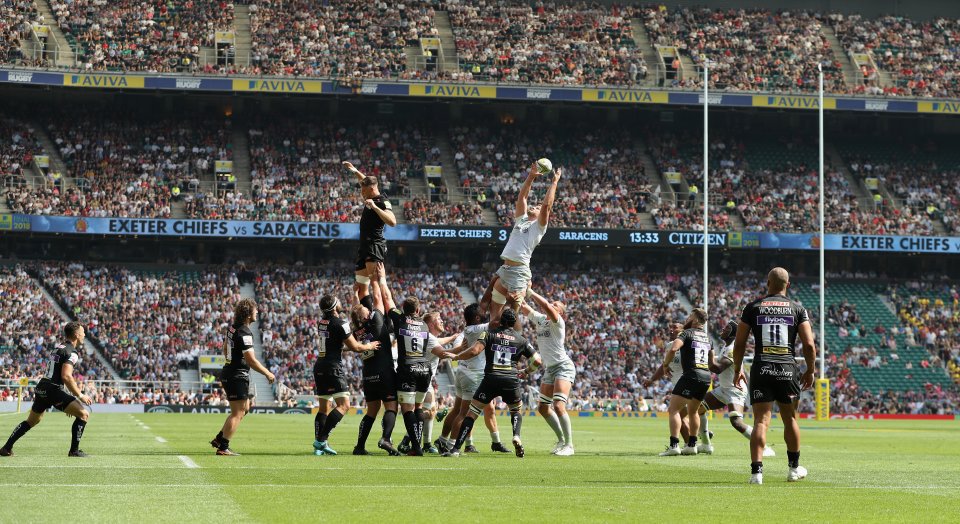 Saracens have beaten Exeter in the final at Twickenham twice in the last three years, including last season (Source: Getty)

Despite their commercial success, Exeter are not immune to the financial perils facing all Premiership clubs, with none earning enough “to have a big safety net”.

“Running a sports business is a bit like farming,” says Rowe in true West Country fashion. “When you put your seeds in the ground you haven’t got a clue what return for your crop you’re going to get.

“It’s the same with rugby. Take our game against Bath next January, we don’t know if we are going to have a capacity stadium or not.”

One thing that is certain, though, is that business is helped by good results, and having achieved more than they dreamed of in 1993, 1998 or even 2006, the club are determined to cement their position as a dominant force in English, and eventually European, rugby.

While Rowe does not have the answer for their European woes, he is confident his side will claim their second Premiership title on 1 June, quite possibly against the team that denied them in last year’s final.

“If I was allowed to bet, which I’m not, I’d put money on us. I would think on form it could well be Saracens and ourselves, and that would be interesting,” Rowe says. “I think it’s our turn to beat them at Twickenham now, isn’t it?”