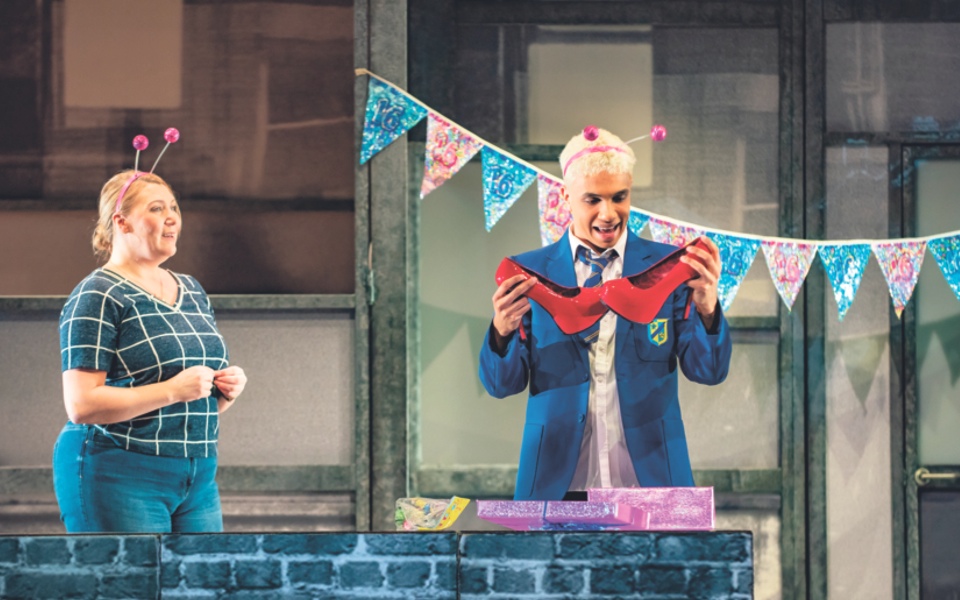 Popular musical Everybody’s Talking About Jamie is switching it up for 2020, with some major cast changes, including a new Jamie.

Based on the 2011 documentary Jamie: Drag Queen at 16, Everybody’s Talking About Jamie is an inspirational coming of age tale about a young man taking his first high-heeled steps into the fantastical world of drag, while facing a struggle for acceptance in his everyday life. It’s a modern-day kitchen sink drama, with song and dance numbers.

Since its arrival in the West End, in 2017, it’s become a reliable crowd-pleaser. Audiences revel in the triumph of creativity and authenticity over the stultifying effects of convention, and the more pernicious impact of bullying and physical repression. For many, especially members of the LGBTQ+ community, it reflects their own struggles, and offers hope, catharsis, and empowerment.

Jamie is already “out-out” in Sheffield, a fact that seems reassuringly uncontroversial to most of his Year 11 classmates. Unfortunately, he is targeted for harassment by the school bully, and when he tells the careers teacher that he wants to become a performer, she tells him to get real.

Jamie bucks against conformity, insisting that sometimes you’ve got to take life by the balls, then take those balls, tuck them between your legs, and put on a frock. When he stumbles into the local drag emporium, the proprietor, Hugo, becomes his fairy drag-mother; supplying Jamie with a dress and booking him his first performance at the local drag club.

The second act sees Jamie’s newfound confidence challenged by school authorities and his estranged father, but it inevitably ends with a high-kicking sing-a-long, and the entire audience up on their feet.

Noah Thomas, in his West End debut, gives a winning performance as Jamie, and Melissa Jacques provides emotional ballast as Margaret, his wonderfully supportive mum. Her song “He’s My Boy” is the heart – and vocal high-point – of the show. Their relationships with their respective best friends Pritti (Hiba Elchikhe) and Ray (Sejal Keshwala) make all four roles grounded, believable, and sympathetic. Roy Haylock brings vivacity and humour to the part of Hugo, while Bianca Del Rio – his drag alter-ego and winner of RuPaul’s Drag Race season 6 – glams it up as the world’s greatest drag queen, Loco Channel. But, with perfectly timed physical comedy, veteran pantomime dame Leon Craig snatches every scene, as the larger than life showgirl Sandra Bollock.

Everybody’s Talking About Jamie is not without its faults. Its story – though thoughtfully repackaged to focus on a previously underrepresented and marginalised community – is ultimately familiar, overly long and unevenly paced, and a preponderance of songs don’t quite find their mark. Nevertheless, charming performances, propulsive energy, the good will of the audience, and the emotional truth that lies at its core mean that the show is likely to bring in the punters for many years to come.