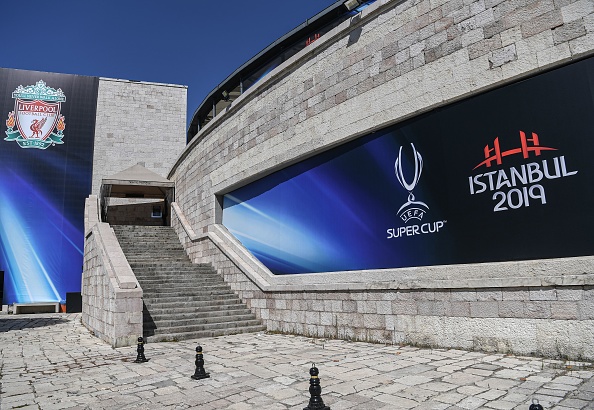 Tonight’s European Super Cup between Liverpool and Chelsea in Istanbul is a rarity in that the fixture does not feature a Spanish side for the first time since 2013.

In the last 10 years, all but one Super Cup has been claimed by either Barcelona, Real Madrid or Atletico Madrid, with four of the last five finals being all-Spanish affairs.

It would be fair to say that the trophy is held in high regard in Spain, who have 15 winners and 12 runners-up in the 43 editions since the competition debuted in 1973.

A break in that cycle of success will come from one of Liverpool or Chelsea tonight after they won all-Premier League finals of the Champions League and Europa League respectively.

It drew to an end a decade of Spain’s European dominance in which Real Madrid won four Champions League titles, including three in a row, and Sevilla won the Europa League in three successive seasons, among other Spanish victories.

But while clubs from Spain have derived a lot of success in the Super Cup, the trophy appears to hold less significance to teams from England.

Even Italy’s nine winners is more than the seven England have produced – a number aided by the success of Liverpool, Aston Villa and Nottingham Forest in the late 1970s and early 1980s.

In recent years, English teams have had even less success in the one-off match, losing the last four they have been involved in.

Chelsea suffered defeat at the hands of Atletico Madrid in 2012 and Bayern Munich in 2013, while Manchester United, who have only ever won the trophy once, in 1991, lost to Barcelona in 2017 and Lazio in 1999 following their famous treble.

The last English victory came in 2005 when Liverpool beat CSKA Moscow, and the Reds are – as they are in the European Cup – England’s most successful side, winning it in 2001 and 1977 as well.

Chelsea have won the competition once themselves, but not since 1998 when they overcame Real Madrid.

This evening one of Liverpool or Chelsea will add another title to their list of honours. But there are question marks over how much either side will prioritise it given the Premier League, where neither can afford to drop points, is now under way.

Chelsea come into the match on the back of a humbling 4-0 defeat to United, and life at Stamford Bridge could not have got off to a tougher start for Frank Lampard, who must galvanise his side for an even harder fixture, on paper at least, against Jurgen Klopp’s Champions League winners.

With a game against Leicester City this Sunday, and Chelsea needing to get off the mark domestically, this match could pose more of an inconvenience than anything, given the unparalleled demands of the modern Premier League.

It perhaps explains English sides’ relative lack of success in the competition. Spanish sides, on the other hand, tend to come into this game as one of, if not the, final match before La Liga kicks off, where Real Madrid and Barcelona are consistently superior to the majority of their rivals.

Read more: VAR could avoid £100m errors or ensure the right team wins the Premier League, its flaws are a small price to pay

It is a cliche that there are no easy games in the Premier League, but for Liverpool even a trip to Southampton this weekend has the capacity to pose problems.

Given they only lost one league match in the entirety of last season and still finished second, the importance of being at 100 per cent for each Premier League game is evidently paramount.

While tonight’s match will cap a successful 2018-19 campaign for the winner, both Klopp and Lampard will ultimately be focused on the new season and finishing as high up the Premier League table as possible.