Ethereum has started 2019 on strong form. Its native Ether cryptocurrency gained 10 per cent in the first week of January, and has doubled in value since bottoming out at $75 in mid-December. It has usurped Ripple to reclaim the latter’s title as the world’s second-largest cryptocurrency.

Traders are snapping up the currency ahead of next week’s hard fork, which will see the Constantinople update applied to the blockchain.

At the same time, Constantinople will delay the so-called ‘difficulty bomb’ – the process of gradually increasing the complexity of mining until it becomes unprofitable. This will help to keep the system stable and reduce the chances that a group of miner-led developers may try to hard-fork their own version of the blockchain to address the problem.

Amongst the changes due to be enacted are measures to reduce the rewards generated by mining Ethereum from ETH3 to ETH2. This will reduce the supply of new coins on the market, helping to push prices higher. This has pushed ETH up to test resistance at $150 recently, with support found at the $140 handle.

But constricting supply is only half of the issue; the other is demand. And 2018 was a year categorised by a lack of demand.

The biggest cryptocurrencies tumbled around 80 per cent from their late 2017/early 2018 peaks. Ethereum began last year trading around $1,400. Over the following twelve months, the crypto market was battered by high-profile thefts from exchanges, the threat of regulation, and the lack of progress made in entering mainstream markets. 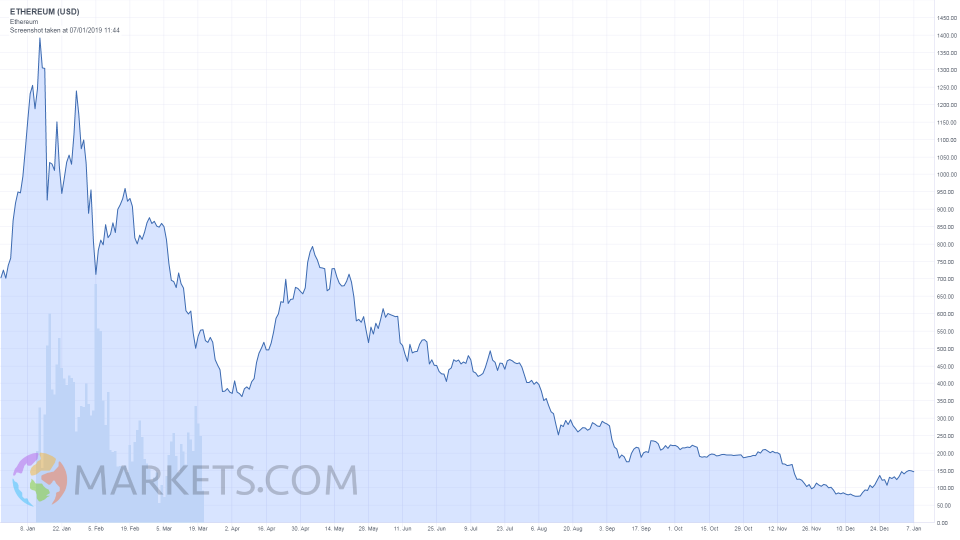 The long-term plan for Ethereum will include updates that increase transactions volumes to potentially over 1 million per second, but this remains some way away.

Bulls argue that the cryptocurrency market has crashed and recovered like this before. Bitcoin, which accounts for such a large portion of the market that it usually drags its peers wherever it goes, has experienced half a dozen such events. As a new asset, cryptocurrency is still undergoing a period of price discovery, and such cycles are to be expected, many claim.

In the case of Ethereum’s native currency, Ether, the latest appreciation is being fuelled by positive developments to the blockchain code, but it appears that, like its major cryptocurrency peers, the upside for ETH remains limited until the market makes significant process in overcoming at least one of the major obstacles it faces.