Down in the depths of the Cayman Islands 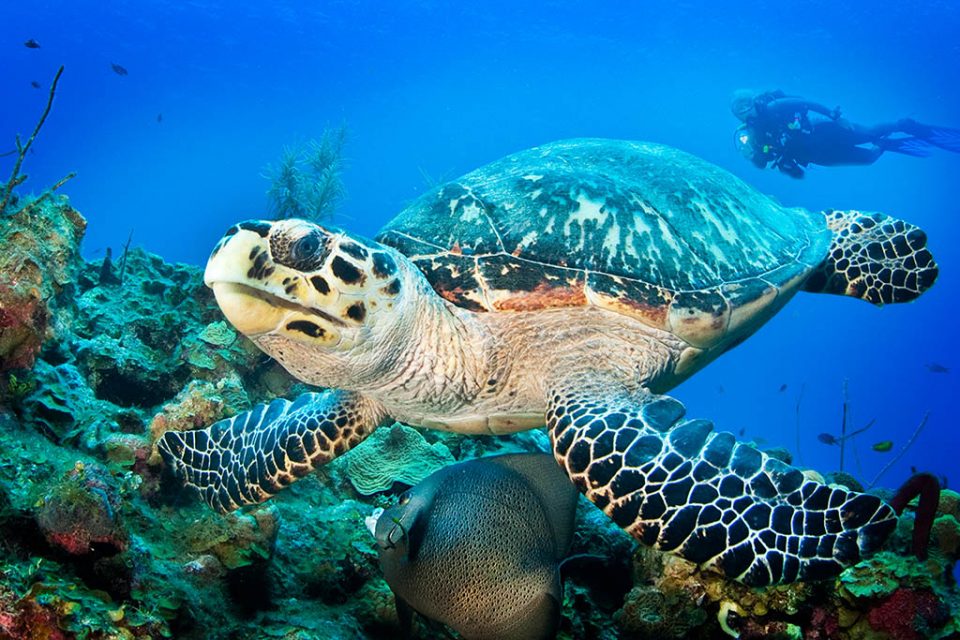 The Cayman Islands used to be a favourite destination for pirates, but now it’s scuba divers you’ll find lurking off the coast. In fact, Cayman is widely recognised as the birthplace of recreational diving in the Caribbean and, with its tranquil waters, 30+ metres of visibility and 365 different dive sites, it’s one of the best and most plentiful locations for it on the planet. Here you’ll discover abundant marine life, colourful reefs and sunken wrecks. Maybe you’ll even find some pirate doubloons on the sea bed.

With the Western Caribbean Sea’s year-round temperature of 28 degrees Celsius you needn’t bother with a wetsuit. All three islands – Grand Cayman, Cayman Brac and Little Cayman – offer bountiful diving opportunities and professional PADI-recognised divemasters and operators. Within easy reach is a world of spectacular wall drop offs, pristine coral reefs and interesting wrecks. The islands are, in fact, the summits of mountains which plunge thousands of metres to the ocean floor below.

As well as learn-to-dive courses for beginners aged eight and upwards, this is one of the world’s premier locations for advanced divers and underwater photographers. Bloody Bay Wall, in particular, draws sub aqua adventurers from around the globe. Off the north coast of Little Cayman, it’s been described as one of the Seven Underwater Wonders of the Diving World. The most breathtaking drop off in the Caribbean, it inspired James Cameron’s 1989 sunken submarine blockbuster The Abyss. The wall starts at a shallow depth of around 9m before falling away into a 600m vertical abyss. It demonstrates the enormity of the sea.

Horizontal forests of fan coral and neon-yellow tube sponges form a technicolour playground for trigger fish, eels, rays, and sharks. Even at 40m, among the groupers, visibility is extremely good and you’ll have no problem making out the exotic and rare marine life, much of which is unique to Cayman.

In addition to Bloody Bay Wall, other must-dos include Ghost Mountain, off Grand Cayman, which gets its name from the giant mushroom-shaped pinnacle that seems to appear out of nowhere as you swim up to it. The ‘mountain’ is teeming with life, from blood red finger sponges to schools of silvery fish. Advanced divers can visit the secret coral-covered cavern at around 30m.

The MV Captain Keith Tibbetts, sunk off Cayman Brac, is the only Soviet warship in the western hemisphere that is accessible to divers, which makes it an especially fascinating site to explore. From the USSR’s Red Fleet, the 1984 Koni-class frigate passed to the Cuban Navy and was bought by the Cayman Islands in 1996, renamed after a local politician and dive enthusiast, and scuttled to make a scuba site. Hurricane Ivan broke the 100m vessel in two back in 2004. The gun turrets make a fantastic photo-op if you have a waterproof camera, as do the resident goliath groupers Natasha and Boris.

And another military wreck which mustn’t be missed is the USS Kittiwake, off the west shore of Grand Cayman. Like the Keith Tibbetts, the US Navy ship was sunk on purpose to the delight of divers. Commissioned in 1946 as a submarine rescue vessel, it operated throughout the Cold War and, in 1986, recovered the black box from the space shuttle Challenger, which disastrously disintegrated above the Atlantic 73 seconds after lift-off. Now the Kittiwake’s mission is to form an artificial reef, and for wreck divers it’s an absolute paradise; clear warm sea, relatively shallow (20m) for perfect visibility. You can enter hatches on deck and plunge into the darkness; occasional shards of light bursting through portholes like searchlights. The ship is on its side and you can swim throughout all five levels of its 76.5m length, visiting the mess hall, propulsion room and hospital station and posing for underwater photos with the ship’s tiller.

Cayman’s dive industry is highly regulated and protection of the coral reefs is paramount. Divers can join research missions organised by the Central Caribbean Marine Institute (CCMI) in Little Cayman to learn about the reefs or join lionfish safaris to help control the numbers of this highly invasive species which threatens to destroy reef life.

Whatever your age, interest or ability, there’s something for every diver in the Cayman Islands, from starter courses and Kids Sea Camps through to advanced tuition and activities such as night diving and underwater photography. Almost all resorts offer scuba courses and most dive sites are just minutes from the shore.