Donald Trump's UK state visit: What the US President's itinerary looks like 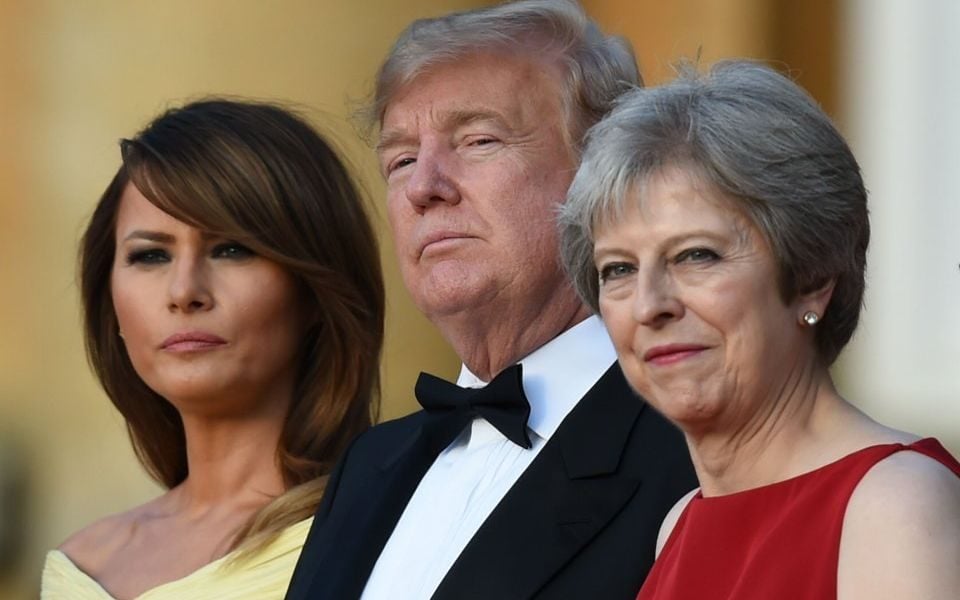 Over the next three days Trump will meet the Queen along with other royals including the Prince of Wales and Prince Harry, before a round of political talks with Prime Minister Theresa May and others.

What is a UK state visit?

While Trump’s UK state visit has been a long time coming, a state visit is only made by invitation from the Queen, on advice from the government.

While there is a huge focus on pomp and ceremony on a state visit, the government can also use these occasions to further national interests – a UK-US trade deal is regarded as a key focus this time around.

In general, state visits are rare – Trump is actually just the third US President to be invited to make one. Queen Elizabeth II normally receives up to two heads of state per year, and has hosted 112 such visits since the start of her reign.

What will happen on Trump's UK state visit?

Prime Minister Theresa May described Trump’s visit as being an “opportunity to strengthen our already close relationship in areas such as trade, investment, security and defence, and to discuss how we can build on these ties in the years ahead".

President Trump’s three-day trip to London will see him meet with May at Downing Street on Tuesday, and later join celebrations for the 75th anniversary of the D-Day landings, which will take place in Portsmouth on Wednesday.

Trump’s visit is set to lead to a mass protest in London currently planned for tomorrow. Demonstrations will focus initially on Trafalgar Square, very close to Buckingham Palace, before the 20ft Trump baby blimp will fly again above London.

Protesters won permission to fly the balloon again this year after its successful launch at last July’s demonstrations when Trump made a more informal visit to the UK.

President Donald Trump touched down in the UK on Air Force One on Monday to kick off his first official UK state visit.

Helicopters from US Marine Corps Sikorsky were ready and waiting at London Stansted airport for Trump’s arrival, when they will whisk the President and his entourage into central London.

Media preparation ahead of the arrival of #airforceone at London Stansted Airport. @POTUS @FLOTUS #BehindtheScenes pic.twitter.com/BRZW2riVdq

Air Force One’s arrival was expected to disrupt the arrival and departure of Ryanair and Easyjet flights.

Meanwhile, Transport for London (TfL) has closed roads to cars and cyclists within St James’s Park and Green Park until Tuesday evening to prepare for President Tump’s UK state visit.

What has Trump said ahead of his UK state visit?

In typical Trump style, the President has prefaced his arrival in the UK with a series of comments on UK politicians and famous faces even before his flight took off yesterday.

He said “I don’t think much of him” in reference to erstwhile critic London mayor Sadiq Khan, while praising Boris Johnson as being able to make an “excellent” Prime Minister.

Trump even tweeted criticism of Khan as he landed in London, saying the mayor "has been foolishly “nasty” to the visiting President of the United States, by far the most important ally of the United Kingdom. He is a stone cold loser who should focus on crime in London, not me……"

.@SadiqKhan, who by all accounts has done a terrible job as Mayor of London, has been foolishly “nasty” to the visiting President of the United States, by far the most important ally of the United Kingdom. He is a stone cold loser who should focus on crime in London, not me……

….Kahn reminds me very much of our very dumb and incompetent Mayor of NYC, de Blasio, who has also done a terrible job – only half his height. In any event, I look forward to being a great friend to the United Kingdom, and am looking very much forward to my visit. Landing now!

Trump has also denied calling Meghan Markle “nasty” in an interview with The Sun when he reacted to her comment made as an actress, when she said she would move to Canada if he won the US election.

Trump has said the trip “certainly will be very interesting”, adding that “there’s an opportunity for a very big trade deal at some point in the near future”.

He also tweeted: "I look forward to being a great friend to the United Kingdom, and am looking very much forward to my visit."

However, Trump’s previous trip was simply a "working visit", meaning that it didn’t have the official status of a state visit, which is the purpose of next week's trip.

Unlike a working visit, a state visit happens on the invitation of the Queen, making it a much bigger occasion.

What is Trump's itinerary for the UK state visit?

Trump and Melania arrived at London Stansted airport at 9am before helicopters took the President, his wife and their entourage into central London.

There, Trump is expected to travel to Buckingham Palace, where the President and First Lady will receive a ceremonial welcome from the Queen along with Prince Charles and the Duchess of Cornwall in the palace gardens at around 10am.

After Trump inspects his Guard of Honour, royal gun salutes will sound in Green Park and at the Tower of London in a 10-minute display.

Queen Elizabeth II will then host Trump and Melania for a private lunch at the palace before she gives them a tour of the palace's Picture Gallery around 1.30pm.

The Duke of York will this afternoon accompany Trump on a tour of Westminster Abbey, where Trump is expected to lay a wreath at the grave of The Unknown Warrior.

Prince Charles and Camilla will then host Trump for tea at Clarence House at 3.30pm before he joins the Queen at Buckingham Palace for a state banquet from 7pm.

This evening the Queen and Trump will make speeches to open the feast, though Labour leader Jeremy Corbyn has refused to attend.

Thousands of protesters are set to voice their anger at Trump and his politics at a Trafalgar Square rally tomorrow, with a Trump baby balloon due to fly over the capital.

FTSE 100 business leaders are set to attend a breakfast meeting with Trump and Prime Minister Theresa May at St James's Palace at 9am. Those expected to attend include Glaxosmithkline and Barclays' bosses.

Trump will subsequently visit 10 Downing Street for diplomatic talks with May before a joint lunch.

Trump and Melania will then host a dinner for Prince Charles and the Duchess of Cornwall at the US ambassador's home in Regents Park.

The Trumps will join the Queen and Prince Charles in visiting Portsmouth to commemorate the 75th anniversary of the D-Day landings.

More than 300 D-Day veterans and state dignitaries are due to be involved.

The BBC will broadcast the event live, which will feature music, testimonial readings and military displays including a fly-past of 25 aircraft – both those that graced the skies at the time of World War Two and current models.

President Donald Trump will then depart the UK and head to the Republic of Ireland to meet Irish Prime Minister Leo Varadkar.

Why are people protesting against Trump's UK state visit?

More than 50 Labour MPs signed a petition last month for Trump’s visit to be cancelled, citing his “misogynism, racism and xenophobia”.

However, a poll by Yougov of more than 2,000 people has shown that 46 per cent of Britons are in favour of Trump’s visit going ahead, as opposed to 40 per cent who are against it.

His visit last year prompted an estimated 250,000 protesters to turn up to voice their anger at the President and his policies. They even managed to fly a Trump baby balloon over London.

Protesters will meet up in Trafalgar Square on Tuesday, 4 June, from 11am.

The campaign group has stated on their website that the march will follow Trump’s itinerary and protesters will design their route accordingly.