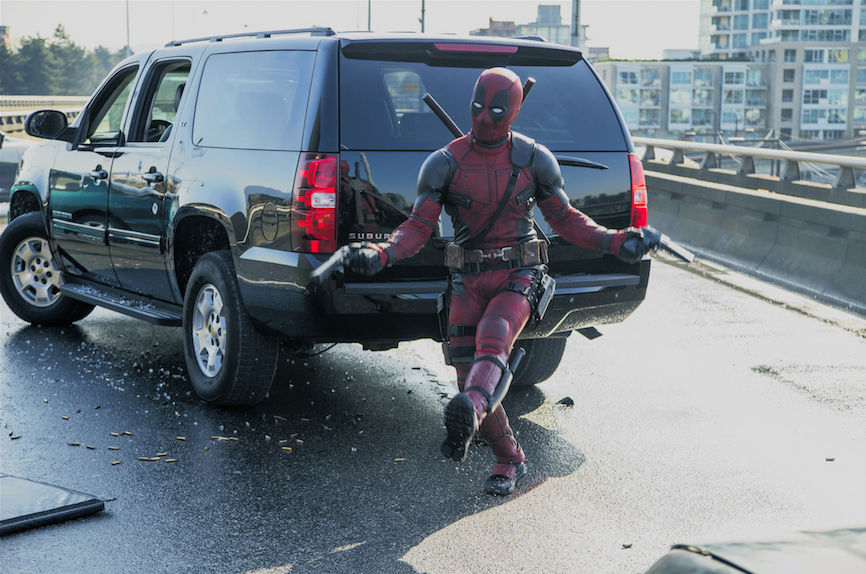 Deadpool was born out of the comic book nadir of the early 1990s, when super-hero books tended towards the morose and the self-indulgent. It was a time when muscles were big and boobs were bigger. Rob Liefeld's wise-cracking mercenary Deadpool, AKA Wade Wilson, was a breath of fresh air amidst the self-flagellation, somehow aware that he was a comic book character, often speaking through the “fourth wall” directly to readers. He also made jokes about bums and sex and bum-sex. The first issue of his debut series – X-Force – remains the second biggest-selling comic of all time.

Today’s super-hero movie industry is hardly in the parlous state of 90s comics but, for the first time since Bryan Singer’s original X-Men movie 16 years ago, the juggernaut shows signs of slowing. Marvel’s Ant-Man was a relative flop and the last Avengers movie was a noticeable step down from its predecessor. DC, meanwhile, has been unable to translate the success of Christopher Nolan’s Batman trilogy to its sullen Superman franchise, and the jury is still out on the upcoming Suicide Squad movie (between you and I, it looks bad).

So Deadpool once again has a chance to reinvigorate a genre. Which he does. And he doesn’t. Director Tim Miller’s movie is a lot of fun, filled with jokes about pop culture – and bums – that will make adult men and women laugh. It’s irreverent and slick, with one of the best slo-mo fight sequences of any superhero movie. The 15 rating allows Miller to ramp up the cartoon violence, with limbs and gore flying gleefully across the screen. There’s even a sex scene, although it seems to exist solely to remind everyone that this is a movie for grown-ups.

But there’s a but. Deadpool is also inexplicably tame, doggedly adhering to the very tropes it promises to subvert. The opening credits shirk the actors’ names in favour of a list of comic-movie cliches: “A Hot Chick”, “A British Villain”. It’s funny because we’re painfully aware of these lazy, recurring character types; flagging them up suggests they’re about to be subverted. But they’re not: Wade Wilson’s girlfriend really is a two-dimensional Hot Chick, despite a half-hearted attempt to toughen her up. She’s bait, kidnapped and tortured for the sole purpose of engaging the real, male, hero. The same goes for the villain who, if he were any less fleshed out, would be a skeleton.

The logic seems to be that Deadpool himself is the selling point and everything else is just filler. But that doesn’t explain the weepy origin story – that most hackneyed of super-tropes – in which Wilson attempts to cure his terminal cancer by taking part in a back-room experimental treatment, giving him extraordinary powers but leaving him horribly disfigured. Nor does it excuse the by-the-numbers revenge plot, in which Wilson tracks down the man who messed up his face.

This all leaves a lot of weight for Ryan Reynolds to carry – and he does. The script is as sharp as it is obnoxious and his presentation is spot on – even the most puerile gags are delivered with enough charisma that they rarely fall flat (an ill-conceived skit at the expense of a blind woman being the exception). But what could have been the character's greatest comic strength – his habit of smashing down the fourth-wall – is used far too sparingly. This seems absurd given that some of the funniest moments are when Deadpool steps out of the movie universe and into our own (when X-Man Colossus – an excellent choice as the po-faced straight man – threatens to take Deadpool to see Professor Xavier, for example, he replies: “Which one, McAvoy or Stewart?”).

​Deadpool may be the funniest, freshest super-hero outing in years, but it still feels like a missed opportunity. I guess I'll have to wait until someone commissions a She-Hulk movie to really get my post-modern rocks off.