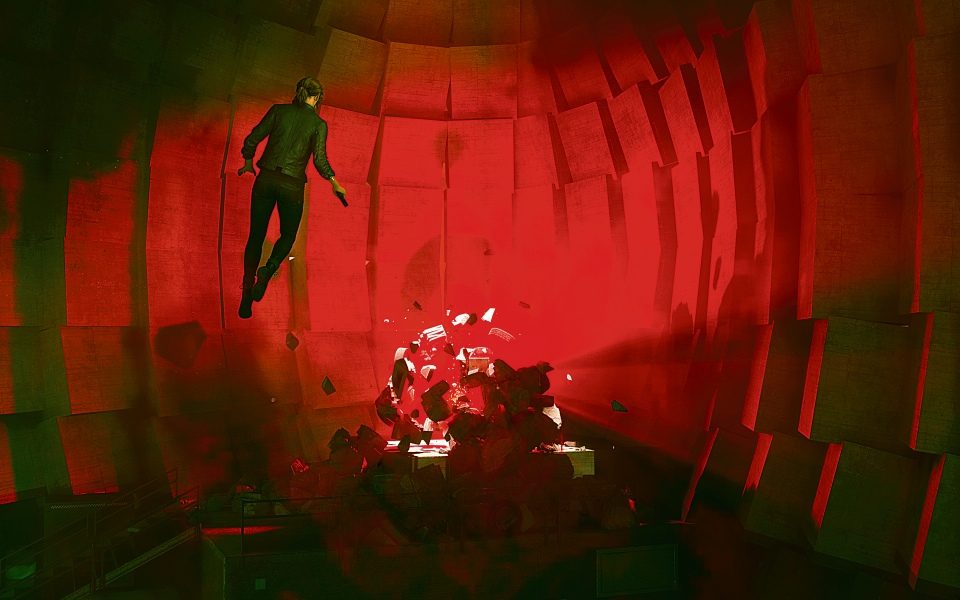 When David Lynch and Mark Frost came up with the pitch for Twin Peaks, they ignored the prevailing wisdom for creating a TV show.

First they mapped out the town itself – the sheriff’s station, the high school, the woods – then they imagined the kind of people who might live there. The murder mystery at the heart of the drama came much later; Laura Palmer and Agent Dale Cooper were an afterthought in the Twin Peaks origin story.

Finnish games developer Remedy – noted fans of Lynch – took a similar approach with Control. First they dreamt up the architecturally impossible home of the Federal Bureau of Control, a surreal, sentient brutalist building able to reconfigure its vast interior spaces at will, and everything else came later.

And boy does it show: the Oldest House, as the building is known, is a fascinating place, a logic-defying labyrinth that functions as both a voyeuristic insight into the minutiae of office life, and an ever-changing playground. It’s what Fox Mulder’s X-Files basement would look like if it occupied the entirety of the Pentagon. Whether you’re walking its (sometimes literally) endless grey corridors or poking around luxuriously carpeted offices, it’s captivating.

Your arrival at this bizarre heap of poured concrete is straight from an anxiety dream. You – the “you” being a young woman called Jesse Faden, well acted by Courtney Hope – turn up at a deserted government office in search of your long-lost brother. You stumble across the corpse of the bureau’s director. Then, in a moment of dream-logic sleight of hand, you’re the director; even the portraits of the previous incumbent have changed to your besuited image.

You don’t have time to work out the details, because there’s a reality crisis underway. A collection of Objects of Power – kitsch, everyday items that somehow manipulate our collective unconscious to channel inter-dimensional forces – are causing havoc, driving people mad and messing with the building’s already strained feng shui. There’s a refrigerator that gets angry unless someone is watching it, a fairground hammer that causes leprosy, a rotary phone that connects to another dimension.

Some objects demand rituals to engage with them – Jungian psychology is a big influence – such as a light switch that requires an OCD-inspired triple-click to transport you across the building via a strange roadside motel. It’s all very Twilight Zone, a pulpy yarn filled with deliciously nostalgic Americana (although Control lacks the neat resolution that makes those sci-fi shorts so satisfying).

Your first task is to find out what happened to the building’s staff, many of whom are dangling in mid-air chanting some hive-mind mumbo jumbo (the audio design is excellent, creating a rich soundscape that’s every bit as engrossing as the visuals).

Occasionally these possessed employees will spring to life, forcing you to dispatch them using a range of powers acquired from the astral plane; telekinesis, mind control, levitation. These are supplemented by your Service Weapon, a one-stop firepower shop that transforms from uzi to shotgun to grenade launcher. You soon settle into a compelling rhythm, oscillating between flinging swivel chairs with your mind and blasting things with your gun. At their best, fight sequences are symphonic arrangements of destructible scenery and next-level particle effects, although they do suffer from diminishing returns as the hours tick by.

Other times Control can be incredibly frustrating. Navigating the winding corridors of the Oldest House is often bewildering, something made worse by a largely useless map – frantically dashing around with no idea where you are or where you’re going may be thematically sound but it’s not very fun. Some of the missions, meanwhile, are uninspired, involving anachronistic McGuffins like repairing generators and unclogging pipes to open up new Metroidvania-style pathways.

Remedy’s previous games are what you might call glorious failures, especially Quantum Break, which clumsily smashed together an action game with a Netflix box set, including protracted video sequences that tried – and failed – to ape prestige TV. The studio has clearly learned its lessons, with FMV used more sparingly and effectively – the retro videos that play on various projector screens and cathode-ray TV sets in the Oldest House are wonderfully creepy and excellently directed. Other neat cinematic touches include stylish, block capital title cards introducing new areas, which wouldn’t look out of place in a Tarantino movie.

Control feels like a perfection of the Remedy formula. It takes fewer risks in form and structure than Quantum Break or Alan Wake – for all its thematic weirdness, it’s a relatively conventional game – and it’s all the better for it. What elevates it from fascinating curio to must-play title, though, is that sombre, brilliant brutalist building, some areas of which will be held up as high-points in level design for years to come.

Notwithstanding some mind-blowing set-pieces that I won’t spoil, it’s a place filled with little pockets of wonder. A case in point: one of the highlights of my gaming year so far was walking into a room filled with bristling, sentient post-it notes. If that’s not enough to sell you on Control, I don’t know what is.