Composer Nitin Sawhney opens up about the dystopia inspired by his father's death, Brexit and Schrodinger's Cat 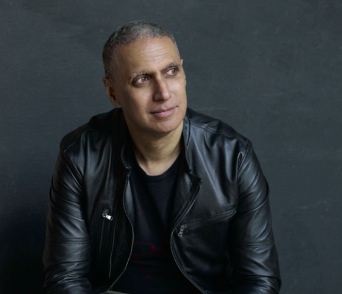 Nitin Sawhney is difficult to pin down. He’s best known as a contemporary classical composer, but he’s also an impressive musician in his own right, playing the piano, classical and flamenco guitar, tabla and sitar. He’s written countless scores for films, TV and video games, as well as stand-alone studio albums; he received the Ivor Novello Award for Lifetime Achievement last year.

He’s written words, too, notably for hit sitcom Goodness Gracious Me, which he also starred in alongside Meera Syal. The programme grew out of a comedy sketch show he created for BBC radio with university friend Sanjeev Bhaskar. Then there’s the work he’s done curating international festivals, his ongoing role as associate artist for Sadler’s Wells… Is there anything he can’t do?

“I’d like to direct a film,” he says, adding that music is his “passport” into all sorts of creative fields. His most recent project has taken a darker turn. Dystopian Dream, Sawhney’s 10th studio album, was written in the months following the death of a parent. While forced to imagine a world without his father, he came to a dark conclusion. “If you ask me what a dystopia is, I think we’re in one – a world led by people who normalise bullshit. We’re moving towards an unpalatable world. The things I see and read are disgusting… You feel like you can’t trust any of the people you’re supposed to trust.”

Sawhney can usually be found at work in his rather ramshackle studio in Brixton among a tight community of creatives at the end of a cul-de-sac. Sawhney’s place is the picture of organised chaos; wires snake over the floor, instruments from various cultures line the walls and a Gollum doll hangs from the coat-stand, perhaps a gift from long-time friend Andy Serkis.

Sawhney himself is late, but very apologetically so, complaining about last minute Uber cancellations. We scavenge some stools in his rehearsal room and get down to it. Hunched over, with his hands lightly drumming the seat between his legs, he speaks pensively about his almost synesthesiac ability to visualise music. His bereavement and the album addressing it sparked such a visceral reaction that he began to talk about staging it as soon as it was released. “When my dad died, there was a whole stream of images that came into my mind. I was there when he was passing away, and I imagined his soul falling through different universes, before ending up where he needed to be. I was looking at each of those universes and they became a series of vignettes.”

Each song, often using guest singers such as Joss Stone and rapper Akala, represents themes: loss, isolation, confusion, frustration. Sawhney took the project to Sadler’s Wells, who brought in contemporary dance duo Honji Wang and Sébastien Ramirez. He then set to work creating a video reel that conveyed a sense of his grief, ranging from Betty Boop animations to a scene from Fritz Lang’s Metropolis.

The result was a four song taster at the Royal Albert Hall in 2015, followed by a full stage realisation of all 15 songs, set to be performed at Sadler’s Wells on 27 and 28 November. Originally Sawhney was going to star in it, but withdrew in favour of Eva Stone, who sings on two tracks on the studio recording. He says he felt like a distraction, and Stone also happens to be a trained dancer: “At one point she’s got Honji on her back and she’s still singing.”

Sawhney’s more recent work isn’t only personal – it’s a reaction to the times in which we live, a call for collectivism in an age of division. “As an artist, you have an obligation to interact with society to give you a sense of context. I get frustrated when I see artists pray at the shrine of themselves – music is a universal language about expressing your feelings about everything, including society.”

Never one to shy away from politics, much of Sawhney’s work has explored the nature of multiculturalism and spirituality, and Dystopian Dream is no different. Even more forthright is a satirical national anthem he’s writing for a Brexit Day concert at the Barbican, which will be broadcast on 29 March 2019 on Sky Arts. “I think it’s going to be a cathartic take on what’s going on in the country right now,” he says, but remains tight-lipped on the details.

Next year will also see the release of Mowgli, a live action remake of The Jungle Book that’s been snapped up by Netflix. At the helm is Andy Serkis, a friend since they worked together on video game Heavenly Sword in 2007. Composing music for a visual medium is a dream set up for Sawhney, who has scored over 50 films, but he says there are people in the classical music world who are less than impressed. “Shostakovich was a film composer and people look down on him in some ways because of that. If you look at Schonberg, he said he would only have his music put to a film that was made for his music. Bernard Herrmann was one of the masters of film composition working with Hitchcock, but at the same time, he said his ambition was to be an orchestral conductor,” he says. “There’s a weird kind of snobbery, but I think film composition is a very high art form indeed. You have to understand literature, how to use music as a language, and the dramatic arc that comes from musical expression.”

This adherence to musical tradition was in full swing a few years ago when Sawhney composed a piece for the Royal Opera House that played with complex philosophical ideas such as the paradox of Schrödinger’s Cat. In his version, instead of a cat in a box, the conundrum was posed by a woman with a pregnancy test. “It was about the idea that her life was split into different versions of herself, which then converged. There were lots of different languages in it, too; I saw a journalist taking notes and he’d just written ‘world music.’ You see this attitude a lot – just because there are people from different backgrounds, it must be a category of its own. They were all from London! I even stuck to the structure of three arias!”

Sawhney says he’s spoken to other artists who are put off entering the classical sphere because “opera buffs just can’t let go of their perception of tradition”. The dreaded T-word, he says, is anathema to creativity, and to classical music. “We’re seeing a harking back to the days of Empire when we should be letting go of the past and embracing where we’re at now. We should be thinking more carefully and compassionately about human beings as a whole, not being parochial in our understanding of the world.”

Not unlike Schrödinger’s Cat, Sawhney is is a paradox, at once inside and out of the classical and contemporary genres, straddling several mediums that most artists can only dream of mastering.