Last year, Paul Whitehouse appeared alongside his lifelong friend Bob Mortimer in Gone Fishing, a BBC Two show in which the comedians travelled the riverbanks of the UK in search of rare species of fish.

In contrast to an increasingly bleak news cycle, it was relentlessly genial television, uncomplicated, familiar, cheerful and good-natured. Both men had recently undergone surgery for heart conditions, and watching them cast off and chat about fishing lures, triple bypasses and scotch eggs was something approaching meditation.

“We can’t quite comprehend why it’s become so popular,” Whitehouse tells me, at the studio where he’s rehearsing his role in the West End musical version of Only Fools and Horses. He’s thin, smiley and bright-eyed, and punctuates his speech with small bursts of infectious laughter. “People seem to get something from watching us fish. A sense of calmness. The programme comes from a very genuine place. It’s not a contrivance, what you see is exactly how it happens in real life.”

One of the greatest character comedians of a generation, Whitehouse is an on-screen chameleon best known for the slate of characters he played on the classic sketch comedy series The Fast Show, which he created with his longtime writing partner Charlie Higson. Like very few have managed before or since, the catchphrases he and Higson coined have left an indelible mark on the national psyche. Decades on, the refrain of “suits you sir” can still be heard in Moss Bros fitting rooms up and down the land. 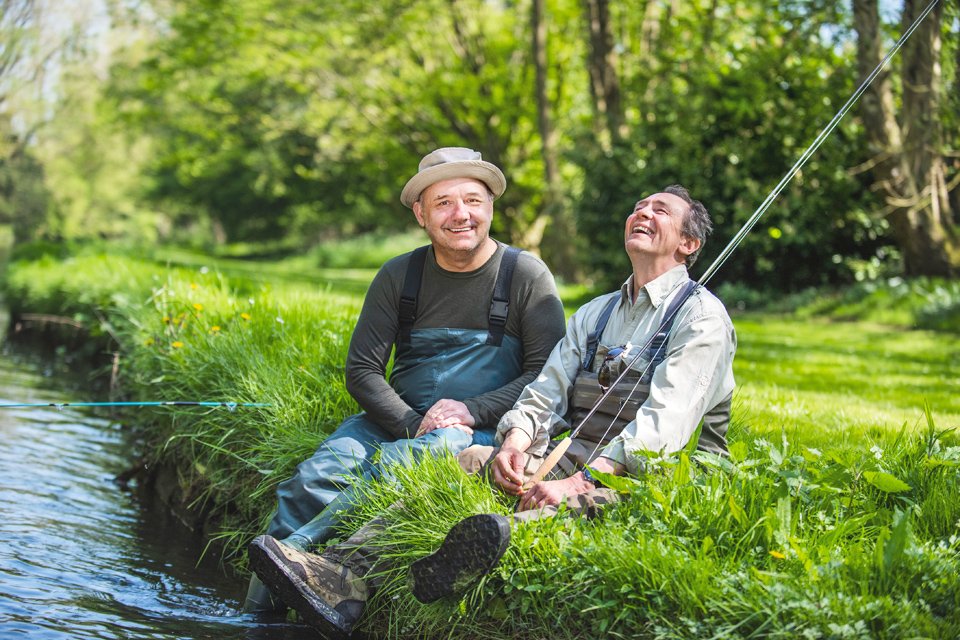 His first collaboration with Bob Mortimer was when he and Higson wrote for and performed in Vic Reeves Big Night Out, a gig they landed shortly after the career-launching success of Harry Enfield’s Stavros and Loadsamoney characters, who appeared on the variety show Saturday Live in the late ‘80s. “Loadsamoney did so much for me and Charlie,” says Whitehouse. “Suddenly it was like ‘oh these two idiots that Harry knows, they aren’t entirely stupid’.”

The comedian went on to write and star alongside Harry Enfield in Harry Enfield & Chums, and later Harry & Paul, along the way accruing a small pile of BAFTAs for his trouble. But in his languorous fishing show, lurking in the reeds with his bait bag and rod, Whitehouse finally does away with the wigs and prosthetic noses. He’s unembellished and unguarded for the first time.

“I’ve been asked to do fishing programmes for years and I’ve always resisted, because it’s my time away from all the nonsense. My dad taught me how to fish when I was five years old, and I do sometimes wonder,” Whitehouse adopts a mock-dramatic tone. “Did I do it to please father?” He laughs abruptly, pleased at having thrown a psychoanalytical softball. 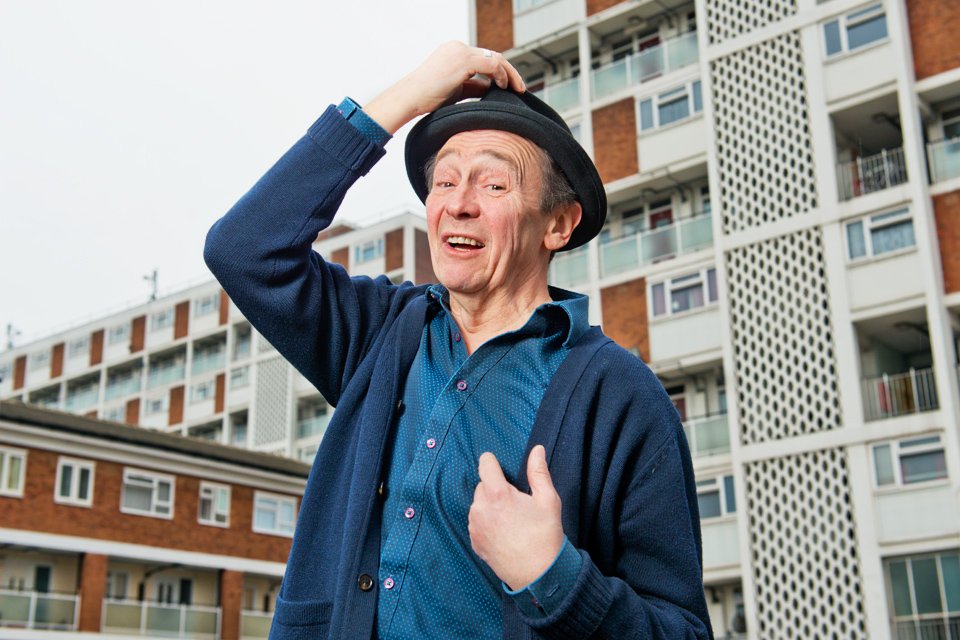 “So I was a bit reluctant initially,” he continues. “And also you have to be grown up. In comedy you never have to behave like a grown up. So it was very strange saying things like,” he switches voices again, to something between Packham and Attenborough. “Now this is the home of the native brown trout.” Another burst of laughter.

The less sedentary pace of an Only Fools and Horses musical will be more familiar territory for the comedian, though he jokes that the role of Grandad means he doesn’t have to move around all that much. The musical is the unfinished final project of the long-running sitcom’s creator John Sullivan, who died in 2011. His son Jim took up the mantle and brought the project to completion with the help of Whitehouse and the musical talents of Chas Hodges, who died in September of 2018.

“This show is Jim’s way of celebrating everything his dad has made,” says Whitehouse. “And now it’s honouring Chas too, who contributed a number of songs to the project before he died. It’s become even more poignant as we’ve been working on it.”

As well as performing on stage, the Welsh-born, London-raised Whitehouse has penned many of the show’s musical numbers. “The director CJ Ranger worked with Harry Enfield and me on our live show, where we did some improvised musical stuff,” he says. “She felt I would be able to bring something to this – she was a lot more confident in my abilities than I was, to be honest with you. I didn’t think I would be capable of doing this, but she saw something in me, musically.”

It’s sentimental, but not mawkish, because John always undermines it, pulls the rug from under the sentimentality with a joke. It’s a very working class thing. You can’t dwell on self-pity.

If Whitehouse is nervous about reviving a beloved sitcom routinely voted the nation’s all-time favourite, it doesn’t show. But his reverence for classic comedy does, and he reels off the shows and comedians that shaped his childhood with a certain doe-eyed nostalgia. Monty Python, Peter Cook and Dudley Moore, and Dick Emery to name a few. “It’s hard to overestimate the impact they had on people of my generation. They were massive, they really were, and they were so influential.

“And there’s such an affection for Only Fools too. It’s remembered so fondly. It’s a kind of dysfunctional family, isn’t it? There’s Del looking after his younger brother. He’s taken on the role of father and mother, he’s the carer, which feels very current. There’s a lot of drama, it’s not just gag after gag, and the relationships are fraught and feisty. It’s sentimental, but not mawkish, because John always undermines it, pulls the rug from under the sentimentality with a joke. It’s a very working class thing. You can’t dwell on self-pity.”

Just as beloved by its fans, The Fast Show often walked the same line between unexpected sincerity and straight-up comedy. I mention a sketch from the show’s sentimental farewell episode, in which Whitehouse plays the incoherent, brandy-nosed drunk Rowley Birkin, telling meandering wartime stories from his smoke-stained Chesterfield. Rather than ending with his usual punchline, “I’m afraid I was very, very drunk”, he turns the catchphrase on its head and hits the audience with a sobering tale of lost love.

Whitehouse snaps into character. “She had a… very long neck,” he laughs.

“Yeah, a lot of people remember Ted and Ralph, but the Rowley Birkin one was unexpected. There he was, and you can never quite understand what he’s saying as he recalls this romantic and intrepid life he’s led, and then it suddenly takes this dark turn. I remember Bob saying to me shortly afterwards, he’d been watching it and thought, ‘Oh, here he goes, he’s really going for it’.”

“I did a bit of Rowley the other night actually,” Whitehouse continues, “at Harry Hill’s charity fundraiser, Comedians Sing The Christmas Hits. You know the Mud song, Lonely This Christmas? In the middle of the live version he slurs his way through a spoken word section. Well I gave it a bit of the [incomprehensible Rowley Birkin] and it went down well. It was a bit of a relief, because Reeves had just dropped his trousers, so I had a difficult act to follow.”

Whitehouse also flexed his acting chops in Armando Iannucci’s 2017 satire The Death of Stalin, in which he played a bit part as the statesman Anastan Mikoyan. “Everyone lived in such fear of Stalin that they couldn’t even rescue the bloke,” he says. “It’s an amazing story. These despots and tyrants, they cast a spell on people. Though it’s not like I know many. Apart from Harry of course.” 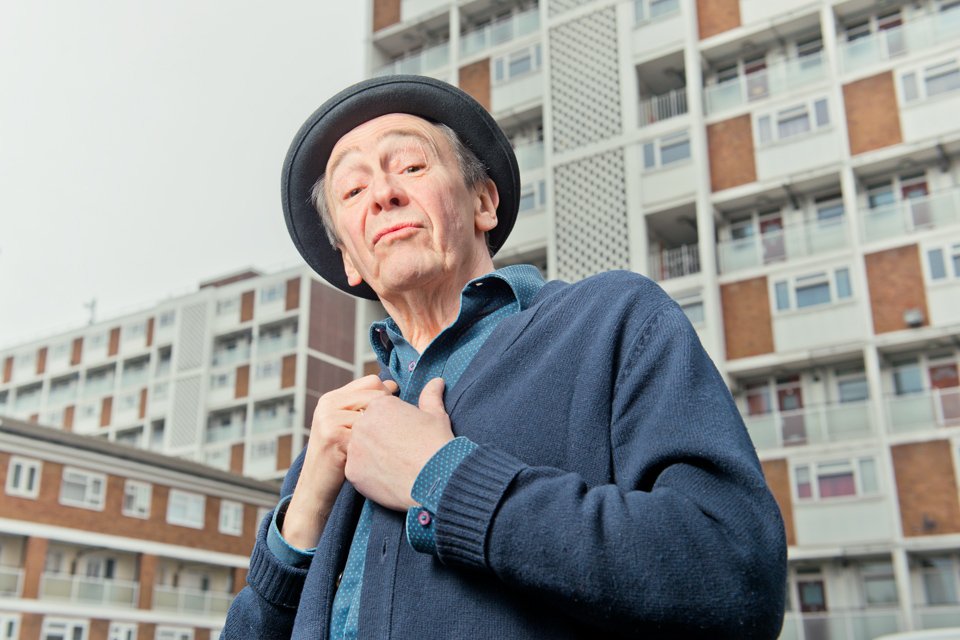 In 2015 Whitehouse wrote and starred in the four-part BBC Two sitcom Nurse, based on his Radio 4 comedy of the same name and about an overstretched mental health practitioner and her patients, played by Whitehouse in various degrees of makeup. The taboo around the topic was only just beginning to lift, and though today the show’s themes are more commonplace, the series wasn’t picked for renewal. For Whitehouse, the decision represented a shift in focus for the BBC, away from the kind of comedy he wants to create.

“It was a bit galling to say the least,” says Whitehouse. “Let me just get up on my soapbox for a minute. When we did Nurse, mental health was a big issue, but now it’s much bigger. The BBC axed it after one series of four episodes. Esther Coles is brilliant in it, she’s really underrated, and we thought it was a way of looking at some mental health issues that wasn’t too grim.

“At the time you’d only see these serious, hour long documentaries around mental health issues, and fuck me, those are a difficult watch. But there’s humour, even in mental illness, from the people who suffer from it and also from the poor buggers who work in it. That’s a tough, tough job.”

Whitehouse’s own mother worked in the profession. “She was a nurse in, well, in those days they called it a mental hospital. As you can imagine it was pretty grim, she told me a few tales.”

“So we were disappointed with the BBC’s response. I think we were ahead of the curve with Nurse. Everyone’s talking openly about mental health now, we’ve even got Wills and Harry banging the drum for it, so in a way we were vindicated. I spoke to [comedy writer and BBC television producer] John Lloyd about this. In the current climate his stuff would have been struggled to be successful, things would have been axed after one series and that would have been that. You wouldn’t have had Blackadder.

Comedy doesn’t sell like drama does. The risks the BBC take are now in drama, it’s all dead kids and that, isn’t it?

“The BBC, and I say the BBC because I like the BBC and I wouldn’t necessarily want to go anywhere else, should commission two series of everything. Give writers the chance to take risks and try things out. The Fast Show needed a series to get on its feet. And so did Only Fools and Horses. Unfortunately that’s not the climate any more.

“When Harry and I did Story of the Twos [the channel’s 50th anniversary special], we were able to plunder and mine and pay homage to all of this wonderful stuff that the BBC and the licence fee allowed to develop. So be careful what you wish for, all those people slagging off the BBC. They don’t take too many risks any more, and mainly – I promise I’ll shut up in a minute – mainly because comedy doesn’t sell like drama does. The risks the BBC take are now in drama, it’s all dead kids and that, isn’t it.”

The door opens, Whitehouse is summoned back to rehearsal, and from the next room we hear the Peckham-twang of Tom Bennett’s best “Rodney, you plonker”. The BBC may have momentarily turned its back on his brand of comedy, but Whitehouse hasn’t, and he’s come up with some ingenious ways to get his shows to air. “We took our fishing show, me and Bob, to factual. We thought we’d have a better chance of getting it made there, because it was about heart disease and fishing, you know.”

And if the audience just happens to have a laugh? Well that suits him just fine.

Paul Whitehouse stars in Only Fools and Horses The Musical, opening 9 February at Theatre Royal Haymarket. Tickets are on sale now.